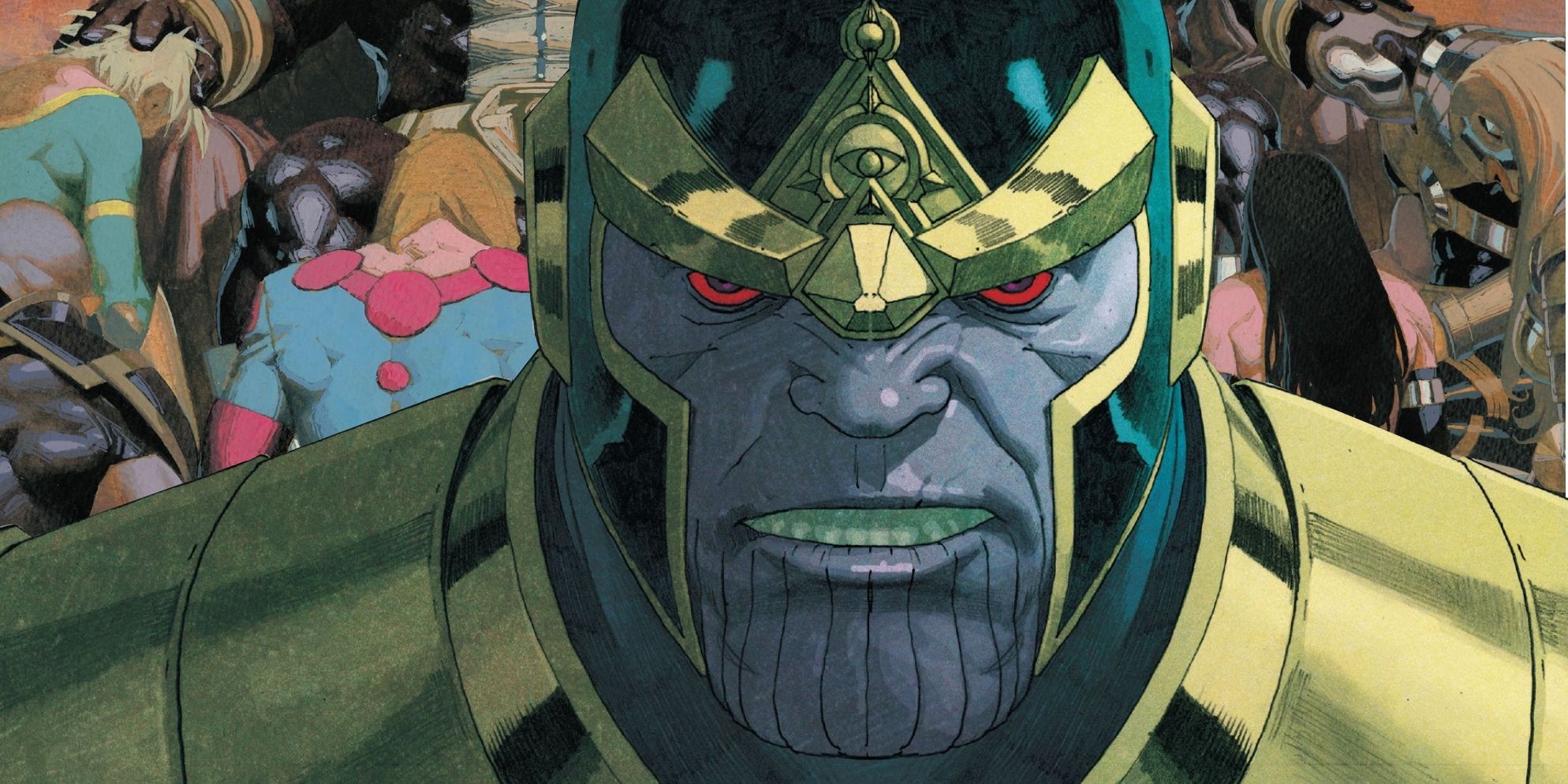 Warning! Spoilers ahead for Eternals #7

In the latest issue of Marvel Comics’ Eternals, it’s been revealed that the immortal beings have never been weaker or more divided, leading to Thanos gaining incredible power over all of them. In this new issue, the most heroic Eternals have left the greater society of Eternals after learning the darkest truth about their ability to resurrect, and as such, they’ve left the rest of the Eternals weakened, providing the perfect opportunity for Thanos to make a major move.

In previous issues of Marvel’s Eternals from writer Kieron Gillen and artist Esad Ribić, it was revealed that every time an Eternal is brought back to life after being killed, it costs the life of a human being. Unwilling to have their minds wiped of this discovery as has happened in the past, the heroic Eternals Ikaris, Sersi, Kingo, Thena, Sprite, and Phastos have all decided to venture to Lemuria, the realm of their rivals known as the Deviants to see if they can change and move past the dark nature of their immortality.

Related: Superboy Could Have Stopped Thanos’ Snap with One Finger

However, in the heroes’ absence, Thanos chooses to make his move in Eternals #7, being assisted by Druig who is naturally betraying his own kind in the hopes of gaining power by riding the Mad Titan’s coattails. While the Eternals were about to enter the Uni-Mind in order to reelect Zuras as the Prime Eternal, Thanos throws his own name in the ring, taking advantage of the Eternals’ current weakness and years of division under Zuras, offering greater power and a new age that will seemingly “set them all free”.

Now that Thanos has become the Prime Eternal over Zuras, it looks as though his power will expand as he’s now the ruler over the Eternals’ realm of Olympia, demanding the respect of his new subjects while promising them their own freedom and power (likely a false promise used to mask eventual oppression). Meanwhile, the obstacles facing the heroic Eternals in Lemuria are now greater than ever, seeing how they’ll have to defeat the Mad Titan before they can even begin finding a way for the Eternals to live while viewing the lives of humans as sacred (rather than as a sacrifice).

In any case, this new issue proves how weak the Eternals have been despite their great power, being so divided and opposed to one another’s goals that they actually ended up electing Thanos of all people to serve as their leader. However, it seems likely that Thanos would just as soon kill all of the Eternals before he’d lead them for an extended period of time, having ulterior motives and goals thanks to his new role in the Marvel Universe.

More: Thanos’ Fairy Sidekick is The Best Thing The MCU Cut From Comics

Kevin Erdmann is one of Screen Rant’s staff writers. With a major in Cinema Studies and a minor in Comics and Cartoon Studies from the UofO, Kevin is pretty sure he’s writing for the right site. While Kevin is a huge Marvel fan, he also loves Batman because he’s Batman and is a firm believer that Han shot first. Disney also shares a big part of his fan patronage. Kevin lives in Oregon with his wonderful wife and sinister cat who is no doubt currently plotting his demise.

Randall Emmett’s Alleged Messages To Other Women Leak; Lala Kent Posts Cryptic Instagram Story
Nurse Told Christine Quinn’s Husband That He Had to Choose To Save Her Or The Baby During Traumatic Childbirth
You Won’t Believe Which Character Jeremy Strong First Auditioned for on Succession
HSM’s Monique Coleman Reveals How Corbin Bleu Supported Her After She Had a Miscarriage
Single All The Way Review: Netflix’s Holiday Romcom Is Funny & Heartwarming