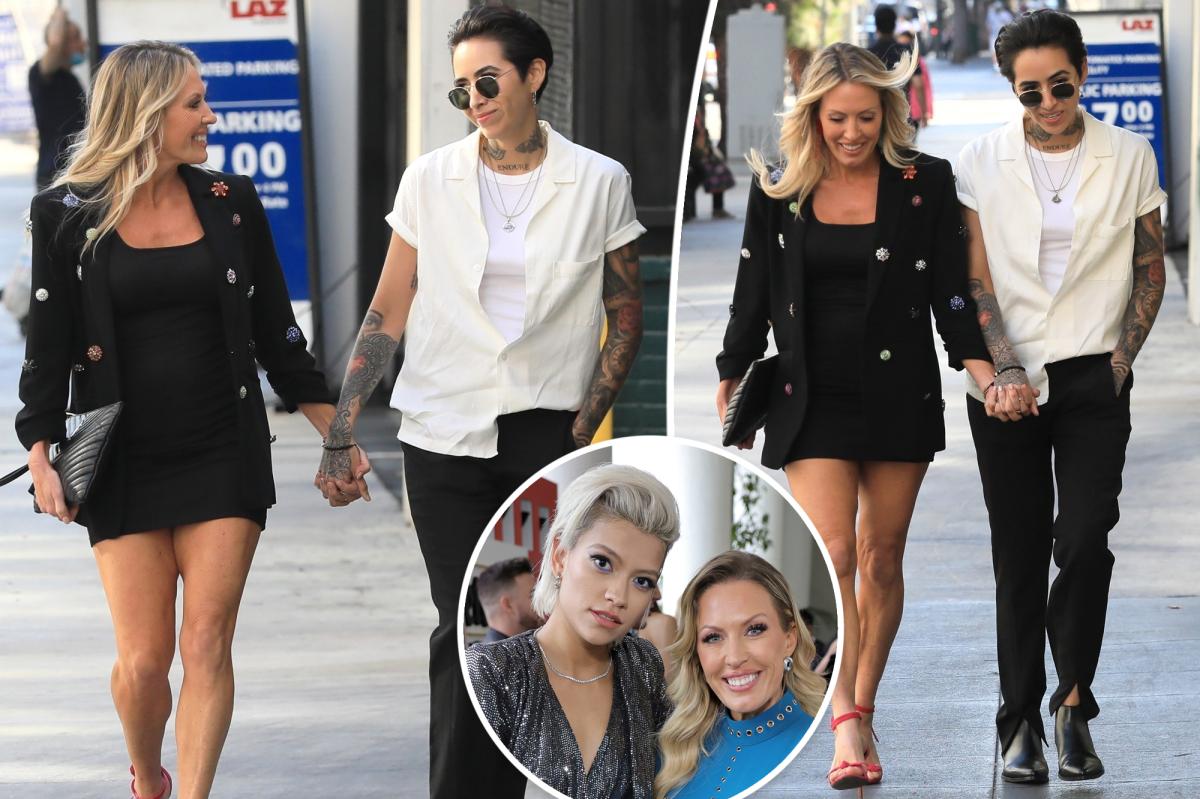 Less than three weeks after her split from Victoria Brito, the “Real Housewives of Orange County” alum was seen holding hands with another ex – her first girlfriend, Kris – in photos exclusively obtained by Page Six.

Windham-Burke, 44, and her former flame (whose last name has not been revealed) took a stroll through Downtown Los Angeles on Wednesday while on a romantic dinner date.

They also attended a private screening and Q&A event at Cages.

For the outing, the former Bravolebrity wore a short black dress beneath a jewel-embellished sport coat, which she paired with red heels and a black clutch.

Kris, for her part, opted for black shoes and slacks, a white tank top under a cream-colored button-down and round sunglasses.

Windham-Burke — who is still legally married to the father of her seven children, longtime husband Sean Burke — said in our exclusive video that she wants to get married again one day, she just has to “get divorced first.”

When asked whether that would be with Kris, the reality star replied, “Kris and I have always been friends. Kris and I love each other forever,” before Kris interjected, “We just have a great connection.”

We caught up with Windham-Burke last weekend in Southhampton, where she admitted it was “hard” putting herself back out there following her “heartbreak” from Brito.

The “RHOC” alum and Brito called it quits earlier this month after less than one year together – and, apparently, “the most amazing sex” ever for Windham-Burke.

“Long-distance relationships are hard, and that was no exception with Braunwyn and Victoria. While they spent a lot of time in New York, they both had to travel for work a lot,” an insider previously told us.

“Most recently, Vic had to travel quite a bit internationally, and the distance created communication strains in their relationship.”

Prior to that union, Windham-Burke had brief romances in 2021 with Jamie Parton and fellow “RHOC” alum Fernanda Rocha.

But Kris was the former Bravolebrity’s first public relationship after coming out as gay in December 2020.

Windham-Burke, who got sober in January 2020, dated Kris from December of that year to last April.

Shortly after, Kris moved on with “Pretty Wild” alum Alexis Neiers, but Windham-Burke was supportive.

“Alexis and Kris are both amazing women,” the reality star told us. “I have a lot of respect for Alexis and her work in the recovery and LGBTQ+ community – we have even worked together!”

She added, “Her version of a modern family is beautiful, and Kris is a wonderful addition.”

Meanwhile, Windham-Burke’s husband told us in April that he was “dating someone new” but did not disclose the identity of his lady friend.

George R.R. Martin Would You Like You To Stop Speculating About His Death
One Of Stephen King’s Strangest Books Is Now In The Works As A Movie
Carson Daly Recalls Fearing Death at “Insane” Woodstock ’99 Festival
‘Lisa Frankenstein’ – Carla Gugino and More Join Horror-Comedy from Writer Diablo Cody
Olivia Flowers says Taylor Green, Shep Rose breakup not ‘permanent’