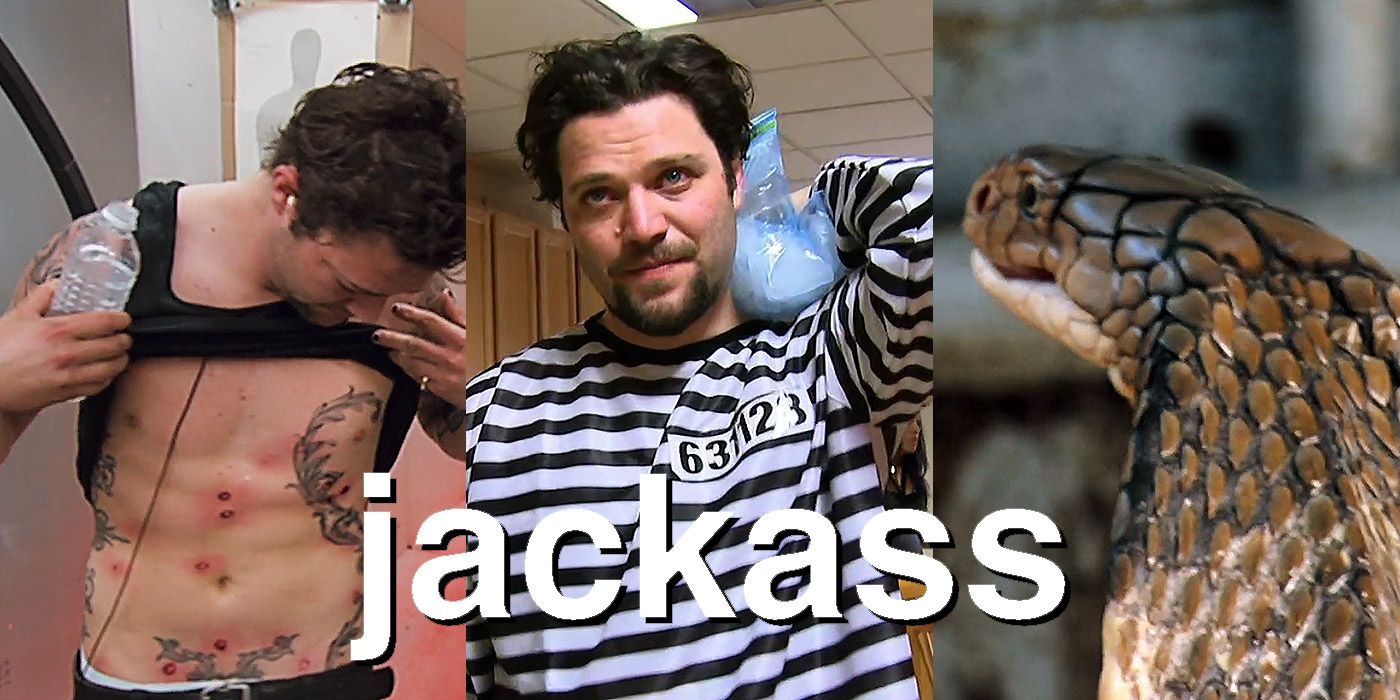 Bam Margera is currently involved in a lawsuit over his involvement, or lack thereof, with the upcoming Jackass Forever. That’s a shame, given that he’s a longtime, popular member of the group. Over the years, Margera has been a staple of Jackass, responsible for some of the most hilarious stunts of the entire franchise.

RELATED: The 10 Best Comedy Movies Of The 2010s, According To Letterboxd

However, there are also plenty of stunts that Margera completely regretted doing, for one reason or another. While they might have looked funny on paper, they quickly became more trouble than they were worth, and left Margera wondering why he’d signed on to perform them in the first place.

Things got wild when Margera joined Johnny Knoxville, Ryan Dunn and Brandon DiCamillo on a golf course, where they played destruction derby with some golf carts. At first, it was all fun and games as they smashed into various objects and one another.

However, the final jump triggered one of Johnny Knoxville’s most dangerous Jackass stunts, landing him right on his head and neck, which could have killed him. Suddenly, the tone of the entire scene shifted, and Margera expressed a lot of regret, claiming it was the “worst thing that could ever happen.”

Margera teamed up with skateboarding legend Tony Hawk for this hilarious scene that had them dressing up in fat suits to pull off a bunch of stunts. Their remarkable skateboarding expertise was on full display, all the more impressive given the size of the suits they were wearing.

At one point, Margera attempted a jump that snapped his skateboard in half, sending him face-first into the floor. In another scene, he fell off his board, only for it to roll underneath his arm and hit him square in the jaw.

For some odd reason, Margera felt it wise to subject himself to one of the most excruciatingly painful things imaginable. Together with Knoxville and Dunn, he ventured out to a farm to get himself a brand, right on the behind.

Dunn was in charge of heating up the brand and sticking it straight on target. The pain caused Margera to flail about, inflicting his posterior with several painful-looking brands in the comical shape of male genitalia. Later, he showed his parents the agonizing end result. His mother was horrified while his father just looked disappointed. Ironically, Margera’s weird relationship with his family would end up creating Unholy Union, one of the best Jackass spinoff shows.

The Jackass crew enjoys taking normal, everyday objects and turning them into twisted parodies of themselves. Margera volunteered to sit at the top of a strongman’s weight while Chris Pontius hit it full force with a hammer.

The impact of the strike caused a certain sex toy to fire straight up like a rocket, nailing Margera straight in the posterior. It didn’t look particularly pleasant, but the greater question is what got bruised more: Margera’s butt or his ego.

Margera got pranked by his own crew during this stunt, which started off as nothing more than him getting thrashed by a large wind turbine while standing inside the back of a cattle trailer. After he was knocked to the ground and left in a daze, the crew quickly rushed in, sealed him behind a gate, and fed a king cobra through the bars.

The cobra was de-venomized but no less aggressive, rearing its hood and staring menacingly at Margera, who freaked out. Margera has a deep-seated fear of snakes, and facing down one of the most dangerous and intimidating serpents on the planet was an experience that must have made him regret the entire stunt.

Margera wasn’t quite as willing to perform the kind of outrageous stunts that Steve-O was best known for, be he did have his moments of glory. In this scene, Margera had his reservations, based purely on how painful the stunt in question looked. The premise was for him to stand with Knoxville and Dunn in front of a conceptual weapon system designed for riot control, which fired hundreds of round rubber balls at explosive speeds.

He did the stunt but soon regretted it. The resulting impact caused all three to keel over in pain, but Margera got it the worst. His chest and stomach were riddled with impacts from the rubber balls, which knocked the wind out of him while inflicting severe pain.

One of the funniest Jackass stunts of all time was Electric Avenue, which involved filling a cramped hallway with lots of dangling stun guns, tasers and cattle prods. Nobody looked particularly enthusiastic about doing the stunt, but Margera volunteered to go first.

The result was a hilarious few seconds worth of comedy gold when Margera took multiple hits from the swinging devices, which launched him into orbit, and sent him crashing down onto one of the tires that sat on the floor. He quickly expressed total regret at having participated in such a horrible stunt.

Super glue is a mischievous boy’s favorite toy, so it was only natural that the Jackass crew would love it. This scene involved using super glue for a wide variety of hilarious effects, including yanking chest hair off of one another. Margera lathered up his hands in the stuff, then placed them on the chests of Preston Lacy and his own father, Phil Margera.

The resulting yank left him with furry palms, which looked just as regretful as it did hilarious. He even did it again, this time clutching Dunn’s beard before ripping it off. While he looked amused, Margera undoubtedly felt regret at the horror of seeing someone else’s hair stuck to his palms.

Will The Farter (Jackass 3D)

One of the most juvenile Jackass stunts occurred in the third film, when the gang brought in a guy dubbed “Will the Farter,” who was capable of exerting enormous and precise control over his own flatulence. He started off demonstrating his skills with party supplies and other objects, before moving onto more creative things.

He really surprised by the crew by using his special skills to light a cigarette, then giving it to Margera. For some odd reason, Margera felt it would be a good idea to smoke it, which he instantly regretted. It was one of the grossest moments of the entire film.

Margera’s fear of snakes came back to haunt him once more in the third film, much the same as it had in the second. This time, he was tricked into a stunt that had an ulterior motive attached to it. The idea was for him to go after director Jeff Tremaine by throwing water in his face, then sacking him with a punch from a boxing glove.

However, the gang had laid out a fake floor for him, trapping him just moments before he did the deed. While Margera was stuck in the makeshift pit, the crew started dumping in live snakes of various shapes and sizes. Margera was traumatized by the experience as he faced down his most nightmarish phobia.

NEXT: 10 Comedy Movies With A High Rotten Tomatoes Score But A Much Lower IMDb Rating

Derek started writing about video games at age 14 and went on to write for GamePro Magazine and several other prominent outlets. He now brings his veteran pop culture XP to ScreenRant.