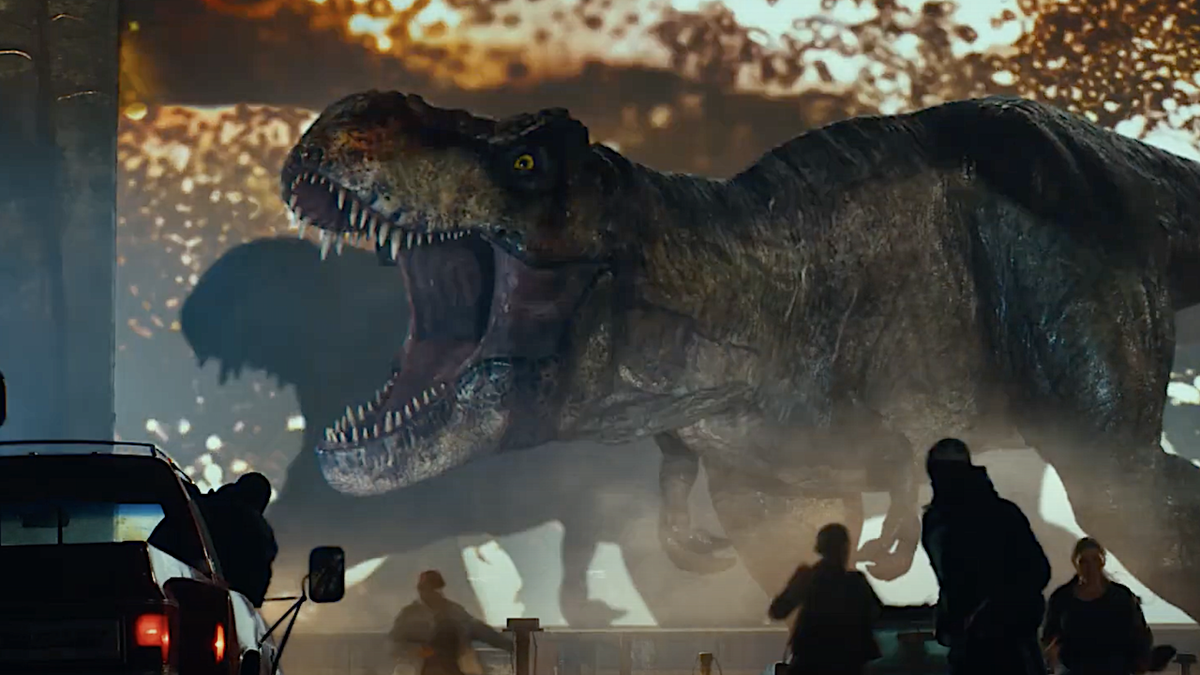 The Jurassic franchise has always maintained a direct link to the past. Like, the distant, distant past. The first movie came up with an ingenious way to transport dinosaur DNA to present day so that sketchy scientists could manipulate to create the most dangerous park mankind has ever seen. The franchise continues next year with Jurassic World: Dominion, and a new Prologue video gives us a hint where these predators came from… and what kind of damage they will be able to bring when they are unleashed into our society. The dinos have officially left the island, and we will never be the same.

This prologue for the upcoming sequel Jurassic World: Dominion played in IMAX theaters before Universal’s other slam-dunk sequel, F9, but this is the first time that audiences are able to see it from the safety of their own home. Which is comforting, because I’m not sure I’d want to be sitting in a movie theater while seeing footage of a T-Rex tearing a movie theater apart. I understand the concept of immersion, but that’s a bit too much for me!

By this point in the Jurassic World timeline, we have seen plenty of dinosaurs. And those terrifying beasts have even made their way over to the mainland in a few movies, notably Steven Spielberg’s Jurassic Park: The Lost World, and the most recent Jurassic World: Fallen Kingdom. It’s from that movie that Dominion is expected to continue, because if you will recall, that movie ended with dinosaurs infiltrating our communities. It’s one hell of a cliffhanger, and we’re eager to see where the series can go from here.

But the real hook of Jurassic World: Dominion will be the return of the “Holy Trinity” of the series, the original Jurassic Park stars Sam Neill, Laura Dern and Jeff Goldblum, who will reunite on screen in a Jurassic movie for the first time since 1993 — though each has dabbled with returns to the series over the years. Nostalgia is a powerful fuel for movies these days, and the return of Jurassic World undoubtedly meant that Universal would pony up the resources to get the shining stars back under one roof. How they will factor into the story alongside Jurassic World standouts Chris Pratt and Bryce Dallas Howard is still unknown, so we’ll have to wait for the first real trailer so it can give us clues.

Take note that none of the footage featured in the Prologue above will appear in Jurassic World: Dominion. The clip merely serves as a crash course on the full extent of the history of this franchise, spanning millions of years, and reminding audiences about the pesky mosquitos that inadvertently created this carnage in the first place. We will be able to see the fruits of their “chaos” when Colin Trevorrow’s Jurassic World: Dominion stomps into theaters next summer, landing on June 10, 2022.