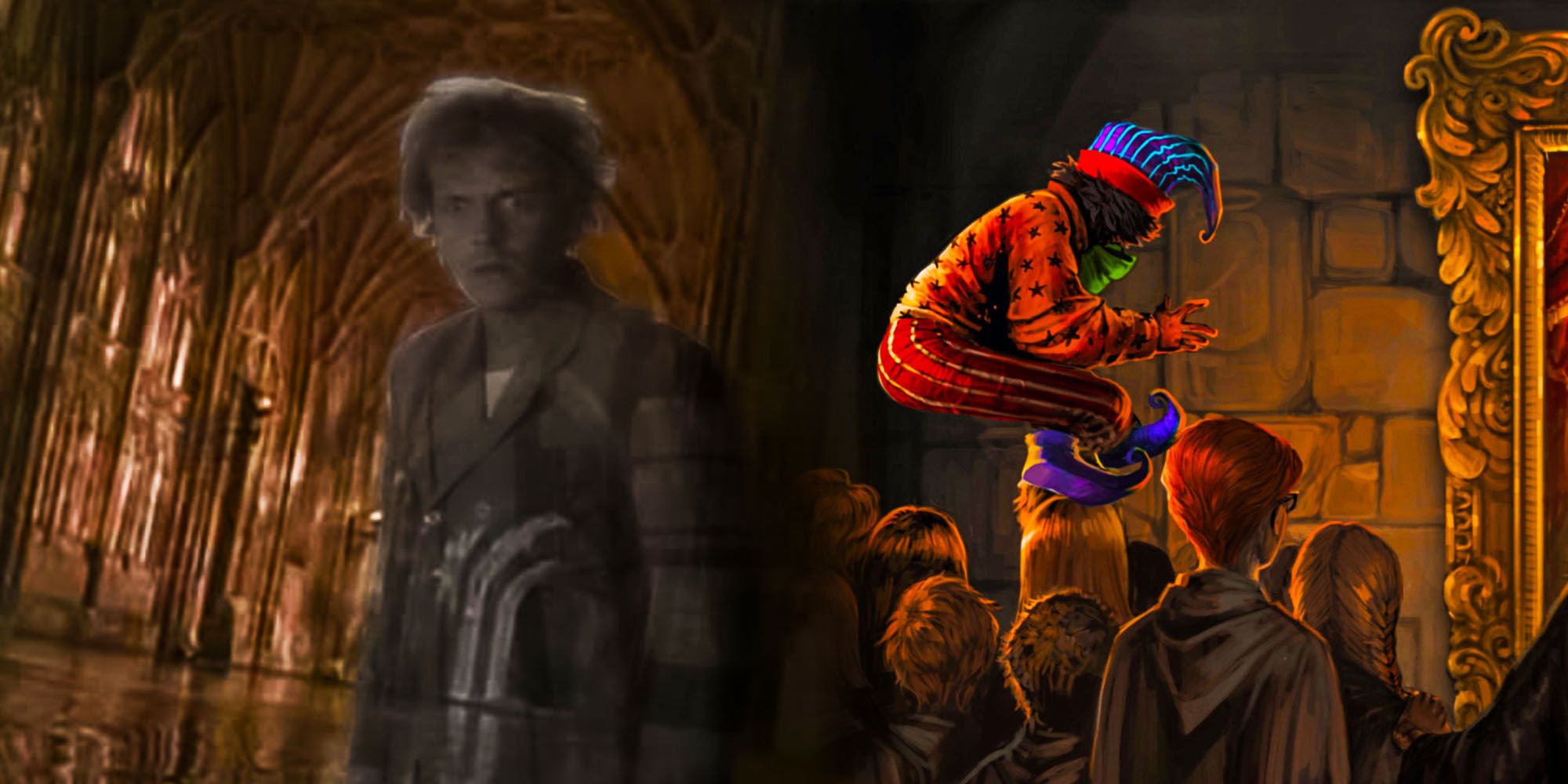 Peeves the Poltergeist was sadly cut from Harry Potter and the Sorcerer’s Stone, but there are several details about the character’s discarded scenes. Harry Potter and the Sorcerer’s Stone kicked off the magical Warner Bros. franchise in 2001. Now twenty years later, the Harry Potter cast is reuniting for Harry Potter 20th Anniversary: Return to Hogwarts. Daniel Radcliffe, Rupert Grint, Emma Watson, and several cast members from all eight films will appear in the upcoming special from HBO Max. Director Chris Columbus, who helmed the first two films in the franchise, is also set to appear in the retrospective event.

Though Harry Potter and the Sorcerer’s Stone was wildly successful at the box office, the film cut several elements from author J.K. Rowling’s book. For instance, the film entirely omitted Snape’s (Alan Rickman) defense for the Sorcerer’s Stone. In the book, Snape includes a potions riddle for protection. Additionally, smaller moments, such as the Sorting Hat singing a song and Fred Weasley (James Phelps) and George Weasley (Oliver Phelps) pulling a prank on Professor Quirrell (Ian Hart), didn’t make the movie.

Despite the other omissions, the film didn’t always ignore Peeves. Rik Mayall had the role in the movie, and Columbus even shot scenes with the actor. Unfortunately, Peeves’ scenes didn’t make the movie’s final cut, but Columbus recently said in an interview (via The Wrap) that he wants the original 3-hour version with Peeves released. ”We have to put Peeves back in the movie,” he said. Though the footage of Peeves isn’t available, actor Chris Rankin, who played Percy Weasley, revealed in an interview (via YouTube) that Peeves showed up early on. The Harry Potter character wasn’t cut initially and made an appearance when the Gryffindor students were going to the common room, getting a scene similar to his original intro in the books.

Rankin shows part of the script during the interview, confirming that Peeves’ intro was close to his book scene. In J.K. Rowling’s first Harry Potter book, Peeves throws walking sticks as the Gryffindor students head to their common room, and the script shows Peeves’ scene was similar. The script explains that Harry spies a bundle of walking sticks floating in midair as the students walk down a corridor. “Without warning, the walking sticks come flying forth,” reads the script. Like in the book, the first-year students duck away and dodge. However, Percy simply “sighs in annoyance.”

Since the Harry Potter film was faithful to Peeves‘ first significant scene, other Peeves book scenes are also possibilities. For instance, Peeves could’ve shown up to prank students on their way to class. At one point, Professor McGonagall kicks the poltergeist out of a room for writing rude words on the blackboard. In another book scene, Peeves tries to snitch on Harry and his friends for being out of bed after hours. Unfortunately, since the footage isn’t available, fans will likely have to wait for Chris Columbus’ 3-hour cut of Harry Potter and the Sorcerer’s Stone to see the character, as much as that might peeve some of them off.

Bill is an experienced reporter who’s covered entertainment and fandom since 2014. He’s done everything from unearthing the discarded Game of Thrones pilot script in a library in Texas to finding out why Steve left Blue’s Clues. He also enjoys eating Taco Bell and drinking chocolate milk.