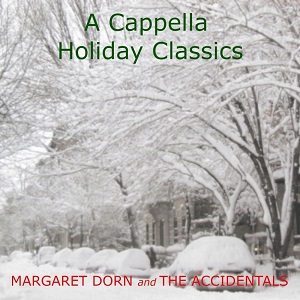 I’m a bit of a grinch when it comes to holiday music. It’s not just that it’s repeated ad nauseam from November to somehow January depending on where you live, but I’ll be frank, it’s that some of the songs just aren’t very good. This isn’t meant to be a slam piece against Christmas music, because Margaret Dorn and The Accidentals, the acclaimed a cappella group and their new album “A cappella Holiday Classics” actually reignited my love for the music, but potentially the holiday season as well. I question how deliberate the track listing was, and let me emphasize there are a LOT of tracks here ranging from the standard church hymns, (“Joy to the World”) classics you’d hear from Crosby, Nat King Cole, etc (“The Christmas Song”, “Have Yourself a Merry Little Christmas”) and more commercial fare like “Frosty the Snow Man” or “Winter in Manhattan”.

Truly Margaret Dorn and The Accidentals planned from the get-go to spoil us with plenty of holiday riches and that means that there is something for everyone here, that helps keep the album feeling fresh and on your toes. I can guarantee it’ll go over incredibly well playing at family get togethers. Something that I also enjoy about the record is that it actually introduced me to songs I wasn’t familiar with before now. “Bring a Torch, Jeanette Isabella” has this wonderfully peppy spirit to it that feels almost storybook-esque. “In Dulci Jubilo” has this almost ethereal royal connotation that makes you feel like you can hear it echo in a large space or church. The group consisting of eight members are shine, and due to it being an a cappella group, standouts aren’t really point of discussion since all voices flow so seamlessly together, without anyone stepping on anyone’s toes.

They operate like a finely tuned machine and despite feeling like a distinct single entity, you can feel the warmth emanating from every member. The group has had tons of airplay in film and television and plenty of concert appearances and for obvious good reason. I’d probably argue that the best song on the entire album is their medley, not just for the way they were able to combine so many songs effortlessly, but because of the true labor of love you can feel in it. Obviously if you’re someone who doesn’t celebrate Christmas, I can’t exactly expect you to come rushing to hear this, but for holiday music enthusiasts, musical scholars, and a general public, it’s a stellar album. I think the greatest gift that could come out of the near future is being able to see this group perform live.

Take a moment to visit their website and every member seems like a person who was born with a spark in their soul to perform and its audible in the work. I may have been a grinch when I started listening to this album, but by the midway point, even the familiar songs felt fresh and reminded me of what many people love about this holiday season.