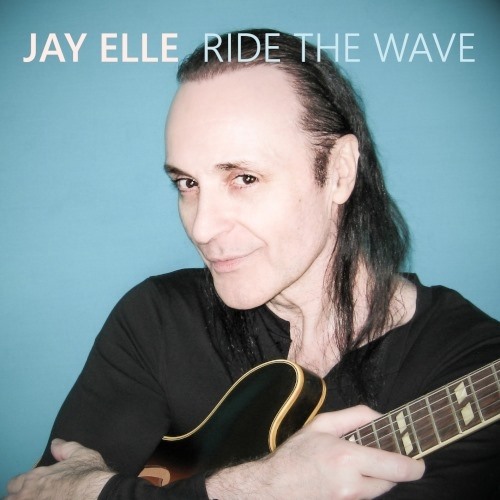 There aren’t many Bob Mould types rocking the alternative underground these days, but much to my surprise, the new record Ride the Wave from singer/songwriter Jay Elle takes the spirit of late-80s/early-90s indie rock and brings it into a full-color modernity I was pleased to encounter this August. Rather than putting all his stock in the brilliant lyricism of “She’s So Fine,” “Insane,” “Rainy Day,” and “Who’s Camille” alone, Elle is spreading the catharsis around every component of the tracklist here, starting of course with the bittersweet guitar parts that give this record every one of its brightest moments.

The heart in Ride the Wave centers on harmony in “Morning Rain,” “Twelve on Sunday,” and “Angeling,” but I don’t ever feel like this record is dependent on its hooks to make a big statement to the audience. Instead, the plaintive lyrics of the title track and “Better Luck Next Time” stand on their own as agents of evocation, never pushing us away from the instrumentation but also coexisting with the melodies rather than getting embedded in them. It’s a credible alternative to mainstream songwriting, which is exactly what attracted me to this player over his rivals in the first place.

There’s really no instance of Elle holding back from us lyrically in this LP, but instead giving it to us with everything he’s got in tracks like “Want Me Bad” and the previously noted “Insane,” the latter of which might be the most single-ready piece here. While he doesn’t sound like he’s straight-up purging, you can tell he was looking to shed a lot of emotional weight in this record, and his willingness to do whatever it takes to get to his goal winds up being one of the more inspirational parts of the music, at least as it comes together in some of the songs.

I like how unafraid of texture Jay Elle is in “She’s So Fine” and “Tequila Kiss,” even though his voice is made to compete with a steady stream of profoundly punchy instrumental strength taken right off the stage and compressed for this EP. He’s using the overdrive – and even the absence of distortion – as a means of advancing the mood here, and though this isn’t a new idea in alternative rock, it’s made to sound pretty unique when juxtaposed beside some of the other stuff his fellow singer/songwriters have been producing through the pandemic.

There’s a touch more physicality in this LP than I was initially expecting, but added up with the talent he has as a vocalist and lyrical mastermind, Jay Elle really does sound like an old pro who has earned his place in the hierarchy of respected indie players in Ride the Wave. While it’s got a deceptive name in terms of refusing to allude to the originality it has to offer, Ride the Wave is an otherwise exquisite means of getting to know who this player is and what he’s becoming, and overall I think that’s why I’d give Elle’s new album a coveted five out of five stars.

Watch Lana Del Rey Perform “Arcadia” on Colbert
Why Tim Burton’s Beetlejuice 2 Is Such A ‘Hard’ Film To Make, According To The Sequel’s Former Writer
Then and Now: See Jerry Maguire Star Jonathan Lipnicki and More Former Child Actors All Grown Up
Jennie Nguyen’s Niece Accuses Her Of Faking Storylines For Real Housewives Of Salt Lake City
James Gunn Reveals What Was Planned For GOTG One-Shot Prequels