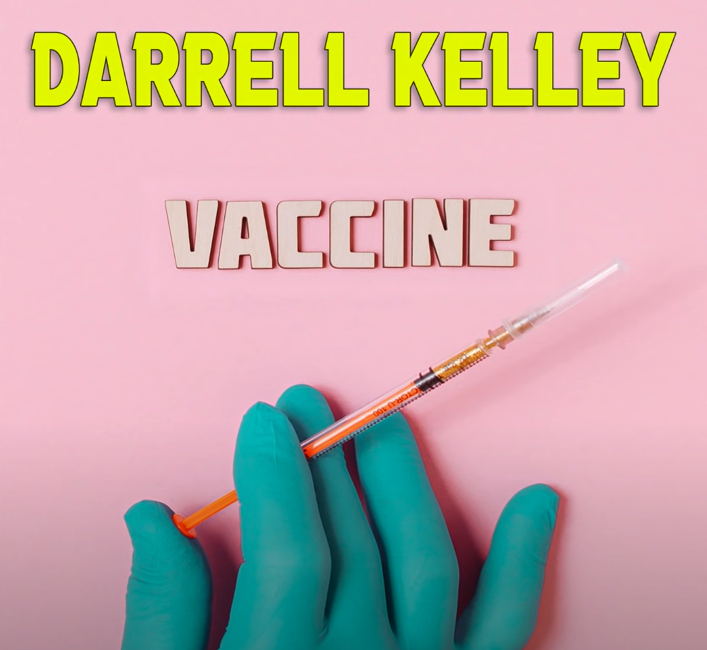 Remember in March when we all said to ourselves “oh, this is weird. I’m sure this’ll only last a few weeks.” Now it’s March 292nd and we still don’t have any concrete idea when this will be over. Also at the time of this writing, a new Covid-19 strain has been detected and is currently active in the US. When it rains it pours right? Pop Culture has certainly had an…interesting time adapting to the pandemic. We’ve had plenty of movies and TV shows try and address it to mixed results. Music as a whole has come out decently unscathed.

Well, released music. I have no idea when we’ll be able to go to concerts again. A lot of people have really taken to music as their primary form of escapism from a very difficult world right now, and we’ve had our handful of topical releases addressing the virus. Atlanta based R&B and Gospel singer Darrell Kelley has now joined the fray with the release of his newest single “Vaccine.” Upon first listen, I couldn’t tell if this was a parody song or not. It’s not to say there’s anything about its lyrical content or even its production that screams “this is a parody”, I think I was just taken aback by its transparency about the information and tone it was trying to convey. It’s not a particularly subtle song, but it’s 2020, subtlety has had its day. Kelley is no stranger to socially relevant music. This year alone he’s released songs about the Coronavirus itself, the death of Breonna Taylor, Black Live Matter and more.

The man never stops, and I honestly have to applaud him for it. It’s also really nice to see an artist take a stance on the vaccine itself. I won’t share my opinions on it, because it’s irrelevant, but I’ve seen so much thumb twiddling and indecisive stances on socially relevant issues, that hearing someone say exactly how they feel and not mince any words about it is shockingly refreshing. Kelley isn’t asking for much, he just wants the vaccine to work and for things to go back to normal. It’s a very uncomplicated anthem, and though some of the production leaves a bit to be desired and some delivery could use an adjustment or two I found myself quickly won over by its scrappy charm and to be honest, a pretty catchy beat.

What’s even more shocking is that for a song that’s only three and a half minutes, it’s over pretty quickly. That’s not a knock against it, if anything it makes you want to listen to it again and again. It’s impossible to know what 2021 will hold, but we know we can count on Kelley to have some signature commentary and beats on it all.

The music of Darrell Kelley has been heard all over the world in partnership with the radio plugging services offered by Musik and Film Radio Promotions Division.  Learn more https://musikandfilm.com

Find Out the Sweet Story Behind Jason Sudeikis’ Tie-Dye Hoodie at the 2021 Golden Globes
Chasten Buttigieg shares horrifying story of being confronted about his sexuality at work
Below Deck Sailing Yacht’s Captain Glenn Sounds Off on His “Crazy” Season 2 Crew
This $17 Crossback Tank Has Over 5,933 5-Star Amazon Reviews
Techland Celebrates 6th Anniversary of ‘Dying Light’ With New Event And DLC