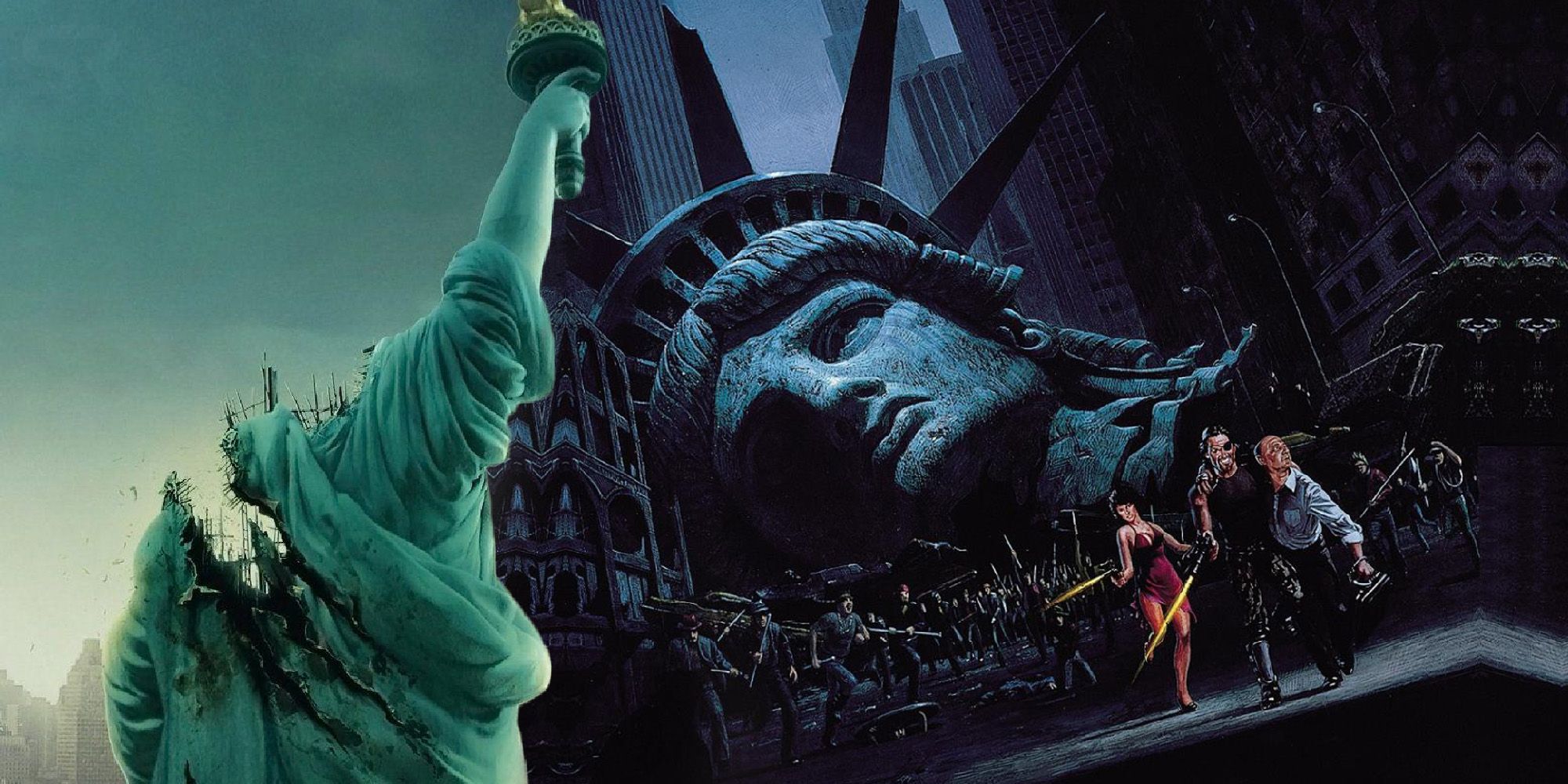 Here’s every time sci-fi movies have destroyed the Statue Of Liberty. For decades now, sci-fi filmmakers have demonstrated a preoccupation with destroying America’s iconic symbol of freedom. From Spaceballs (1987) to Independence Day (1996) to Deep Impact (1998), it’s almost as if subjecting Lady Liberty to explosives, alien energy beams, or tidal waves has become a kind of shibboleth within the world of contemporary sci-fi. If the statue isn’t destroyed by the film’s conclusion, viewers may doubt its legitimacy as American sci-fi.

The metaphorical underpinnings of Lady Liberty’s destruction are deceptively complex. Though the real-life Statue of Liberty that stands in Upper New York Bay symbolizes mutual goodwill between France and the US, the statue has an alternate name, based on an 1883 sonnet by Emma Lazarus. This alternate name, “Mother of Exiles,” reflects the statue’s role as a beacon of hope for the millions of immigrants who ventured to the US seeking asylum and opportunity. By obliterating the statue, filmmakers like Franklin J. Schaffner not only generate some of the most stunning visual effects in cinema history, they also imply the breakdown of America’s most fundamental vision of itself. It’s little wonder, then, that so many films that feature a ruined Statue of Liberty take place within wildly dystopian settings in which society is pushed to its breaking point.

The following analysis accounts only for full-scale destruction. Although Lady Liberty gets dilapidated in Judge Dredd (1995), frozen/submerged in The Day After Tomorrow (2004), possessed in Ghostbusters 2 (1989), and generally degraded in a number of other movies, partial destructions belong to a different conversation. Escape from New York (1981) doesn’t make the cut, either; although the promotional poster features a severed Statue of Liberty head, no such image appears in the actual film. Here’s every instance that does count.

Schaffner’s Planet of the Apes (1968) marks what might be the most iconic Statue of Liberty destruction ever captured on film. Initially, astronauts George Taylor (Charlton Heston) and Nova (Linda Harrison) believe they have time-traveled to an exotic planet populated by apes who speak fluently and lord over their less intelligent human underlings. The Statue of Liberty’s introduction at the very end of this film is distressing because it indicates that Taylor and company have remained on earth all along. Further, the statue’s scorched appearance indicates that at one point humankind crippled itself, possibly by way of a nuclear blast. According to this film’s rather dark vision, humankind has committed the ultimate folly, and Lady Liberty can no longer remain upright.

The scene was so memorable that roughly twenty years later, Mel Brooks revisited it for his satirical Spaceballs (1987). Taking full comedic license, Brooks figures Lady Liberty as the “Mega Maid,” an enormous spaceship/ robotic maid who vacuums the atmospheres of lesser planets. Mega Maid ends up self-destructing in space, only to crash land on a beach with a crew of “spaceballs” inside. When this crew, led by a diminutive Darth Vader parody known as Dark Helmet (Rick Moranis), emerge from the Mega Maid’s nostrils, Brooks slyly inverts the original scene by casting a pair of humanoid apes on horseback as the scene’s focal characters. As one ape remarks, “Spaceballs? Oh, sh**. There goes the planet.” In both films, it’s human error that leads to the statue’s ruin.

Joel Schumacher’s widely maligned Batman Forever (1995) may not qualify as conventional sci-fi, but Gotham’s high-tech aesthetic, coupled with neon-clad street gangs and the Riddler’s futuristic, brain-scanning “box” certainly qualify as sci-fi elements. In stark contrast to Planet of the Apes, this movie opts to open with an act of statuary violence. A botched chase sequence leaves Batman (Val Kilmer) fighting a scenery-chewing Two-Face (Tommy Lee Jones) inside an unpiloted helicopter. Two-Face bails with a parachute, while Batman high-dives into Gotham Harbor, leaving the helicopter to plow into the Statue of Justice’s face. The movie’s setting may be Gotham City, but the statue looks virtually identical to New York’s Lady Liberty, and its defacement underscores the very tangible threat that Two-Face poses to basic democracy, along with the peace and safety of all Gothamites.

Related: Every Joel Schumacher Movie Ranked From Worst To Best

Beginning with Roland Emmerich’s Independence Day (1996), the late 90s gave way to a series of disaster films that were absolutely fixated on wrecking as many national monuments as possible. Predicated on an alien invasion that can only be thwarted by Captain Steven Hiller (Will Smith) and tech expert David Levinson (Jeff Goldblum), this film is arguably most famous for its destruction of the Capitol Building, though the Statue of Liberty gets totaled as well. In contrast to Schumacher, Emmerich, who has built an impressive stable of disaster films, carries out the statue’s death offscreen. An early scene tracks an alien spaceship as it blots out the sky so that the statue’s face is obscured by shadow. Later in the film, after the aliens have begun to attack by way of synchronized energy blasts, the statue appears lying face-down as a vast alien ship passes overhead. The quiet drama implied in Emmerich’s imagery renders it all the more evocative.

Both Mimi Leder’s Deep Impact (1998) and Michael Bay’s Armageddon (1998) feature deadly comets hurtling toward earth. But while Deep Impact focuses mostly on tasteful drama and a relatively conservative use of effects, Armageddon wows viewers with its rock & roll tone, star-studded cast, and bottomless well of visual effects. Bay’s movie pulverizes the Chrysler Building with a series of smaller comets, but leaves the Statue of Liberty intact. In Deep Impact, Leder opts for a very kinetic, onstage destruction of several US landmarks, including the pre-9/11 Twin Towers. During the movie’s climactic third act, Jenny Lerner (Téa Leoni) and her estranged father Jason Lerner (Maximilian Schell) reunite at her childhood home on the East Coast. Moments later, the looming comet strikes the Atlantic, displacing clouds and raising a massive tidal wave that flattens the Eastern Seaboard and tears the Statue of Liberty from its mount. Unlike in Spielberg’s A.I. (2001), this isn’t the kind of gentle immersion that leaves the statue wet, but otherwise functional; the beloved icon is undoubtedly ruined.

Monster movies are particularly dangerous for the Statue of Liberty. One of the more understated instances of destruction belongs to Ryûhei Kitamura’s Godzilla: Final Wars (2004), the 29th entry in the Godzilla franchise, marking a full 50 years of destructive monster action. This time, the Xiliens free a litany of monsters to flatten city skylines, bash famous landmarks, and generally run amok. The enormous, Pteranodon-like Rodan is placed in charge of ravaging New York City, and presumably, it’s this creature who ends up toppling the Statue of Liberty. A wide shot in the film’s second act reveals the statue knocked from her mount and half-sunken in New York Harbor, her torch arm broken. Echoing films like Emmerich’s Independence Day, Kitamura chooses to stage the actual moment of destruction offscreen. This is a curious move, considering that Godzilla: Final Wars ends up retconning Emmerich’s Godzilla (1998) from its storyline in an unceremonious fashion.

Like Godzilla: Final Wars, Matt Reeves’ Cloverfield (2008) involves an enormous monster whose prime motivation is to destroy New York City, though this particular monster is gangly, fish-tailed, and parasite-ridden. Reeves opts for a shaky, “found footage” style of photography. While some viewers found Cloverfield‘s erratic camera work disorienting, others insisted that the gritty feel helps sell the more dramatic scenes, including the moment when Rob Hawkins (Michael Stahl-David) and his friends leave their party in New York to witness the Statue of Liberty’s decapitated head rolling down the street.

Why is it still so common for sci-fi directors to destroy the Statue of Liberty? For starters, because the statue is shaped like a person, viewers may find that seeing it in a fallen state strikes an emotional chord that a more abstract monument wouldn’t elicit. Further, national landmarks are incredibly useful tools for filmmakers, since the vast majority of viewers will instantly recognize their metaphorical import. In other words, by destroying a monument as familiar as the Statue of Liberty (arguably the most recognizable American landmark), sci-fi movie filmmakers can rapidly deploy an important statement about the dysfunctional state of their cinematic world. Some viewers may find that after so many iterations, the Lady Liberty destruction formula is played out at this point, but given the enduring reputations of hits like Independence Day and Cloverfield as well as more under-the-radar sci-fi classics, it seems unlikely that filmmakers will stop wreaking havoc on America’s beloved statue.

Next: What Happened to Will Smith’s Sci-Fi Movies?

The Trial of the Chicago 7 Cast: What Each Character Looks Like In Real Life
Related Topics

Nickalus Rupert is a Pushcart Prize-winning writer located near the Gulf Coast of Florida. In 2019, he completed a PhD at the University of Southern Mississippi. He is author of Bosses of Light and Sound, a forthcoming short story collection from Willow Springs Books.