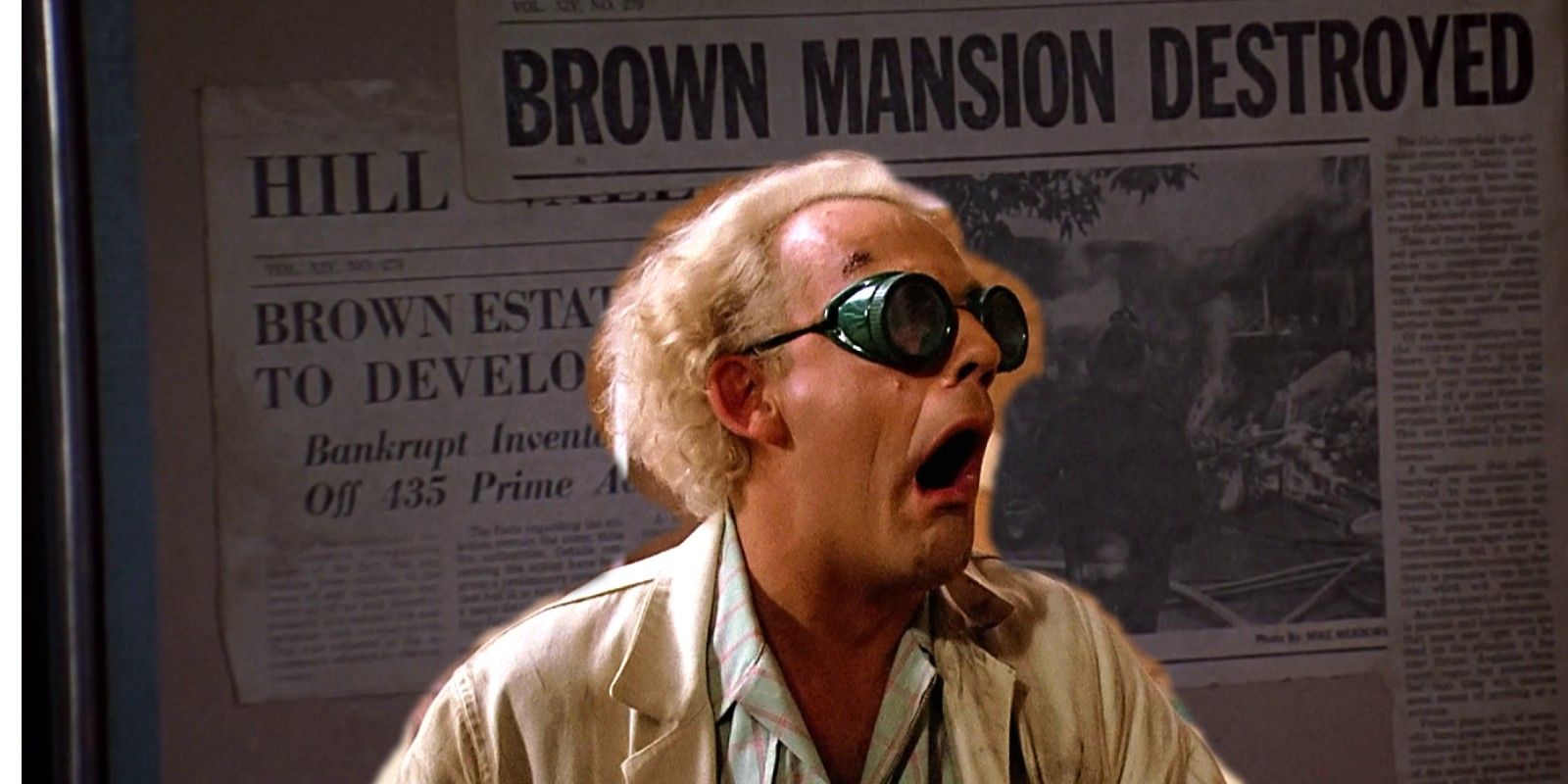 Bob Gale, who wrote Back to the Future, suggests that Doc Brown committed insurance fraud by burning down his family mansion for the money. The 1985 movie was a smash hit, spawning two sequels and turning Michael J. Fox into one of the most bankable stars in Hollywood, as well as making Christopher Lloyd’s portrayal of Doc Brown the gold standard for mad scientists for years to come.

Brown is the catalyst for the movie, creating the Delorean time machine powered by nuclear fusion (though in an early draft it was a normal time machine powered by soda) and sending Fox’s Marty McFly back in time to make sure his parents meet and have him. At the beginning of the first movie, the camera pans over a number of clocks and whacky inventions in Brown’s house, as well as a newspaper clipping with the headline “Brown mansion destroyed.” The assumption is that Brown has a tragic backstory, perhaps losing a family member or his family fortune in an unfortunate accident. But not so, says Gale.

Related: Back To The Future: How Old Doc Brown Is In Each Movie

Speaking on the ninth episode of the Russo Bros. Pizza Film School, the YouTube show in which the Avengers: Endgame directors discuss classic blockbusters with key members of the cast and crew, Gale drops the bombshell that perhaps Doc Brown has burned down the mansion deliberately in order to fund his inventions. Speaking about how they come up with his backstory, Gale makes the claim that the newspaper clipping is meant to make you think that. You can see his full quote below.

By coming up with the character of this guy [Doc Brown] we asked what was his backstory, how is that he was the guy that invented time travel? He is far from what the cliche of the scientist, or even the mad scientist was at the time that we did it. First off, he’s kind of a rebel and a hero, because he rips off this plutonium from these terrorists. That’s pretty cool. We see all this stuff in this lab and we want to meet this guy. But there are all these other things. Some things you don’t even pick up until the second or third time you see the movie. The newspaper article that you see in that opening shot. Did Doc Brown set his house on fire to collect the insurance so that he could continue financing his experiments?

In response, Avengers: Endgame co-writer Stephen McFeely, who appeared on the show along with writing partner Christopher Markus, reacts in shock, shouting “Did he?” Gale responds by saying “maybe he did.” McFeely remains indignant, insisting that Doc Brown just has a tragic backstory and that’s why audiences like him. Gale responds that the question is asked, but never answered, though reiterates that as you see Doc Brown throughout the movie, he is prone to doing unethical things to get his way. He ends by saying that all humans are full of contradictions, including Doc Brown.

The revelation isn’t only shocking to McFeely given that most fans of the film would assume the newspaper clipping refers to an accident. However, Gale’s hint that Doc Brown isn’t as ethical as the audience might think gives him a more complex backstory, and fleshes out the character a little more. It certainly fits in with his ambitious persona in the first movie.

Burning down his family mansion wouldn’t exactly be out of character for a man who would stop at nothing to perfect time travel, including dealing with a group of terrorists in order to obtain plutonium for his time machine. Gale’s comments once again prove the depth of Back to the Future and lends more credence to the idea that it’s an almost perfect movie.

Next: Back to the Future: Why Marty Never Saw The DeLorean Before (Doc’s Secret Lab)

Daniel Gillespie has been a writer and editor for the past 11 years. His favourite filmmakers include Stanley Kubrick, Denis Villeneuve, Christopher Nolan, Wes Anderson, Edgar Wright and the Coens. Currently working out of New York City, he is a film-obsessed immigrant from Cape Town, South Africa. When he isn’t watching, writing about or thinking about films, Daniel likes to go hiking in the mountains with his wife.

Jennifer Lopez Wears the Most Sparkly Outfit Ever at the Vax Live Concert Special
Marlo Hampton Says It Was “A Lot” For Drew Sidora To Show Her Son’s Struggles On Real Housewives Of Atlanta; Praises Her For “Giving Her True Reality”
Who Is Cut Lawquane? Bad Batch’s Returning Clone Wars Character Explained
Diablo Cody Writing Comic Book Adaptation ‘Lady Killer’ With Blake Lively Attached to Star
Hurry, Shop These Exclusive Under $50 Mother’s Day Deals Before They Sell Out!