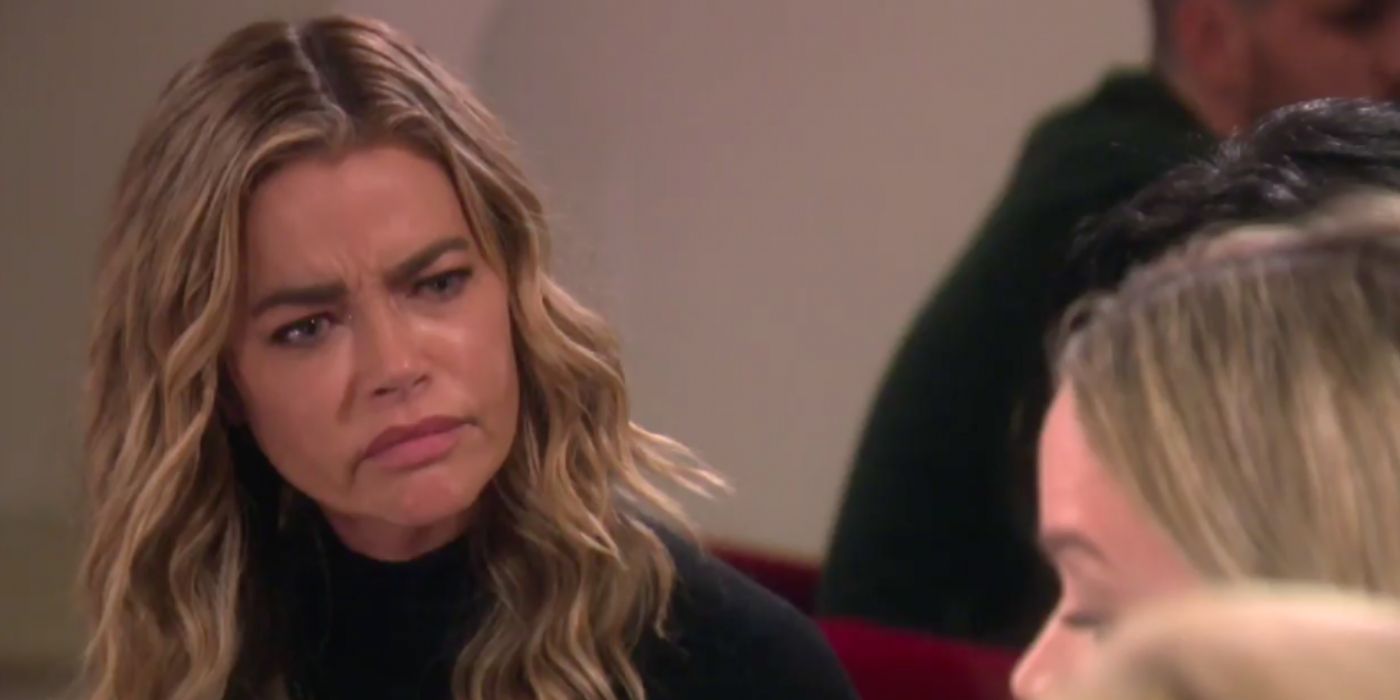 While the ladies of The Real Housewives of Beverly Hills were in Rome, Teddi Mellencamp dropped the dreaded and much-anticipated Brandi and Denise bomb. Denise Richards learned for the first time that Brandi Glanville told housewives Kyle Richards and Teddi that not only did she and Denise sleep together, but Denise also said some pretty mean things about the other housewives. A shocked and teary-eyed Denise denied all accusations, telling cameras in her confessional, “Brandi Glanville is your source?” But next week, Denise is ready to fight back by revealing some shocking allegations about Brandi.

Brandi revealed the details of her affair with Denise on last week’s episode of RHOBH. After the two women slept together, Denise ignored Brandi for months until the night of Kyle’s charity event. Brandi told the other housewives that Denise called her the night before the event, saying, “You haven’t told anyone anything right? I’m super private.” Denise also allegedly said “she would never tell Brandi’s secrets,” which Brandi took as a threat. However, if Brandi’s private affairs were revealed, she wouldn’t have as much to lose as Denise, as she is a known bisexual and not in an exclusive relationship.

A preview for next week’s episode shows Denise continuing to spiral after hearing of the affair rumors. Rather than telling her side of the story, Denise tells the girls something shocking. While sitting down for dinner with her fellow housewives, Denise says, “I will tell you, Brandi said that she’s had sex with some of the people from this group” (via People). When Kyle asks Denise if the person is sitting with them at the table, Denise says yes.  The suspects included Kyle, Teddi, Dorit Kemsley, Erika Girardi, Sutton Stracke, and Lisa Rinna. All eyes seemed to turn to Rinna, but nothing has been confirmed.

While the Brandi and Denise drama may appear to be she said/she said on the surface, Brandi does have some receipts. She recently posted texts between her and Denise that supposedly took place while making arrangements for Brandi to visit Denise in Northern California while she was filming a movie. There was even a photo shown on RHOBH of Denise and Brandi in Mendocino, CA, taken in May 2019. Denise tried her hardest to have the conversation about what happened between her and the housewives in Rome deleted from the July 29 episode of The Real Housewives of Beverly Hills episode. She even uttered the magic words, “Bravo, Bravo, Bravo.” Apparently, this phrase is  the housewives’ “safe word.” Once said, nothing after it can air. She went on to say “I’m a very married woman and I love my husband to death. If they ever want me to be on this show, they need to cut that.” Evidently her attempts to stop the inevitable didn’t work, since on last night’s RHOBH episode, what was said in Rome didn’t stay in Rome.

At least the girls got to live up the drama in style. Their lush, gorgeous rooms at the Villa Agrippina Gran Melia in Rome looked out on The Vatican, one of Italy’s most iconic sights. Tune into The Real Housewives of Beverly Hills next Wednesday to hopefully hear more about Denise’s shocking claims.

Next: Denise Richards Willing To Return to RHOBH Despite Affair Rumors

The Real Housewives of Beverly Hills airs Wednesdays at 8 pm on Bravo.

Miriam has a BA degree in Broadcast Journalism from the University of Texas at Austin. She has been an entertainment writer & host for 10+ years. She’s excited about being an Entertainment & Tech Features contributor for ScreenRant.

“Texas ChainPaw Massacre” Helps You Adopt Pets That Look Like Animals from Horror Movies!
Why James Kennedy Promises Vanderpump Rules’ Season 9 Will Be Like No Other
How Emma Stone’s Cruella Is Inspired By Glenn Close, According To The Film’s Costume Designer
Returnal’s Save File Corruption & Crashes To Be Fixed By Next Patch
Walt Disney World Cast Member Fired For TikTok Videos Has An Update, But It’s Not Good News