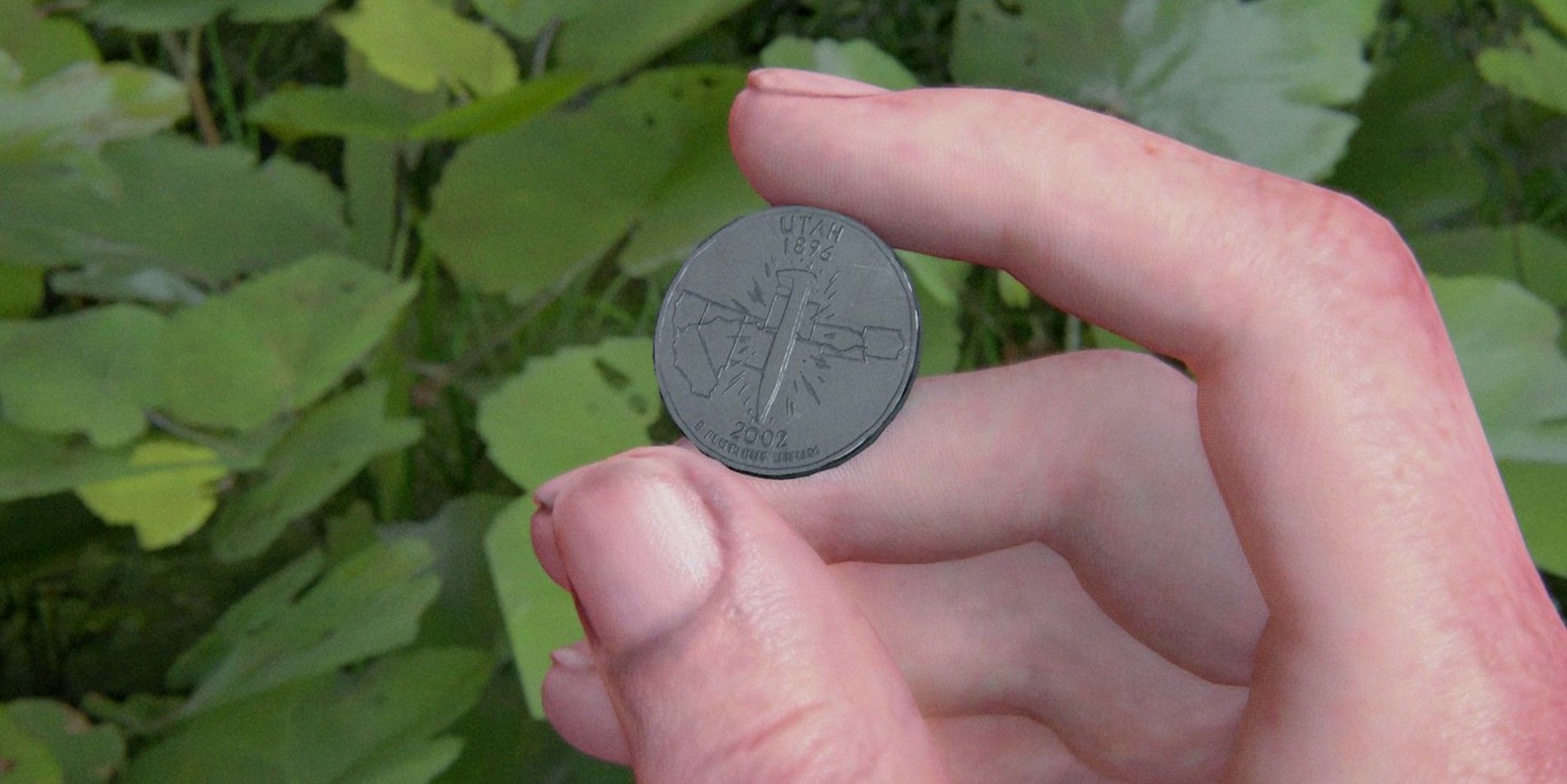 While the world of The Last of Us Part 2 is full of dangerous creatures and deadly humans, there is some light-hearted fun present in the game as well. Players can spend a considerable amount of time playing the guitar, playing with dogs, and even searching the world for random collectibles. Ellie and Abby both have their own set of collectibles to find, and they can be a good way to kill time in the game.

Related: Why Ellie Is The Worst Character In The Last Of Us 2

While Ellie spends her time looking for trading cards, Abby on the other hand seems to have a fascination with old coins. This was a hobby that the character used to do with her dad, so it seems that it has carried on over the years. Tracking down all 32 coins can be kind of tricky, so this guide is here to show players all of their locations.

The Last of Us Part 2: Day One Coin Locations

This section will show players the chapter and specific location of each coin in Day One:

Virginia- Flashback: While in the flashback scene with Abby’s father, players will find this first coin on the edge of the dumpster used to climb the building.

Alaska- Stadium: Before leaving Abby and Manny’s room the player should look on the floor next to the logs to find the Alaska coin.

Maine- Stadium: Leave Abby’s room and follow Manny and Mel down two flights of stairs. Just before the third set of stairs there will a coin on the bench to the right.

New Jersey- Stadium: Right after retrieving Alice, the player will see a large WLF mural on the wall. A coin will be in the mud directly in front of the mural.

Vermont- Stadium: Right after being given weapons, the player should inside the cabinet on their left to find another coin.

Kentucky- On Foot: Abby and her companions will flee danger inside a building at the beginning of this chapter. Just inside there will be a table with the Kentucky coin on top.

Massachusetts- On Foot: Players will enter an area full of plants that Mel says reminds her of Abby’s dad. A cash register on the far left has a coin.

Ohio- On Foot: Abby will boost Mel up and she will open a door. Through this door, there will be a ladder that can be used to progress. If the player instead turns and places the ladder next to the door they just came through they will find a hidden area with the coin.

Indiana- On Foot: Just past the warehouse there will be a locked mobile home. Players can smash the back window to find a coin inside.

California- FOB: At the beginning of this chapter players should walk straight ahead and up a small set of stairs. If they take an immediate right they will find a coin near the railing behind some soldiers.

New Mexico- FOB: After getting through the checkpoint, players will need to turn left and go towards the set of portable toilets. The New Mexico coin is on the ground here behind the crowd of people.

South Carolina- FOB: While looking for Isaac, two people will ask Abby and Manny to play a game with them. This coin is on the left side of the table they are sitting at.

North Dakota- Hostile Territory: After the player makes their way through the clothes store, they will see a car and RV parked next to each other in front of an open window. If players climb the RV and go through the window they will find the coin inside a drawer to the left.

Alabama- The Coast: Once the player has made their way through the shipping yard and have climbed the bridge, they will find a dead body to their left. Alabama’s coin is resting here.

West Virginia- The Coast: Once on the second floor of the ship, players can turn left and take out any infected in their way. They will then need to go all the way down the hallway and turn right to find the coin next to a teddy bear.

Utah- The Coast: At the top of the ladder that leads out of the ship, players who look behind the lookout area will find another coin.

Mississippi- The Coast: Before entering the aquarium, players will find the last coin inside the whale fountain outside.

The Last of Us Part 2: Day Two Coin Locations

This section will show players the chapter and specific locations of all Day Two coins:

Nevada- The Shortcut: At the end of the first set of rapids, there will be a barbershop on the right-hand side. The Nevada coin is inside on the counter.

Colorado- The Shortcut: Once the coffee shop has been cleared out, players will cross the street and enter a building called Interbay. Players will need to go to the other side of this building to cross the river and climb through a hole in the blue wall ahead. From here there will be a broken window to climb through on the right that leads to the Colorado coin.

Illinois- The Descent: After falling into the pool, players will find another coin in the deep end towards the drain.

Oregon- The Descent: This coin can be found right after the player gets Lev a mask and descends down the fire hose. They will then need to shimmy across the ledge that goes past the vending machine. There will then be a ledge that the player has to drop down. Players will need to proceed further until they get the chance to drop down again. There will then be a beam ahead that leads to a Shambler. They should take it down quickly and then walk across the beam on the right before dropping down to the next level. Behind them will be room 1107, which holds the Oregon coin.

Wisconsin- The Descent: There will be a section in the building where the player is forced to escape through an elevator door and then drop down a level. There is a vending machine here that can be smashed to get another coin.

Rhode Island- The Descent: Right after Abby and Lev take their masks off, the player can slide down some rubble that leads to a bar. There is another coin behind the bar.

Missouri- The Descent: Once players have made it to the hospital they look at the Specialty Care Center on their right. The coin will be on the ground at the end of the hall.

Washington- Ground Zero: Players should follow Nora down the hall until they find a small cafe on their left. The coin is behind the counter.

Hawaii- Ground Zero: Right after the boss fight, players can find a group of supplements on their left. Right next to that will be the final coin of Day Two.

The Last of Us Part 2: Day Three Coin Locations

This section shows players the chapter and specific locations of all Day Three coins:

Kansas- The Marina: Right at the beginning of this chapter, the player should turn around a go up the stairs behind them. There will be a coin next to the railing at the top.

Louisiana- The Marina: After the players go down the stairs to the station, players should stick to the right side and go down next to the platform rather than going up the stairs. This coin will be next to the train.

Idaho- The Island: As soon as the player makes it to the island they will climb a ladder ahead. There will be a truck here that can be opened to find a coin.

North Carolina- The Island: As the player progresses they will come across a bank and a waterfall. Right before the edge of this bank there will be a destroyed car with a coin on the ground nearby.

Montana- The Island: Once the player reaches the Logging Camp they will need to take out several Seraphites. After taking out the enemies, players will need to climb the ladder near the lumber mill. There is a box at the end of the walkway that holds the coin.

Arkansas- The Escape: Once Abby rejoins Lev and Yara they will travel through some old houses. They will eventually go through a flooded basement. Right after this basement section players should look to their left to find a cart covered by a blue sheet. The final coin of the game will be found behind this cart.

Once the Arkansas coin has been found, that will be the last of the collectibles. For their trouble, players will be awarded the Numismatist trophy, but the coins serve no other purpose in the game.

Next: The Last Of Us Part 2’s Metacritic User Score Is Actually Going Up

The Last of Us Part 2 can be played on PlayStation 4.

Cody Peterson is an avid reader and writer. Graduated from Midwestern State University with a BA in English where he worked as an editor for the University literary journal. Currently a freelancer for Screenrant, where he writes about video games. When he isn’t writing he usually spends his time playing video games or editing the podcast he runs with his best friend.