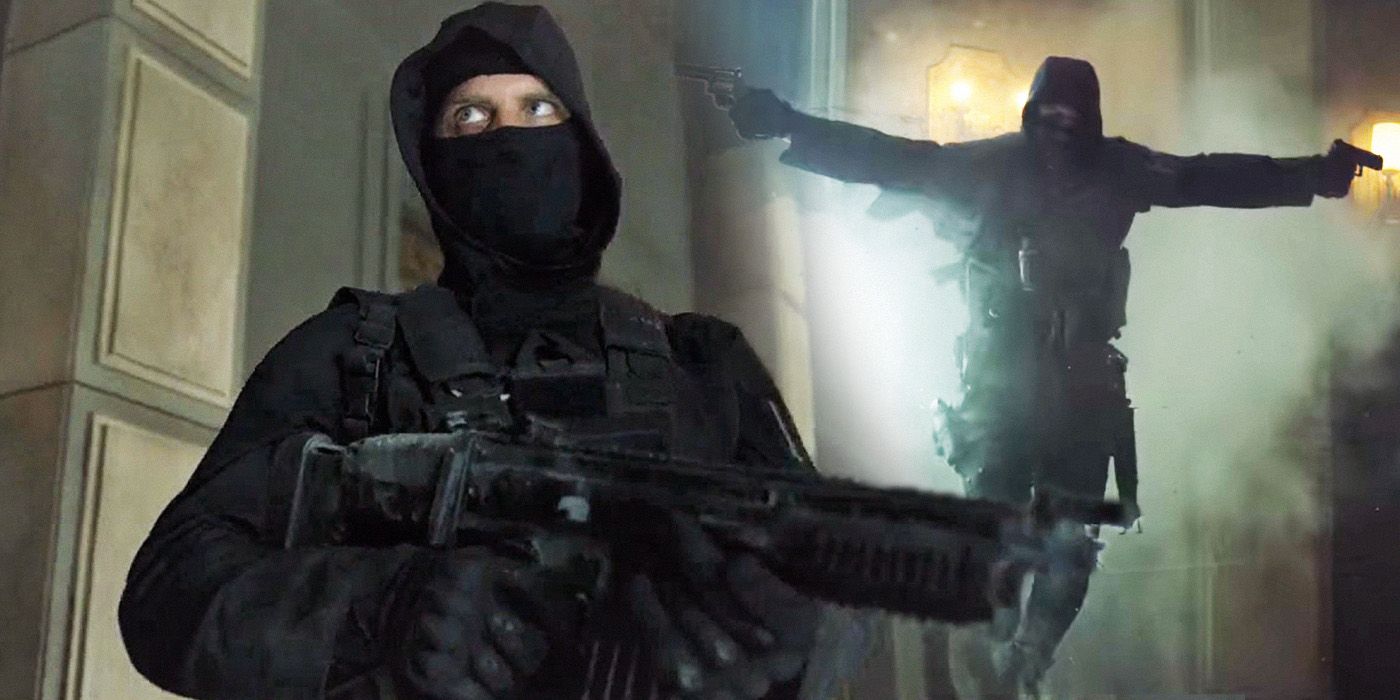 Money Heist is a show filled with outlandish plans and wild scenarios, but season 4’s shoutout with an apparently invincible Gandía (José Manuel Poga) was the series’ most ridiculous moment yet. Gandía is the chief of security at the Bank of Spain, which the gang took control of at the start of season 3. From the start he was set up as a dangerous nemesis – so much so that Berlin (Pedro Alonso) argued they should kill him right away, before he had a chance to make trouble. The Professor refused to allow this, and Gandía has been causing problems ever since the heist began.

First, Gandía refused to leave the bank when ordered to, and commanded the rest of the security team to remain inside as well. Later, thanks to a tip from Palermo (Rodrigo De la Serna), Gandía slipped out of his handcuffs and began waging a guerrilla war against the gang. Money Heist season 4 was effectively Die Hard told from the perspective of the hostage-takers, with an insane and unstoppable one-man army dismantling their defences from the inside.

Related: Money Heist: Why Denver Has Such An Annoying Laugh

Much as Money Heist fans may hate him, it’s hard to deny that Gandía is an effective villain. But one scene in particular elevated Gandía’s plot armor to an absurd degree. In episode 6, “TKO,” Gandía is trapped in a hallway with almost the entire gang firing machine guns at him from both sides. Yet despite the gunfight going on for more than a minute, hundreds of bullets being fired and Gandía having almost zero cover to hide behind, he escapes from the shootout not only alive, but almost completely unscathed.

While the shootout scene succeeds at making Gandía almost godlike as a character, it comes at the expense of undermining the gang – not to mention stretching the audience’s suspension of disbelief to breaking point. With so many bullets being fired at Gandía, the characters’ inability to hit him can’t be explained merely by bad aim or amateurish shooting; if anything, it would have required pinpoint marksmanship to fire that many bullets and not kill him.

While some of Gandía’s invincibility could be explained by the fact that he’s wearing body armor, a bit of Kevlar can’t really account for him surviving being shot at by several different people simultaneously, especially given the fact that his head and limbs are mostly unprotected. The scene is particularly devastating because, after escaping the shootout, Gandía captured, tormented, and finally murdered fan-favorite character Nairobi (Alba Flores).

At the end of season 4, Gandía has finally been captured again – his plot armor not quite strong enough to withstand being hit with a grenade. He’s not dead yet, however, and given his background as a black ops assassin it wouldn’t be surprising if he managed to break free and wreak more havoc on the gang in Money Heist season 5. On the bright side, that might give them an excuse to get revenge for Nairobi’s death.

Hannah has been with Screen Rant since the heady days of 2013, starting out as a humble news writer and eventually clawing her way up the ladder through a series of Machiavellian schemes and betrayals. She’s now a features writer and editor, covering the hottest topics in the world of nerddom from her home base in Oxford, UK.

Hannah enjoys weird horror movies, weirder sci-fi movies, and also the movie adaptation of Need for Speed – the greatest video game movie of all time. She has lived and studied in New York and Toronto, but ultimately returned home so that she could get a decent cup of tea. Her hobbies include drawing, video games, long walks in the countryside, and wasting far too much time on Twitter.

Speaking of which, you can follow Hannah online at @HSW3K

Lana Del Rey Reveals New Poetry Book and Spoken Word Album Release Dates
Real Housewives Alum Bethenny Frankel Is Launching A Podcast
Film Review: Trilogy of Terror (1975)
Christopher Meloni on Return to Law & Order and “Inherent Drama” Between Benson and Stabler
Rachel Lindsay Reveals the Reason She Was Once “So Against” Dating Outside Of Her Race