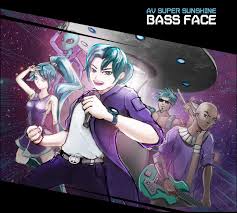 Wisconsin based AV Super Sunshine, working in tandem with talented producer/musician Michael Bradford, Earlier efforts from Sunshine such as “Candyland”, in its various mixes, established the talented singer, musician, and songwriter as one of the finest stylists in popular music today. His latest single “Crazy Love” follows the template of the aforementioned single in some respects, it’s included in two mixes, and it boasts the same signature synthesis of modern musical values and traditional rock influences in one package. He achieves something unique once again – a musically substantive track capable of entertaining its intended audience. Bradford’s effect on the final product is important as well; the producer has an unique creative relationship with Sunshine that comes through with this performance.

He applies light phasing effects to the song’s opening guitar and there’s a steady pulse of percussion punctuating the introduction. “Crazy Love” incorporates a smattering of harmony vocals along the way that adds a memorable touch to the arrangement, but the defining vocal contribution to the first version of the track comes, without question, from Sunshine. He has a forceful but never strident vocal manner with subtle emotional edge that cuts into listeners.

The vocal melody and his phrasing accentuate the strength of the lyrics. There’s no attempt here to remake the songwriting wheel and the subject matter is canonical for popular song, but the writing illustrates the same consistent well-aimed skill characterizing his earlier efforts. It is a recording running close to the four minute mark, but the construction and verve of the performance keeps you engaged throughout.

It is no surprise the song’s dance mix is much more electronica reliant than its rock counterpart. There’s no lack of synthesizers in the second iteration of this cut but, despite their abundance, Sunshine avoids any sense of overkill. It’s certain the relentless bass pulse in the heart of the mix will set speakers rattling, but Sunshine shows the same taste with this element of the sonic presentation and the bass never risks a bludgeoning effect on listeners.

The singing has a much more theatrical tilt in the dance mix, but it’s never heavy handed. The pace of the music and vocal alike are brisk but never hurried. AV Super Sunshine proves the song’s core strengthens by delivering two different yet convincing versions of the same track. “Crazy Love” matches the same high standards customary for AV Super Sunshine’s music and shows no signs of his creative drive slowing down.

It begins his 2020 on a rousing note. He’s demonstrated prodigious musical and songwriting imagination since first emerging on the scene. His resolute refusal to pander to the lowest common denominator and record paint by numbers rock distinguishes him from many of his peers. “Crazy Love” has professional polish and additional punch thanks to Michael Bradford’s contributions to the release and there’s no question these two talents are complementary in all ways. We’re less than a month into the new year and AV Super Sunshine’s “Crazy Love” is an early contender for single of the year.