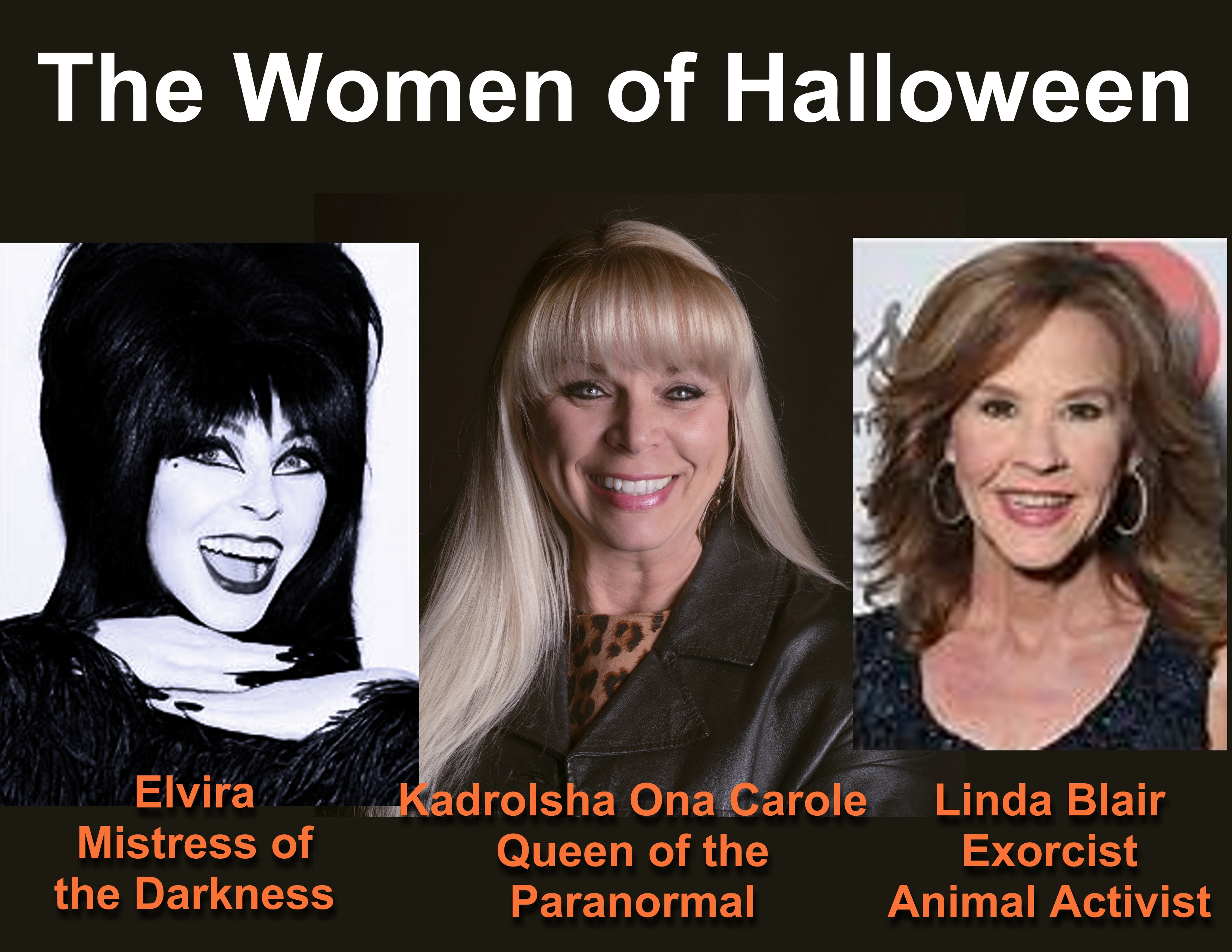 Halloween is a fascinating time of year. Ghosts, goblins, scary costumes and movies. Lots of trick or treating and then there is the candy. In the spirit of Halloween, there are conventions with pop culture icons waiting greets you. My assignment was to find the top three women Halloween Pop Culture Icons. I got to work researching. The answer may surprise you.

What I found were three strong women with 3 Iconic legacies. They cover all the bases for Halloween Pop Culture.

The list of women to choose from was long and varied.  I put them in 3 categories from a Halloween Characters to Movie Actresses, to “IT” Girls (the ones to look for now). I chose one from each category respectfully.

Elvira, rang out strong as the perfect Halloween Character. Her website states it best. “When you hear the name Elvira only one person comes to mind: Horror icon and quintessential symbol of all things spooky, the one and only Mistress of the Dark. Elvira’s reign as ‘Queen of Halloween’ has spanned more than three decades and includes an IMAX movie, music CDs, books and more than a thousand licensed products. Back in 1981, who could have imagined the hostess of a local Horror movie show would become a household name?  Elvira was the first horror host ever to be syndicated nationally and has emerged as one of today’s most original and outrageous pop culture icons”. Visit Elvira’s website and read about her legendary career. www.Elvira.com

Kadrolsha Ona Carole, is the “IT” Girl. She is the one and only “Queen of the Paranormal ®”. Her rise to pop culture icon fame is taking the world by storm. Kadrolsha, KO, as she is fondly known is  a year-round pop culture icon. Her fans call her the real deal. She has decades of experience in the realm of the paranormal of all genres. Like Elvira and Linda Blair, KO, has an extensive IMDB history with 47 Awards, 18 of which are IMDB qualified, books, DVDs, and products. Kadrolsha travels the globe giving lectures, making appearances, doing reading & positive energy healings and sharing her vast paranormal knowledge. Kadrolsha Ona Carole is part of Warner Brothers motion picture history with her contribution to the 40th Anniversary of The Exorcist DVD on Blue Ray. KO, made comic book history by becoming the first person to be a comic book Superhero doing what she does in real life between the pages of a comic book. She hosts the globally broadcast Paranormal 13 News on the Galaxy Global Television Network. KO’s skyrocketing, ever-growing career is hard to keep up with. She is the total paranormal package and well-deserving of the “IT” Girl Status. KO is fast becoming what legends are made of. Her achievements are vast. You need to visit her website and ready her lengthy list of accomplishments. www.queenoftheparanormal.com

Linda Blair, fits the mold of the sequential horror movie actress. Linda played the possessed child, Regan, in the film The Exorcist (1973), for which she was nominated for an Academy Award and won a Golden Globe. She reprised her role in Exorcist II: The Heretic (1977), for which she was nominated for a Saturn Award. Throughout the 1990s, Blair appeared in various independent films and B movies, as well as several television credits: From 2001 to 2003, she was the host of the Fox Family reality series Scariest Places on Earth, and in 2006 had a guest role on the series Supernatural. She also appeared as herself on the Animal Planet series Pit Boss from 2010 to 2012. In addition to her acting credits, Blair has publicly supported various charitable causes, specifically animal rights. In 2004, she founded the Linda Blair WorldHeart Foundation, which serves to rehabilitate and adopt rescue animals. Wiki. Without a doubt she is the leading movie actress of Halloween Pop Culture icons. Visit her website for all her up to date information and her WorldHeart Foundation. WWW.reallindablair.com