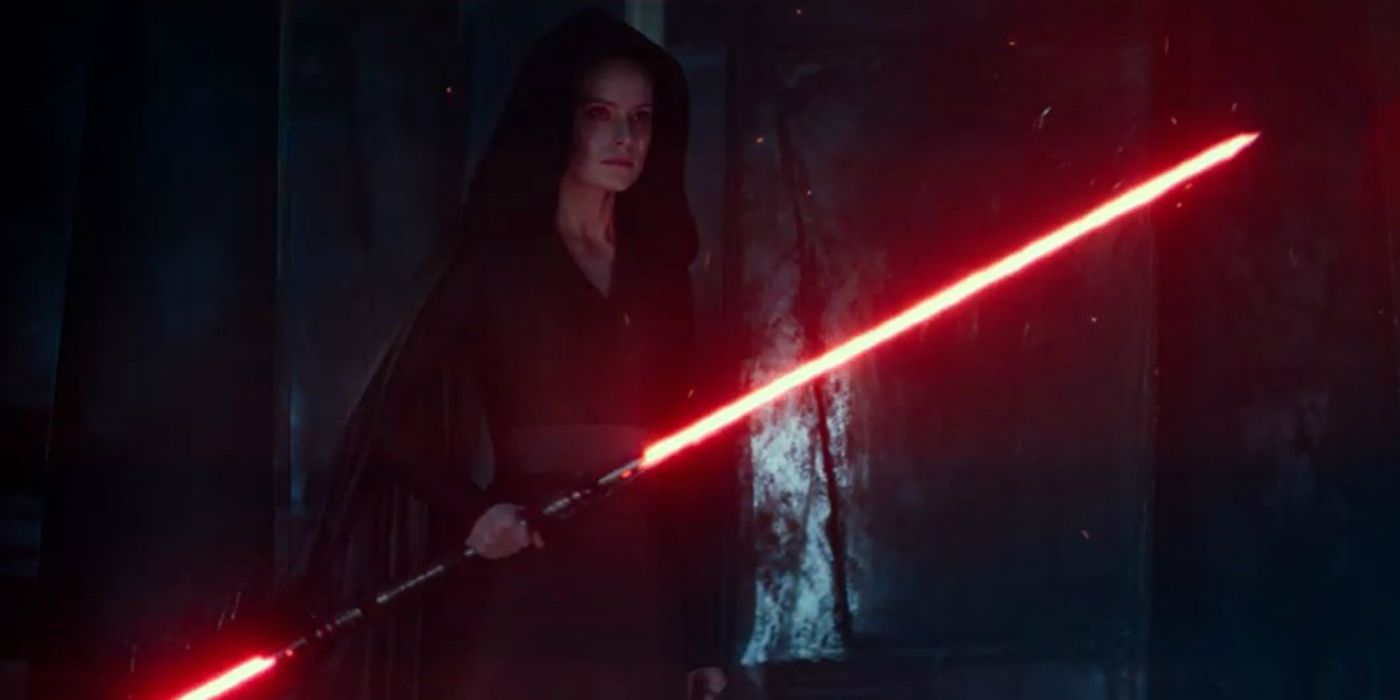 The latest trailer for Star Wars: The Rise of Skywalker has barely been out a week, but Rey’s double-sided red lightsaber has already been given an upgrade. The new Episode IX footage was released as part of the D23 event – expanding upon the previous Star Wars Celebration teaser with fresh shots of nostalgia and stunning action. One of the biggest gasp-worthy moments came courtesy of Rey (Daisy Ridley) looking particularly Sith-esque and wielding a red, double-bladed lightsaber.

The story is predictably being kept under wraps. Kevin Smith, however, has been extremely enthusiastic regarding what he saw when he visited the set and has promised that it’ll melt fans’ minds. Directed by J.J. Abrams, who also helmed The Force Awakens, the new installment will see the aforementioned Ridley joined by John Boyega’s Finn, Oscar Isaac’s Poe Dameron, and franchise newcomer Keri Russell as Zorii Bliss. Seeking to end the threat still posed by Kylo Ren (Adam Driver) and his forces – as well as a seemingly returned Emperor Palpatine – the remaining rebels will even travel to the ruins of a Death Star. Star Wars stalwarts Mark Hamill and Carrie Fisher will also return – with the latter reworked into the plot using previously unseen footage following her passing. The supposed turn of Rey to The Dark Side, however, has continued to dominate much of the speculation and discussion.

The self-confessed creator of “overproduced memes” known as ActionMovieKid, however, decided to lean more into having fun with the turn. Editing the moment Rey is revealed in full Sith attire and sporting a Palpatine-esque gaunt look, the lightsaber appears at first to be the same ominous weapon from the trailer. At the moment she collapses it down, though, is when it’s revealed that it’s not only a double-bladed lightsaber but also boasts such features as a corkscrew, tweezers, and more. Check out the brief, hilarious edit below:

The D23 trailer teased Rey training with her lightsaber in a forest – throwing it at a training remote, leading it to cut through trees before ultimately returning to her hand. As such, each of the other tools would definitely come in handy for a budding Jedi Master. Especially for needs beyond defeating your enemies, like opening wine and an extreme sports version of toenail clipping. Although, in regards to enemies, it would be particularly beneficial too. It would certainly give her an added advantage over Kylo Ren and his personal Sith Troopers. And should Rey legitimately go to the Dark Side, the potential uses for such implements would no doubt be equally dark.

There’s a section of fans that still root for Kylo Ren to achieve redemption. While it’s certainly possible, especially given Abrams’ penchant for echoing the past, it would appear that Kylo is reverting to his Force Awakens self. Equally, the trailer and poster both prominently feature Kylo and Rey locked in an intense battle. Given that, it’s safe to say that they’ll be foes for at least a good chunk of the movie. How things ultimately end between them, however, remains to be seen. Unfortunately, the same probably can’t be said for a Swiss Army Lightsaber in the actual movies. Still, it’s a fun piece of imagery that’ll surely amuse fans in the months leading up to Star Wars: The Rise of Skywalker‘s release in theaters.

More: Every Star Wars 9 Reveal From the D23 Panel

WarnerMedia Discovery Announces Music Supervisor Program for “Marginalized Voices”
Kandi Burruss Says There’s Always Be Room For Porsha Williams To Come Back To Real Housewives Of Atlanta
It’s Still Not Over: Surprising Secrets About The Notebook Revealed
9 Albums Out This Week You Should Listen to Now
Maya Vander confirms she won’t return to ‘Selling Sunset’