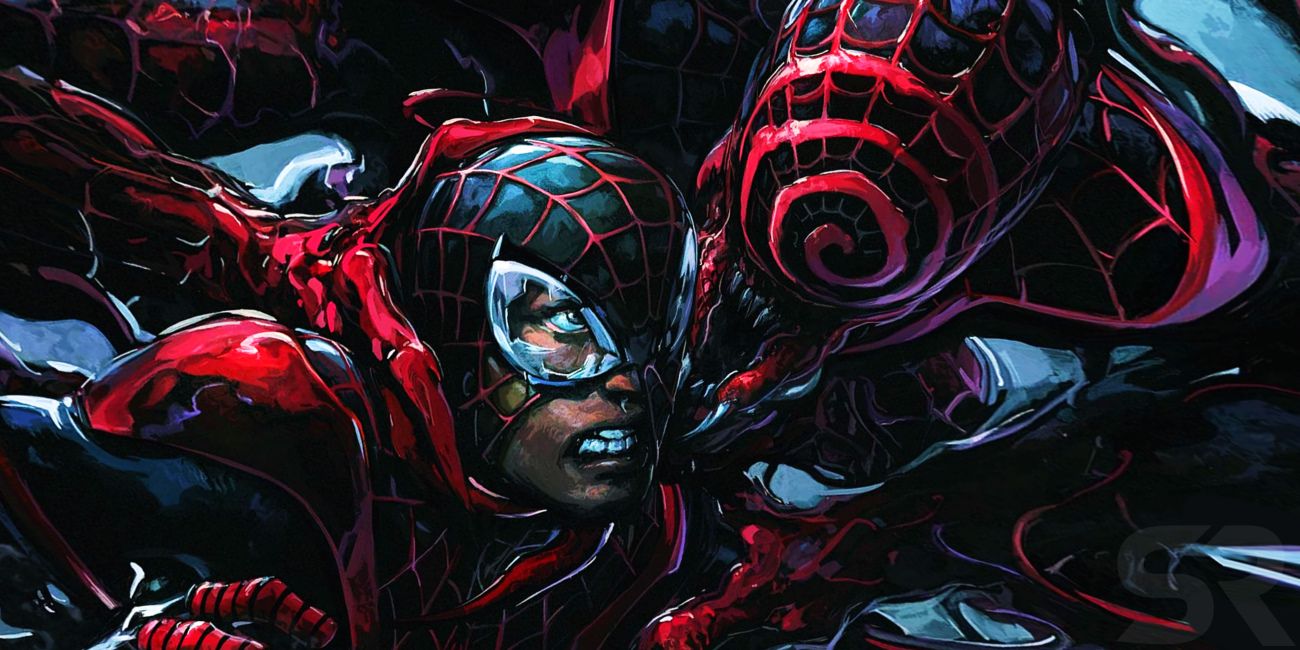 Absolute Carnage has already proven to be a horrific event, showing Carnage ripping the spines out of those who have ever worn a symbiote. Luckily Venom has managed to save at least one former symbiote host from this gruesome fate… but it comes at the expense of Spider-Man himself, Miles Morales.

Absolute Carnage: Miles Morales #1 lets readers see this nightmare version of Carnage from Miles Morales’s point of view, finally learning firsthand just how awful it can be to be left alone against Cletus Kasady. Defending a group of innocent civilians is one thing, but during a fight with the supervillain Scorpion a.k.a. Mac Gargan, the two are forced to set their differences aside as a horde of Carnage’s infected minions attack. Carnage is after Scorpion since he wore the symbiote as a prior version of Venom, and now holds a ‘codex’ in his spine, connecting him to the symbiote hive mind. Carnage is trying to collect them all to awaken the Symbiote God… but recruiting a Spider-Man to his army is a fantastic consolation prize.

Every Spider-Man fan already knows Miles is dedicated to protecting everyone he can, even villains like Scorpion. So when Eddie Brock arrives in pursuit of Cletus just in time to save Scorpion–before being swatted aside–only Miles can save the day. He may be too late to save Scorpion’s spine (where the codex is located) but he still delivers one hell of a punch to Carnage, amplified by his own Venom Strike ability.

Scorpion is still gravely injured from Cletus’s attack, but Venom is there to try to drag him away from the fight (no easy task, even for Eddie). From the way the scene plays out in Absolute Carnage: Miles Morales, fans might assume Venom simply leaves Miles alone to face Carnage and his horde. Thankfully, Absolute Carnage #2 helps to shed more light on the events, confirming Venom hasn’t left Miles for dead. The story retells the fight from Eddie’s perspective, revealing his arrival to the fight far earlier. It turns out Venom is the only reason Scorpion stays to help, instead of running off and leaving Miles behind. Tossing Mac back into the fight, Venom does set out to save Miles Morales first.

But as Scorpion is overrun as quickly as anyone not blessed with a symbiote is doomed to be, Eddie steps in (since he’s responsible for Mac’s injuries, indirectly). It’s here where the stories sync up, as Eddie attempts to carry Scorpion away from the battle, believing Miles can handle his own against Cletus. The young Spider-Man takes the burden of stopping Carnage alone in stride, but hurt and alone, Miles is overrun by the symbiote horde. Leaving it to Mac, partially paralyzed thanks to Carnage’s crude spinal surgery, to ask Venom why the kid isn’t following…

Without Venom to help, Carnage is able to sink his tendrils into Miles. A less fatal attack than Scorpion would have suffered… but a gruesome fate all the same. The final page shows Carnage turn Miles into his new puppet–his “perfect little monster.” The twist may be Venom’s biggest mistake in the event thus far, having saved the villain without ensuring the safety of Miles, first. But Eddie will be cursed to remember the image of the young hero (whom Eddie only recently met face to face) with Carnage’s tendrils claiming him as he pleads for Eddie’s help.

It’s too late to save Carnage’s new recruit, who is sure to be used by Cletus Kasady to torment both Venom and Peter Parker. And in its second issue, Marvel’s Absolute Carnage event has raised the stakes significantly. Carnage may not have a reason to kill Miles just yet, but that won’t make this any easier for fans to swallow.

Absolute Carnage: Miles Morales #1 is available now at your local comic book shop, or direct from Marvel Comics. To find out why Eddie Brock DIDN’T just let a teenage be turned evil, pick up Absolute Carnage #2, as well.

MORE: Captain Marvel is Turning EVIL To Kill The Avengers

Noella Bergener: ‘RHOC’ cast was ‘jealous’ of my ‘agony’ amid divorce
Selena Gomez Admits She Doesn’t “Trust a Lot of People”
Cheryl Burke Shares She Had an Abortion at 18
“Uzumaki”: Adult Swim’s Junji Ito Adaptation Has Been Delayed to “Recreate Ito’s Masterpiece Properly”
Nordstrom Rack’s End of Season Sale: Clearance Shorts, Dresses, Sandals & More Are an Extra 40% Off