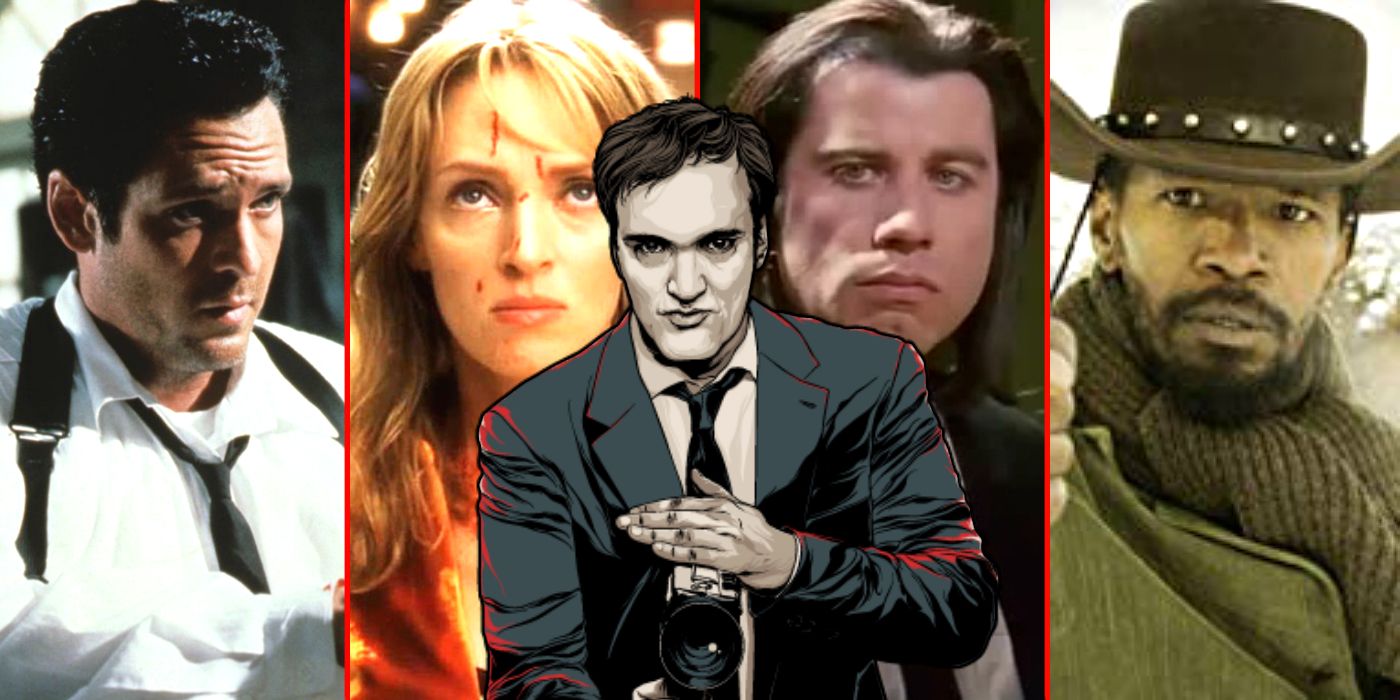 Shared universes are all the rage in cinema right now, with every studio trying to emulate the box office-breaking success of Marvel Studio’s Marvel Cinematic Universe. High-profile efforts include everything from Warner Bros.’ own superhero-oriented effort, the DC Extended Universe, to failed attempts like Universal Picture’s monster movie-themed Dark Universe. But there’s one shared universe that has been ticking along just fine in the background far longer than any of these: the films of Quentin Tarantino.

It may come as something of a surprise to casual viewers, but almost every entry in Tarantino’s filmography is connected, from 1992’s Reservoir Dogs right on through to this year’s Once Upon A Time In Hollywood. Sure, this interwoven tapestry may not rival the MCU in scope — although not even Marvel can lay claim to a similar “universe within a universe” conceit — but it’s pretty dang awesome all the same. To help bring you up to speed, here’s a round-up of our 10 favorite Tarantino movie connections.

Click the button below to start this article in quick view

Here’s a connection most cinephiles will already be aware of: Reservoir Dogs’ sadistic diamond thief Vic Vega and Pulp Fiction’s ambivalent hitman Vincent Vega are related. Tarantino himself confirmed as much years ago, when he expressed interested in making a “Vega Brothers” spin-off, titled Double V Vega.

Since both Vic and Vince don’t survive their respective movies, fans have long speculated that Double V Vega will be a prequel, but it’s starting to look like that speculation has been in vain. After all, a film centered around the Vega boys has yet to materialize, and — given the ages of stars Michael Madsen and John Travolta — it seems unlikely one ever will.

Several fictional brands appear prominently in Tarantino’s films. For instance, if you see a character smoking in a scene, chances are they’re puffing on a Red Apple cigarette. The distinctive Red Apple packaging crops up in several of the acclaimed auteur’s outings, including Pulp Fiction, Kill Bill and Django Unchained. Red Apple cigarettes even serve as the basis for Once Upon A Time In Hollywood’s post-credits scene.

Another recurring made-up brand in Tarantino’s shared universe is Big Kahuna Burger. First alluded to in Reservoir Dogs — Mr. Blonde’s milkshake sports the fast food chain’s distinguishing red diagonal stripes — Big Kahuna Burger products play a pivotal role in Pulp Fiction’s iconic “Ezekiel 25:17” scene. A Big Kahuna Burger bag also pops up in From Dusk Till Dawn, while a billboard promoting the chain can be seen in Once Upon A Time In Hollywood.

Captain Koons — played to idiosyncratic perfection by Christopher Walken — only appears in a single scene in Pulp Fiction, but it also happens to be one of the movie’s most memorable moments. In it, the United States Air Force veteran recounts in painstaking detail the particulars of his captivity in a Vietnamese POW camp to young Butch Coolidge.

His questionable approach to interacting with children notwithstanding, it’s clear that Captain Coons is an upstanding member of the community. This is more than can be said for at least one of his ancestors, The Hateful Eight’s “Crazy” Craig Koons — a Wild West outlaw and member of the Smitty Bacall Gang.

One of the funniest moments in Inglourious Basterds sees several members of the film’s titular Nazi-hunting crew impersonating Italian filmmakers in less-than-convincing fashion. In true Tarantino style, Donny “The Bear Jew” Donowitz assumes the identity of real-life director Antonio Margheriti, who produced a slew of Spaghetti Western, horror, spy and sci-fi pictures during his 52-year career.

So it’s only fitting when Once Upon A Time In Hollywood protagonist Rick Dalton spends six months shooting movies in Italy that Margheriti is credited with helming one of them. Not only is this a fun call-back to Basterds, but it totally fits, considering the Italian director’s actual body of work.

Quentin Tarantino is famously selective when it comes to keeping count of the features that comprise his filmography. Indeed, despite the actual number of movies he’s had a direct hand in making, which amount to 14, the figure offered by the director is a more modest nine.

At least part of this discrepancy can be attributed to Tarantino disowning Natural Born Killers, which was heavily rewritten by its director Oliver Stone, writer David Veloz and producer Richard Rutowski.

Yet despite being the black sheep of Tarantino’s shared universe, Natural Born Killers remains inexorably part of it. How? Via Detective Jack Scagnetti, who Tarantino originally intended to be the brother of Seymour Scagnetti, Mr. Blonde’s unseen parole officer in Reservoir Dogs.

5 The Movies Within Tarantino’s Movies

Full disclosure: This entry isn’t based on anything seen onscreen in any of Tarantino’s films. Instead, it’s based off comments the filmmaker once made in an interview, where he designates some of his flicks as being part of a so-called “movie universe”.

What does this mean? Basically, Tarantino’s fictional world has a Russian doll-like structure: There’s a layer of movies nested within another layer, with the outer layer being more “real” than the inner. In practical terms, this means that Tarantino’s more outlandish efforts like Kill Bill represent the movies that characters in more realistic outings like Once Upon A Time In Hollywood go to see!

Death Proof  — Tarantino’s half of the experimental double feature Grindhouse — introduces audiences to Mike McKay, a murderous stuntman portrayed by Kurt Russell. Fast forward more than a decade, and Once Upon A Time In Hollywood sees Russell cameo as another stunt performer named Randy. Is it possible that these two guys are related? We think it’s highly likely.

Sure, the main thing connecting them is their matching profession and Russell’s involvement, but that’s more than enough to make them relatives in Tarantino’s shared universe. For our money, Stuntman Randy is the father of Stuntman Mike and his brother, Bob — as ol’ Randy’s a bit too long in the tooth to be anyone else.

In case it hasn’t became readily apparent by now, Tarantino’s shared universe is overrun with biologically-related characters. For further proof (as if more was needed), look no further than Inglourious Basterds’ Archie Hicox and his great-great-grandfather, The Hateful Eight’s “English” Pete Hicox.

It’s interesting to note that British marine Archie stands out as one of the few unequivocally heroic figures in Tarantino’s canon, whereas “English” Pete is as unsavory a character as any dreamed up by the director. Yet despite being separated by their vastly different moral codes, the pair do have at least one thing in common: both men ultimately come off second best once the bullets start flying.

In Reservoir Dogs, we learn that smooth operator Mr. White has an associate named Alabama, who he describes as “a good little thief.” At the time, viewers dismissed this as a throwaway line, but it turned out Tarantino had bigger plans for Alabama, as she subsequently serves as the female lead in True Romance (penned by Tarantino but helmed by Tony Scott).

When the Bride is buried alive in Kill Bill: Volume 2, the grave she’s dumped in bears the headstone of Paula Schultz, who passed away in 1898. Right now, you’re probably thinking “so what?” — unless you’ve recently watched Django Unchained. If you have, Paula’s surname will sound very familiar, as it’s the same as that of Django’s friend and mentor, bounty hunter Dr. King Schultz.

So, are these two related? Well, the general fan theory is that Paula was King’s wife — although Tarantino has never officially confirmed this (to our knowledge, at least). Even so, King’s demise in Django — set in 1858, 40 years before Paula’s death — matches Kill Bill’s description of Paula’s gravesite as “lonely”, further bolstering the strength of this theory.

NEXT: All Of Quentin Tarantino’s Opening Scenes, Ranked

Tags:
quentin tarantino,
once upon a time in hollywood