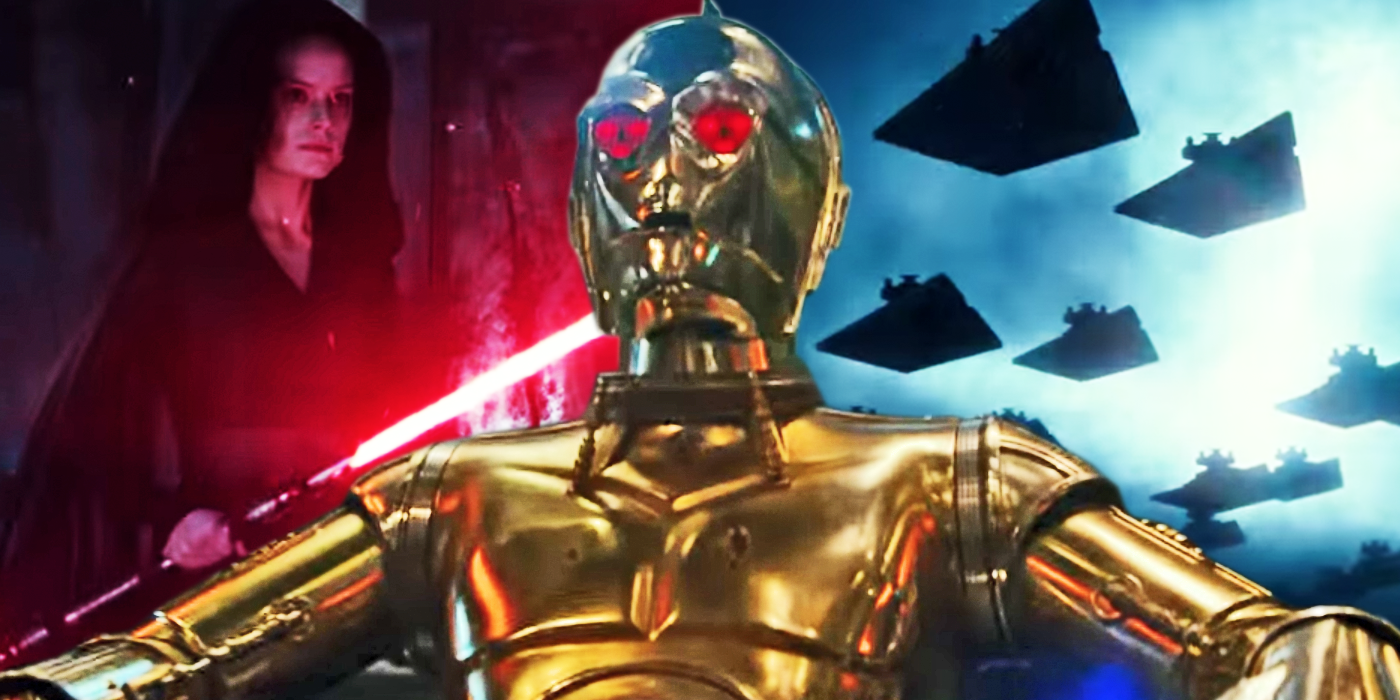 Star Wars: The Rise of Skywalker‘s new trailer reveals a lot of surprising details about the plot, as well as containing a few Easter eggs. Released at D23 Expo 2019, the footage is described as a “sizzle reel” but may as well be the film’s second trailer.

The first teaser for Star Wars 9 dropped in April at Star Wars Celebration, showing all the returning characters, a few new ones, and confirming the return of Emperor Palpatine. It had been expected that the D23 footage would be a behind-the-scenes reel as it was for Star Wars: The Force Awakens and The Last Jedi, but instead it contained what appears to be finished footage. Of course, irector J.J. Abrams is well-known for his Mystery Box approach to marketing, with trailers always tending to raise a lot more questions than answers – and that certainly the case with the Star Wars 9 D23 trailer.

Related: Every Star Wars 9 Reveal From the D23 Panel

The new footage is full of moments that have no context at all. Why does Threepio have red eyes? Why are Rey and Kylo Ren dueling on the wreckage of the Death Star on Endor? What’s going on with that dark side Rey? Even the audio cues are mysterious. We’ll answer all these questions (as best we can) and more in our Star Wars: The Rise of Skywalker D23 trailer breakdown.

Lucasfilm is recycling old, unused footage in order to bring the late Carrie Fisher back as Leia Organa in Star Wars 9, and The Rise of Skywalker‘s D23 trailer includes one impressive shot of her stood on a jungle planet, likely saying goodbye to Rey (the pair were seen hugging in the same location in the teaser).

This image is a familiar one, originally seen as part of Vanity Fair‘s Star Wars 9 cover story back in May, and appears to have been taken from a scene towards the end of Star Wars: The Force Awakens. Lucasfilm has added some digital touchups to make Leia look a little older, such as graying her hair along the sides and weathering her skin.

One of the most shocking moments in the Star Wars: The Rise of Skywalker D23 trailer for shows C-3P0 with red eyes. No context is provided for this shot, and it’s hard to say exactly what’s going on here; it certainly gives Threepio a rather sinister feel.

In the old Expanded Universe, a droid with red eyes had typically been hacked into, but it’s unclear whether that idea still applies in new Star Wars canon. It could perhaps mean something a little more benign, such as Threepio having been given enhanced processing power for some reason. A potential poster showed Threepio with Chewie’s bowcaster, so it’s possible this is the lead up to an action sequence.

The Star Wars 9 D23 trailer shows a Death Star-type blast shooting an unknown planet. The novelization of Star Wars: The Last Jedi subtly hinted that the First Order had built more superweapons before revealing their existence to the galaxy, with Starkiller Base simply their biggest and most destructive. It’s interesting to note that, while the trailer reveals a superweapon equivalent to the Death Star, it doesn’t show the mobile battle station itself. There have been rumors that the First Order has installed Death Star superlasers into a new type of Star Destroyer (as they did the battering ram in The Last Jedi), and it could be that’s what’s shown here

5. Rey and Kylo Fight on the Wreckage of the Death Star

As revealed in the Star Wars 9 teaser, the film will feature the wreckage of the second Death Star, likely fallen onto either the Forest Moon of Endor (possibly leading to a distinctly less green look). The Rise of Skywalker D23 trailer goes a step further and shows Rey and Kylo Ren fighting on a massive piece of the exterior as waves crash around them. Given the high intensity, this probably comes later in the film, making it a hint of not only the final fight in Star Wars 9, but the last lightsaber duel in the main Star Wars Saga. It also suggests that, whatever happens to the two characters, they will still be on opposing sides come the end.

Although Palpatine is confirmed to appear in Star Wars 9, the trailers have avoided giving a glimpse of the Emperor. So far, Palpatine has only appeared on a Star Wars 9 poster released at D23, which repuposed a Hot Toys model rather than using anything from the film. That’s led to increasing speculation that something has changed about the Emperor’s appearance, something that Lucasfilm is keen to avoid revealing at this stage.

Related: Why Does Star Wars 9’s Emperor Palpatine Look Like A Cartoon?

Still, Ian McDiarmid’s voice has now been heard, making the Emperor sound as sinister as ever. ”Your journey nears its end,” he declares ominously, although it’s unclear to whom or quite what he’s inferring.

The Star Wars 9 D23 trailer builds towards its close with another surprise: Palpatine’s voice is followed by Darth Vader’s very distinctive heavy breathing. The shadow of Darth Vader has loomed over the sequel trilogy; Kylo Ren is obsessed with his grandfather to the point that, in Star Wars: The Force Awakens, he considered himself to be continuing Darth Vader’s mission.

This audio cue sets up viewers to believe that Darth Vader has some sort of direct presence in Star Wars: The Rise of Skywalker, although at this stage it’s difficult to say what his role would be; and it could simply be a marketing trick.. Exclusive D23 footage showed that Vader’s damaged mask makes a return, so at the very least his legend lives on.

2. Will Rey Fall To The Dark Side?

The conclusion to the D23 Star Wars: The Rise of Skywalker trailer takes a disturbing turn with a shot of what is clearly meant to be an evil Rey. There’s long been speculation that Rey could be vulnerable to the lure of the dark side; she appeared to have committed herself to the light at the end of Star Wars: The Last Jedi, but that kind of decision is one that a Jedi must mkae every day of their lives. As even Luke Skywalker himself learned to his cost, once you have taken a single footstep down that dark road, you will always be vulnerable.

Related: Star Wars 9 Theory: Why Rey Turns To The Dark Side

The interesting question is whether this is real or not. It wouldn’t be out of the question for this to be a Force vision, encouraging Rey to avoid this or else seeing her confront her greatest fear.

Rey is shown wielding a remarkable double-bladed lightsaber that starts as two parallel blades and flips to create a staff. At first glance, it appears to be similar to Darth Maul’s in Star Wars Episode I: The Phantom Menace, but the handle is longer and the rotating aspect makes it more similar to lightsabers used by ancient Jedi Temple Guards in Star Wars Rebels.

The red hue is, of course, a universal symbol of the dark side; where Jedi bond with the Kyber inside their lightsabers, Sith dominate it with their own will, and it “bleeds” the crystal to a crimson color. What’s most striking here is that the blades crackle similar to Kylo Ren’s broken lightsaber, rather than the clean glow of traditional versions. This suggests the weapon is a new creation.

More: Star Wars 9: Everything You Need To Know