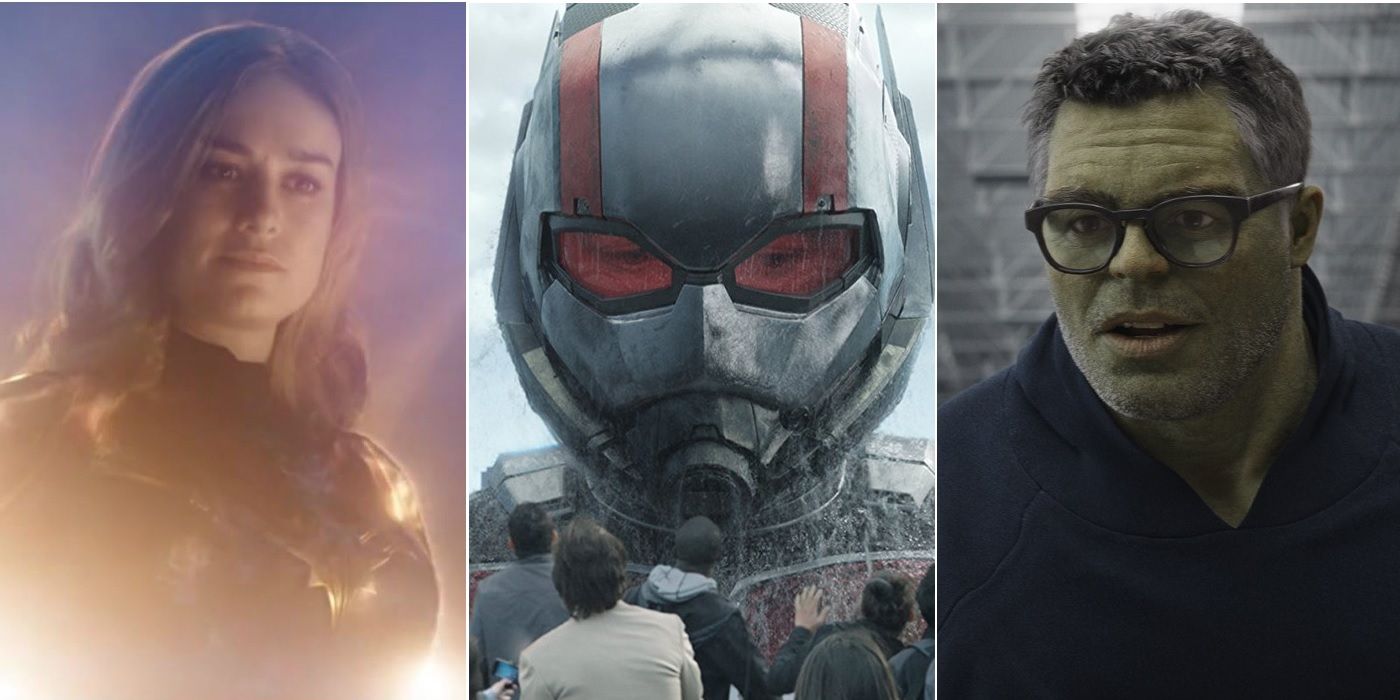 Phase 4 of the MCU is packed with both big screen and television offerings, but some major characters won’t be appearing. At this year’s San Diego Comic Con event, Kevin Feige and a host of A-list stars took to the stage and revealed Marvel’s plans for the next few years, confirming releases such as The Eternals, Hawkeye and Doctor Strange in the Multiverse of Madness. Across all the upcoming projects, Phase 4 of the MCU will feature franchise veterans such as Thor, Clint Barton and Bucky, relative newcomers such as Doctor Strange, Scarlet Witch and Vision and completely new heroes such as Simu Liu’s Shang-Chi.

For the first time, however, Phase 4 will not feature a superhero team-up movie. In the MCU’s previous slates, there has been at least one crossover release that brings all of the major characters together, but the closest equivalent in Phase 4 is the What If…? series, which takes a non-canon look at alternate paths Marvel’s heroes and villains might have taken. Consequently, some major characters look set to miss out on Phase 4 entirely.

Related: The MCU’s Most Selfless Acts Of Heroism

Of course, part of the MCU’s appeal is that virtually any character can appear at any time, especially with post-credits scenes and a brand new streaming service to promote. Ignoring characters who are still alive but whose stories have drawn to a natural conclusion, such as Steve Rogers, and based on what is known so far about the MCU’s immediate future, here are all the main characters that don’t seem to be appearing in Marvel’s Phase 4.

After skipping out on Avengers: Infinity War to mess around with a giant Hello Kitty Pez dispenser, Paul Rudd’s Ant-Man played a major part in defeating Thanos and Evangeline Lilly also reprised her role as Wasp during the climactic battle. This family of size-changing scientists have already clocked two solo movies and a third offering has been rumored, but Scott Lang doesn’t feature in Marvel’s lineup for Phase 4. Since the Ant-Man movies are some of the MCU’s lowest-grossing properties (in relative terms), a third solo adventure is far from guaranteed, but this tight-knit crop of characters have made a strong impression on the franchise and their stories are sure to continue in some capacity.

Whether Kevin Feige is eyeing Ant-Man 3 for Phase 5 or not, Lang is a potential contender to cameo in a number of Phase 4 projects, with The Falcon and the Winter Soldier‘s action/buddy-comedy premise perhaps best suited to Ant-Man’s strengths. An appearance from Paul Rudd would also help legitimize the Disney Plus series as an integral part of the MCU.

The Guardians of the Galaxy

Due to their intergalactic swashbuckling, the Guardians exist mostly separate from the rest of the MCU and, despite their role in recent Avengers movies, both Guardians of the Galaxy volumes have been largely self-contained. This means that Peter Quill and the gang are unlikely to appear until Guardians of the Galaxy Vol. 3, which is more or less nailed on for an early slot in Marvel’s Phase 5, once James Gunn is finished with The Suicide Squad over at DC.

Last time audiences saw the Guardians, however, the group had been joined by Thor, who had resolved to give up his beer-swilling, noob-sniping ways and venture out into space once more. Problematically, Thor is set to feature in Phase 4’s Thor: Love and Thunder, and the presence of Jane Foster in this movie suggests an Earth-based story. In order to bridge the gap, it seems likely that the Guardians will play at least a small role in the fourth Thor movie – perhaps nothing more than a pre-titles appearance where the God of Thunder is dumped back on Earth for getting on Quill’s nerves.

Brie Larson has been a resounding success as Captain Marvel, and a second solo movie is another safe bet for Marvel’s Phase 5. Captain Marvel 2 could be a defining release for Marvel too, with the character under-utilized in Avengers: Endgame due to the storytelling problems created by Carol Danvers’ immense power. Free from the constraints of an origin story or a huge crossover, Captain Marvel 2 should provide the best look yet at this increasingly popular superhero.

Related: Mysterio Is A Better MCU Villain Than Thanos (Because He Means Something)

Since Danvers is apparently unavailable in Spider-Man: Far From Home, and dealing with other planets’ problems for a large chunk of Avengers: Endgame, it’s difficult to see her cropping up naturally in a Phase 4 cameo. With that said, Captain Marvel is surely a cornerstone of the MCU’s future and a small appearance in Phase 4 would help maintain that momentum, rather than allowing the character to sit dormant for several years. Due to their celestial origin and immortality, The Eternals might present the best opportunity for a Carol Danvers cameo, and would provide a relatively unknown set of characters with some added franchise power.

Black Panther 2 is confirmed to be in the works, but with Wakanda officially open to the world, the King and his allies are now free to appear in the wider MCU. As the original Avengers team winds down, Chadwick Boseman’s T’Challa is another character sure to form a key pillar of Marvel’s big screen future and after a limited role in Avengers: Endgame, it would certainly be surprising if Black Panther skipped out on Phase 4 altogether.

The first Black Panther movie was a huge success for Marvel and with no release date set for a sequel, it would make sense to maintain T’Challa’s MCU presence in Phase 4, even if only in a minor way. A potential opening could be offered by Wandavision, in which Vision is confirmed to somehow make his return. If the android is brought back to life proper, Shuri is undoubtedly the scientist best placed to restore Vision to working order without an Infinity Stone at hand, and this could be a reasonable enough excuse for a visit to Wakanda.

Despite never having a solo movie, Samuel L. Jackson’s Nick Fury is one of the longest-serving MCU figures and continues to play a major role in the franchise. The beauty of Fury’s character is that he can feasibly appear at any time, surprising audiences as much as the superheroes in screen, who know all too well that a visit from Nick Fury usually means the Earth is in dire peril. Despite not being confirmed for any forthcoming project, Nick Fury is almost certain to appear in Marvel’s Phase 4, either in a big screen cameo or a short Disney Plus appearance.

Fury’s omniscient presence in the MCU is empowered by the addition of S.W.O.R.D., Fury’s new space HQ, and his use of Skrulls as stand-in agents in Spider-Man: Far From Home. By literally watching over the Earth, Fury’s ability to appear at a moment’s notice only increases. Of course, Fury’s presence would also allow Cobie Smulders’ Maria Hill or Jon Favreau’s Happy Hogan to feature in an upcoming release, even with Spider-Man apparently no longer part of the MCU.

Related: The Best Superhero Movie Performances Of The Decade

Of the original Avengers team, poor Hulk is the only member with a completely free diary for the next two years. Upon the conclusion of Avengers: Endgame, Professor Hulk is alive and well, unlike Stark and Black Widow, and is still actively helping out with the other Avengers, unlike old man Rogers and the retired Clint Barton. Unfortunately, legal issues emanating from Marvel’s original sale of the Hulk rights mean that the studio are unable to make another solo Hulk movie, restricting Mark Ruffalo’s green selfie-magnet to supporting appearances.

Hulk isn’t confirmed to feature in any forthcoming MCU projects and, given how Marvel are now phasing out the Phase 1 Avengers, it’s entirely possible that he won’t feature at all over the next two years. However, Taika Waititi got the best of the Hulk in 2017’s Thor: Ragnarok, and it wouldn’t be unrealistic to expect a further appearance in the director’s next MCU effort, Thor: Love & Thunder, which is set to continue the light-hearted tone and style of the third movie.

Though War Machine may have started out as Tony Stark’s sidekick, he gradually evolved into his own unique superhero over the course of the Avengers movies and Captain America: Civil War. A romance angle between Rhodey and Carol Danvers was even teased in Avengers: Endgame, signalling that, despite Tony’s death, War Machine still has a role to play in the MCU. Weirdly now an Avengers veteran in the MCU’s fictional reality, Rhodey will perhaps act in a supporting capacity moving forward, helping to bring through the next generation of superheroes.

For this reason, holding out for a War Machine solo movie might be a little optimistic, but there are plenty of other opportunities for the character to pass on his expertise in the MCU, and Shang-Chi and the Legend of the Ten Rings would be ideal in this regard. Alternatively, the ever-loyal Rhodey might find himself supporting old friends in Black Widow or The Falcon and the Winter Soldier.