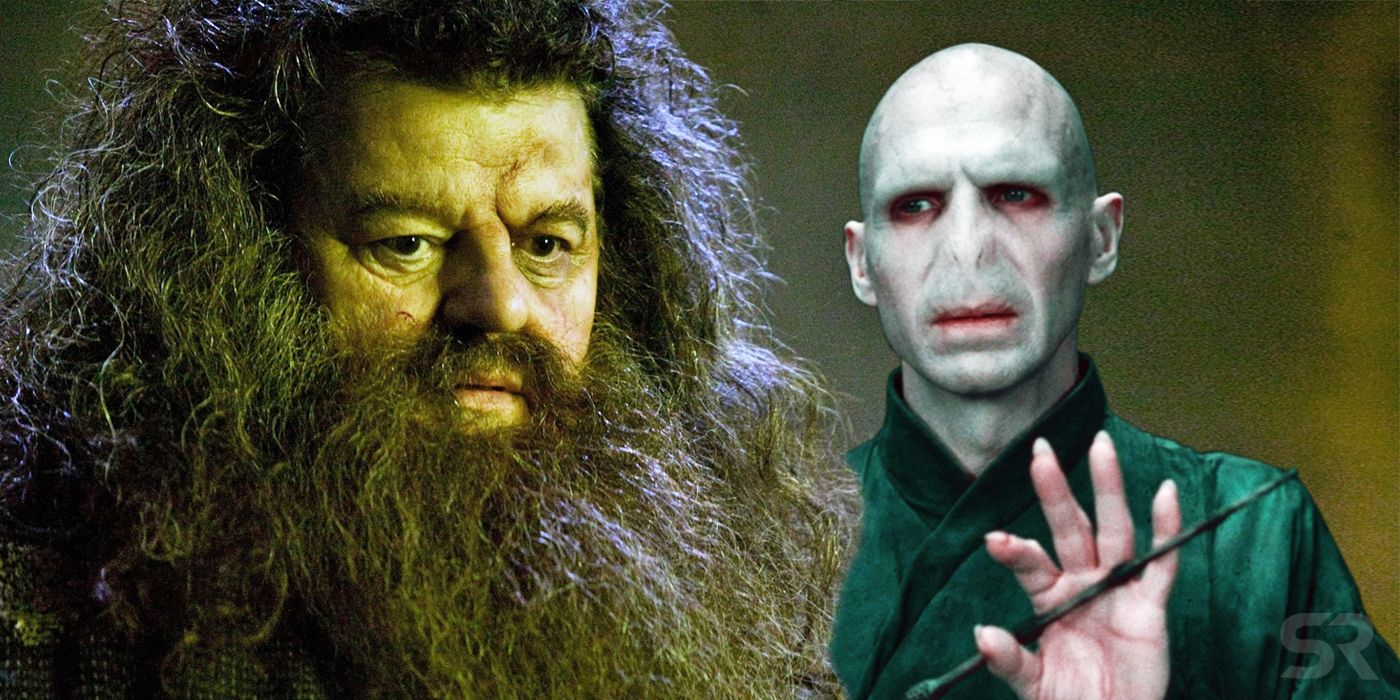 A new theory suggests that Hagrid, one of the most beloved Harry Potter characters of all, could secretly have been one of Voldemort’s Death Eater. J.K. Rowling is undoubtedly one of the greatest literary talents of the present day, and key to her success is her love of meticulous planning. Over the years, she’s developed a reputation for having every detail of her stories planned out years before she ever put pen to paper.

In truth, that reputation is a little overstated. A critical eye will notice considerable inconsistencies running through the Harry Potter books, reflecting the fact that Rowling never truly realized how big the phenomenon would become, or how avidly fans would pore over every detail in her novels. The classic example is Hagrid, who is usually portrayed as a good-natured but ill-witted half-giant who bellows out secrets in the pub, but is somehow still trusted with the details of many of Dumbledore’s schemes. This kind of inconsistency is an inevitable part of the writing process, especially when a single author has been working on an ongoing narrative for some 17 years; Rowling began writing the first book in 1990, and the last was published in 2007.

Related: What Happened To Hagrid After Harry Potter Ended

Or is it an inconsistency? Or are they clues to Hagrid’s true nature? That’s what Redditor Whoofph has impressively put forward in his detailed theory that Hagrid may actually be a secret Death Eater. It most certainly isn’t what J.K. Rowling intended, yet it fits together incredibly well.

How Hagrid As A Death Eater Works

According to this theory, Hagrid was actually part of Tom Riddle‘s circle back when they were at school together. Although Riddle ultimately framed Hagrid for opening the Chamber of Secrets, the two remained in contact over the years, with Hagrid’s fascination with illegal creatures meaning they tended to operate in the same dark magic circles. This led to Hagrid operating as one of Voldemort’s spies in the Order of the Phoenix during the First Wizarding War, and secretly remaining loyal to the Dark Lord even after his defeat.

It sounds a stretch, but there’s a disturbing amount of circumstantial evidence. Firstly, in Harry Potter and the Chamber of Secrets a flashback reveals that Hagrid and Voldemort not only attended school together – they were on a first-name basis. What’s more, in Harry Potter and the Sorcerer’s Stone, Hagrid explicitly tells Harry that Voldemort used to attend Hogwarts and even that he was a Slytherin back in his schooldays. That makes Hagrid one of just three non-Death Eaters – the others being Dumbledore himself and Horace Slughorn – who associated the handsome and charismatic Tom Riddle with the monstrous Lord Voldemort. Hagrid even seems to show a hint of knowledge about Horcruxes, telling Harry that he doesn’t know if Voldemort “had enough human left in him to die,” an uncommon opinion among wizards that was remarkably close to the truth.

Hagrid was one of the earliest members of the Order of the Phoenix, and participated in the First Wizarding War. He’s hardly inconspicuous, but survived apparently unscathed, and indeed played a key role at the end of the conflict. In Harry Potter and the Sorcerer’s Stone, he was the first to arrive at Godric’s Hollow after Voldemort killed the Potters, even beating the Muggle emergency services. Given Hagrid can’t Apparate or fly a broom, and he only picked up the motorbike from Sirius while at Godric’s Hollow, the logical explanation is that he was already close by. Meanwhile, it’s pretty obvious that some of the first wizards on the scene were Death Eaters, given Voldemort’s wand was saved and then given back to him when he eventually returned to England. The theory suggests Hagrid had been a deep-cover agent who was near to Godric’s Hollow on Voldemort’s orders, and rushed to the scene after the Dark Lord’s defeat. He knew enough of Horcruxes to be confident Voldemort wasn’t truly dead, and saved the wand before taking the baby Harry to the Dursleys.

Related: Fantastic Beasts Has Changed The Order of The Phoenix’s Origin

Importantly, Hagrid is theorized to have remained loyal to Voldemort after his disappearance. He carefully positioned himself close to Albus Dumbledore as the Keeper of Keys at Hogwarts, and developed relationships with senior figures in the Order of the Phoenix and the Ministry of Magic; in Harry Potter and the Prisoner of Azkaban, Hagrid goes out for drinks with the Minister of Magic himself. And when Harry Potter arrives on the scene, of course, Hagrid steps up his game.

Hagrid is the one who first tells Harry Potter that he’s a wizard, and he goes to great lengths to build a close relationship with Harry and his friends. It’s never portrayed as a particularly healthy relationship, with Hagrid turning a blind eye to – and even encouraging – Harry’s breaking a lot of school rules. In the end, Harry Potter and the Half-Blood Prince invites readers to question Hagrid, with the half-giant distraught because the schoolchildren aren’t spending as much time with him. He begins to passive-aggressively guilt trip them, until they eventually seek out his company again.

The theory posits that, as a result of his access to both Harry Potter and to Albus Dumbledore, Hagrid continually lets slip information that’s critical to Voldemort’s plans. He’s the one who tells Voldemort himself how to get past Fluffy in Harry Potter and the Sorcerer’s Stone, and his recollection of those events is far clearer than you’d expect from someone who was as drunk as he claims to be. In Harry Potter and the Order of the Phoenix, he ensures Harry knows all about Thestrals, giving him a way to get to London. And finally, in Harry Potter and the Deathly Hallows, Hagrid does his level best to sabotage the attempt to rescue Harry from the Dursleys’ house. He carelessly bellows Harry’s name no less than 14 times, as though announcing to all the world that he’s with the real Harry.

There are two particularly interesting examples that suggest Hagrid could have been working with Voldemort. The first is in Harry Potter and the Sorcerer’s Stone, when Hagrid chooses to take first years into the Forbidden Forest – and consequently sets up a potential meeting between Voldemort and Harry. Then, in Harry Potter and the Goblet of Fire, Hagrid conspires with Barty Crouch to ensure Harry wins the Triwizard Tournament. It’s not hard to envision that as a concerted effort to hand Harry Potter over to Voldemort on a silver platter.

Hagrid’s Powers and Personality Are Inconsistent

So far, the evidence all seems circumstantial at best, and arguably runs counter to J.K. Rowling’s portrayal of Hagrid in the books. The problem, however, is that Rowling’s version of Hagrid isn’t exactly consistent. For all Hagrid may have been one of Dumbledore’s closest allies, he has a pretty harsh attitude towards Muggles; he performs illegal magic on Dudley Dursley in Harry Potter and the Sorcerer’s Stone, and repeatedly refers to the Dursleys as “filthy Muggles” throughout the entire series. That seems to be the worst insult Hagrid could think of, which perhaps testifies to his own prejudices.

Meanwhile, Hagrid’s normal bumbling and slightly witless manner is at odds with his mission for Dumbledore in Harry Potter and the Order of the Phoenix. When recounting the story of his adventures convincing the giants to side with them in the war to Harry, Hagrid unwittingly demonstrates strong situational awareness, brilliant judgment, and an ability to negotiate and lie: he recognizes trained Ministry of Magic agents who are shadowing his team, and deploys counter-surveillance techniques to throw them off; and, his negotiations with the Giants are conducted with a degree of caution and empathy that’s quite remarkable, especially when the trip should be an emotional one for Hagrid. This tale should naturally lead readers to question whether there could be more to Hagrid than meets the eye.

Even Hagrid’s powers are inconsistent. Hagrid is supposed to have been banned from doing magic in his third year, when his wand was snapped in half. And yet, on his first appearance in Harry Potter and the Sorcerer’s Stone, he performs some of the most advanced magic seen in the entire Harry Potter series. He gives Dudley Dursley a pig’s tail, performing a non-verbal Transfiguration spell with a wand that’s been snapped in half. Transfiguration isn’t taught until N.E.W.T. level – Hermione was the only one in her class who managed to change the colors of her eyebrows – and many wizards never master non-verbal magic at all. This, too, raises the possibility that Harry and his friends never truly get the measure of Hagrid.

Finally, it’s worth noting that there are a handful of occasions where Hagrid seems to get from place to place at unusual speed, potentially even possessing the power of unaided flight. In Harry Potter and the Sorcerer’s Stone, for example, Hagrid collects Harry from a deserted island and claims to have flown there. It’s possibly Harry misheard, and Hagrid actually said “Floo,” but that’s unlikely; there was only one cottage on the island, meaning there were no other fireplaces to hook up to the Floo Network. Fast-forward to Harry Potter and the Deathly Hallows, and Hagrid claims to be too heavy to ride a broom or even a Thestral. The most logical possibility is unaided flight – which is a trick Voldemort taught to his closest Death Eaters.

Why Hagrid As A Death Eater Deepens Harry Potter

Of course, J.K. Rowling surely didn’t really intend to imply that Hagrid was a Death Eater; Hagrid is simply affected particularly badly by the reality of the writing process. When Rowling wrote Harry Potter and the Sorcerer’s Stone, she had no idea how her world would evolve, and as a result there are notable continuity issues between this and the rest of the Harry Potter story. Meanwhile, the characterization issues in Harry Potter and the Order of the Phoenix are easily explained; Rowling suffered from severe writer’s block while working on that book, with the growing pressure of the Harry Potter franchise weighing down upon her. Given that context, a few narrative and characterization stumbles are to be expected.

But, assuming for a moment that this is all true and that Hagrid is indeed a deep cover Death Eater operating inside the Order of the Phoenix, he becomes a far more complex character, one whose story takes quite a few twists and turns. Hagrid’s story culminates in Harry Potter and the Deathly Hallows, where he’s mysteriously taken alive by the carnivorous Acromantulas. He’s subsequently ordered by Voldemort to carry the body of the Boy who Lived into Hogwarts Castle – and, curiously, this experience seems to have been a key moment in his life. The tears that streak down Hagrid’s cheeks as he carries Harry’s body can be seen as tears of regret, perhaps indicating he’d come to genuinely care for Harry. That leads him to finally participate in the Battle of Hogwarts, opposing Voldemort at last; although even then Hagrid focuses on a personal grudge against McNair, who had attempted to execute one of his pets.

The interesting question is whether or not Albus Dumbledore knew of Hagrid’s treachery. It’s entirely possible that Dumbledore suspected Hagrid and operated under the old maxim of “keep your friends close and your enemies closer.” Dumbledore would surely jump at the opportunity to have a known Death Eater under close observation, perhaps unwittingly giving him insight into Voldemort’s plans. Meanwhile, when Dumbledore finally brought Harry into the loop in Harry Potter and the Half-Blood Prince, he ensured the teenager spent less time with Hagrid and was warned not to tell anyone what they were doing. J.K. Rowling has always presented Dumbledore as the supreme manipulator, and as such, it wouldn’t be a surprise to see him factor a traitor into his plans.