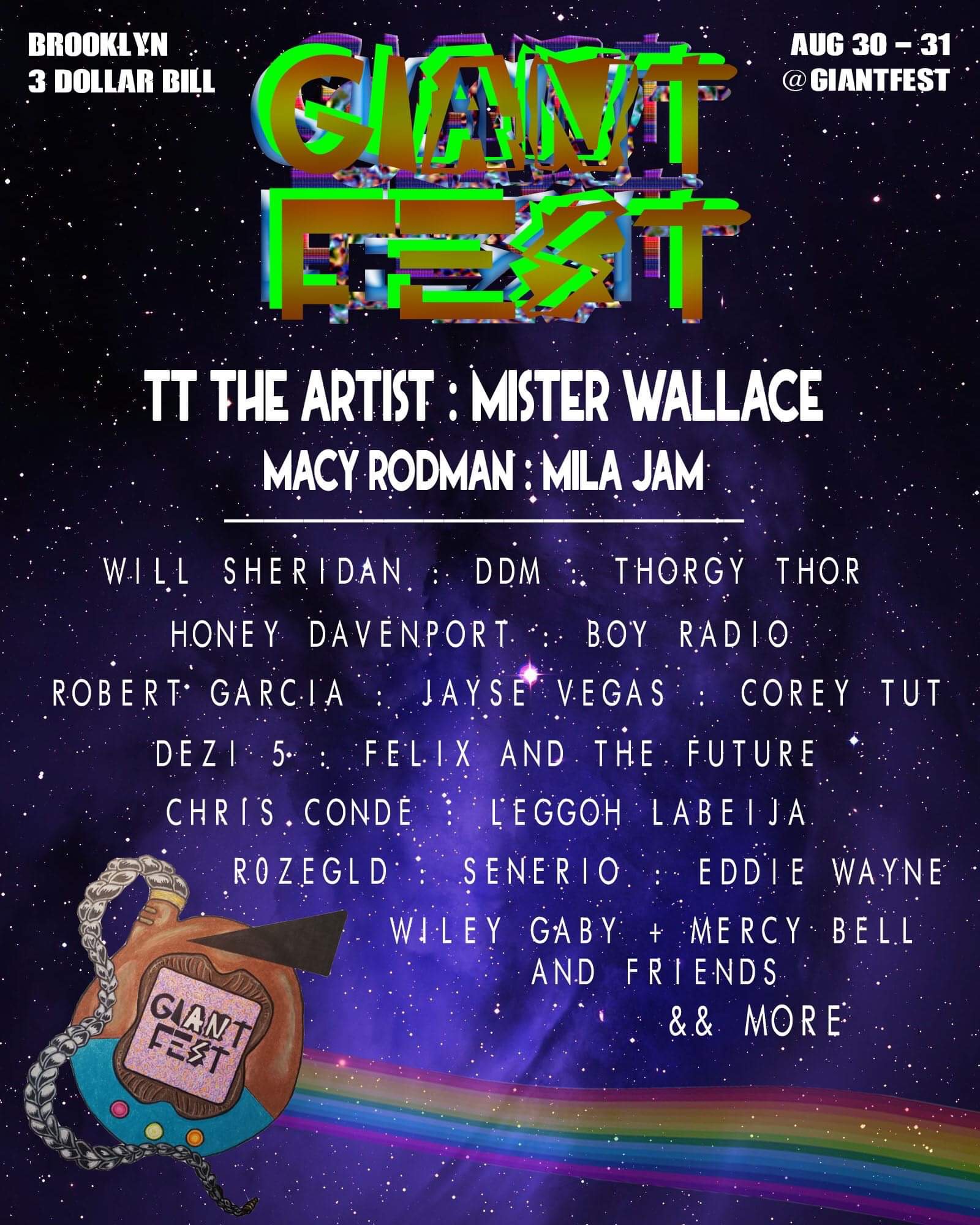 Brooklyn, NY – Will Sheridan #GIANT made the first announcement, via all social media, about the first ever GIANT Fest. This two day, all inclusive queer music festival takes place Friday & Saturday, August 30th & 31st, at 3 Dollar Bill, Brooklyn. Located ​in the heart of East Williamsburg, approximately a 3 minute walk from the Montrose Avenue Station (L Train). GIANT Fest is the perfect break for music aficionados who want to experience great original LIVE music by queer artists ​within a space that represents our commitment to incluson and the celebration of queer identities.

In an effort to build a new awareness and embrace for queer music artists, Will Sheridan has released a short documentary about a weekend glimpse of his fabulous New York City life during World Pride, called “A Weekend with Giant” (Watch here – ​https://bit.ly/2GZz284)​ . Following the documentary is “The Small Talk Series”(Watch here- h​ttps://bit.ly/2OZQyiK​),a series of 12 interviews of 11 queer music artists, and 1 drag artist, on a personal Q & A of their life, career, and relationship with curator WIll Sheridan #GIANT. “The Small Talk Series” began August 9th 2019 with a new episode release almost every other day leading up to the opening night of GIANT FEST 2019.

During the festival, guests will be greeted by none other then Glam Award Best Nightlife Blogger, Th0tyssey, who will be filmed live interviewing in a style almost reminiscent of TV personality Joan and Melissa Rivers at the red carpet. In the concert area, guests will experience a jam packed 2 day lineup featuring some of the best queer music talent BK & NY nightlife has to offer. Located at the back of their venue, 3 Dollar Bill is also the proud home of Del Sur Cocina. Del Sur will be serving tacos, burritos and burgers, jam packed with flavor, to guests at such an affordable cost. From the state of the art sound and lighting to the full live music set up with stage, Will Sheridan aims to truly maximize the queer music experience.

Debuting in one of the largest queer venues in Brooklyn, GIANT Fest at 3 Dollar Bill is the ideal queer music festival for music & entertainment lovers of all kinds. To expand the options for our guest, GIANT Fest provides a wide variety of social and artistic encounters; from a live painting art installation, to trendy local vendors, virtual reality games, live tattoos, tarot card readings, photoshoot booth and many more. This disneyland-style programming, in the sense of curating a space with multiple happenings, was specifically designed so guests could either watch great music or enjoy some pop ups and live art. Keeping the mental health of the queer community as a top priority, GIANT Fest plans to use the large outdoor patio as an area for therapy, homemade body products, crochet and clothing, meditation, & more.

GIANT FEST 2019 features a wide range of queer music acts, spanning genres from Pop, Rap, Deep House, Hip Hop, R&B, Indie Folk, Americana and many more. Artists include favorites like headliner,​ TT The Artist,​ who has collaborated with Grammy winning producer Diplo. Her vocals were featured on “​Dat A Freak,” and released under​ Diplo’s Mad Decent​ record label as a single. Following TT’s collaboration with ​Diplo​, pop icon ​Jennifer Lopez​ reached out to ​Diplo for her single “Booty” sampled from ​Diplo’s​ collaboration on the Dat A Freak record earning ​TT The Artist​ her first songwriter credits and a major artists album. Also coming to light the stage is Pop Recording Artist and self proclaimed “Local Beyonce” ​Mila Jam​, who recently released her music video for “Stop Killing Us”. The rawness of her performance about the overall violence and injustices against the trans community, in time to share the experience with more fans at the festival. Other major acts include ​Macy Rodman,​ ​Mister Wallace​, ​DDM​ & many more. Rolling in from NYC, R​upaul’s Drag Race ​Season11 Star​ Honey Davenpor​t is set to make an appearance and perform an entire music set. Following H​ oney’s ​journey after Drag Race, she’s been very busy pushing new music out, with features from familiar faces like Season 11 winner  Yvie Oddly,​ ​The Voice N​ebra Belle, Jayse Vegas, and none other than curator of GIANT Fest, ​Will Sheridan #GIANT.​ The wide variety of music acts will be sure to keep the crowd on their toes and yearning for more. ​Felix and The Future​ will also be appearing on the GIANT Fest stage, bringing his signature headpiece and taking you on a celestial journey to another dimension. Solo artist D​ezi5 i​s also set to perform at GIANT Fest, with a versatile mix of funk, deephouse, and natural instruments. Collaborators R​ obert Garcia ​and ​Jayse Vegas a​ re set to perform their duet single “Meet Me On The Moon” as well as their own new releases from their latest music projects “The Gay Agenda” & “BoyGirl”. Both are available on iTunes, Apple Music, Spotify and more. E​ddie Wayne​ is also locked in to perform at the festival, and he plans to bring the house down with bounce booty music reminiscent of B​ig Freedia​. 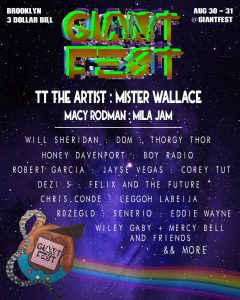 Will Sheridan Jr​, curator of GIANT Fest, is a former basketball player who played for Villanova Wildcats from 2003 to 2007. He is now a Brooklyn based rapper, musician and recording artist. His music releases include “G.I.A.N.T”, his first full length LP, “G2R”, “LexIcon”, all available on all online music outlets. In addition to being a LGBT Sports and Music pioneer, he is a professional event coordinator with a New York based production company.

DIRTY RED GLOVE. i​ s a New York based media content creating company for queer artists and individuals, founded by Senerio Baptiste, and they teamed up with GIANT Fest to produce “A Weekend with Giant” and “The Small Talk Series”. They cover a wide range of production services from start to finish. From short documentaries to music video to editorial + e commerce shoots.

“We are extremely grateful that we are so warmly welcomed by Program Director, ​Frankie Sharp​, and the rest of the team at 3 Dollar Bill. We are looking forward to creating a space that highlights queer music artists with quality music and art everyone can enjoy,” said Will Sheridan.

Will Sheridan and friends will perform at GIANT Fest on Friday & Saturday, August 30th & 31st, from 4pm-4am both days. Tickets range from $35 – $75 and can be purchased at https://giantfest2019.eventbrite.com​ or in person at 3 Dollar Bill at 260 Meserole Street.