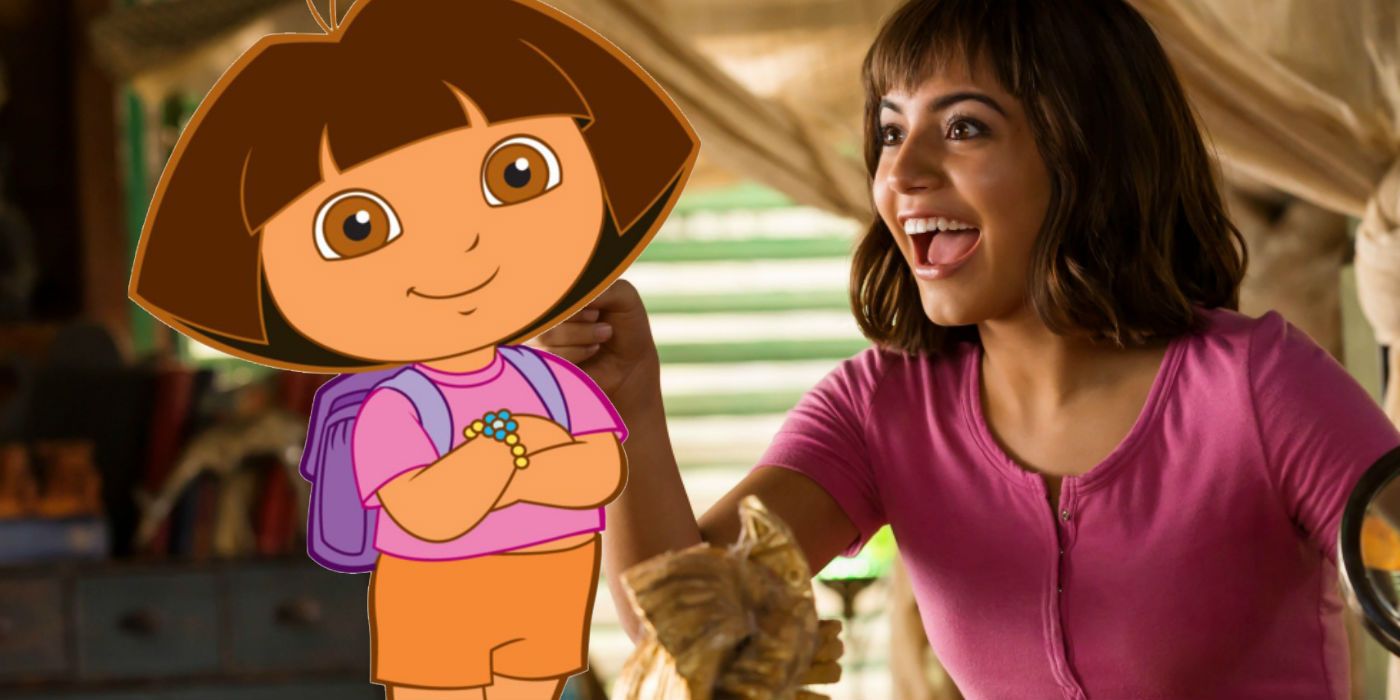 Warning: SPOILERS for Dora and the Lost City of Gold.

Paramount’s Dora and the Lost City of Gold gives new meaning to Nickelodeon’s Dora the Explorer series – by making it canon within the live-action movie. James Bobin’s feature film adaptation premiered on August 9, the same day that the animated children adventure series concluded its 20-year run. Dora and the Lost City of Gold pays tribute to its source material by making Dora the Explorer a canonical series in the weirdest and most wonderful way.

In Dora and the Lost City of Gold, Isabela Moner stars as the title character. Like the animated Dora, she lives in the jungle and has a pet monkey named Boots. The young explorer begins a new life in California while her parents investigate a lost Incan civilization. Dora’s specialized knowledge impresses her peers, but her unusual behavior bothers her cousin Diego (Jeff Wahlberg). When Dora’s class trip is kidnapped, she’s returned to the jungle where she attempts to reunite with her parents, assisted by her confused classmates and a nervous treasure hunter named Alejandro Gutierrez (Eugenio Derbez).

From beginning to end, Dora and the Lost City of Gold takes a wink-of-the-eye approach to acknowledging its source material. The movie begins with a younger version of Dora bonding with her cousin Diego. Like the animated Dora, the live-action version breaks the fourth wall and says “Delicioso!” - only there’s something off about her demeanor, and how others react to her behavior. The sequence ends with Dora declaratively stating that “Boots can talk,” suggesting that the animated series’ premise is based on live-action Dora’s wild imagination.

When Dora and the Lost City of Gold jumps ahead 10 years, Moner’s dialogue parallels the animated series, only her audience is imagined. Like the original Dora, the big screen version treats her backpack like its a friend. For clarity, the filmmakers make it obvious that Dora has constructed a fantasy world that only she knows. During an early comedic moment, Dora breaks the fourth wall again and hilariously states “Can you say ‘severe neural toxicity’?” – a moment that simultaneously pays homage to the animated series and confirms that live-action Dora shifts between reality and fantasy.

Before Dora and the Lost City of Gold’s California kidnapping puts Dora back in her element, she first has a chance to embarrass her cousin with her bizarre behavior. Upon reuniting with Diego, she eats a 10-year-old candy bar from their childhood. Dora also sings a backpack song, and performs a “peacock dance” for her classmates. These surreal moments speak to director James Bobin’s comedic past, as he co-created infamous characters like Alistair Leslie Graham (Da Ali G Show), Borat Sagdiyev (Borat), and Brüno Gehard (Brüno) with Sacha Baron Cohen, as well as directing two Muppets films. For Dora and the Lost City of Gold, he thematically approaches the storyline like the title character is a caricature of her imagined self. Ultimately, Dora’s imagination and education prove to be quite helpful. But as a whole, Dora and the Lost City of Gold implies that future installments will feature a more self-aware Dora.

Through Swiper the Fox, Dora and the Lost City of Gold retains a fantastical element from the Nickelodeon series. The character speaks throughout the film, but it’s never made clear how that’s possible. During the film’s climax, Dora and the Lost City of Gold gets even weirder as Dora and company hallucinate upon entering a flower field, and the live-action shifts to animation. The TV show may have come to an end, but now 20 years of Dora the Explorer episodes can now be rewatched with the idea that we’re actually seeing the live-action Dora’s unique point of view.

More: Exclusive: Isabela Moner Wants To Go To College In A Dora Sequel