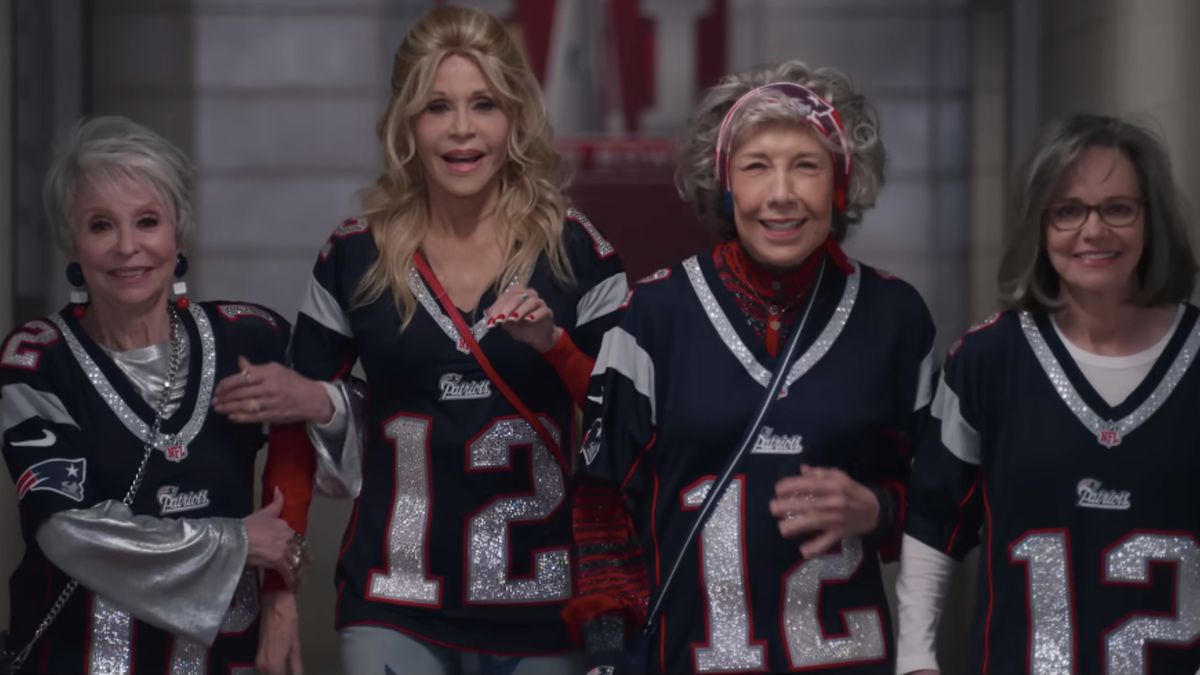 Since Tom Brady called off his NFL retirement, fans have still been seeing a lot of him but not just on the gridiron, though. He’s been engaging in other ventures, including a big-screen production. You’ll be able to see him in the upcoming movie 80 For Brady alongside some true Hollywood royalty. The film has been promoted for months, but it would seem that Twitter users only recently discovered what the plot entails. With that, they took to the social media platform to voice their thoughts on it.

80 for Brady is about four older women (played by acting legends Jane Fonda, Lily Tomlin, Rita Moreno, and Sally Field) who are fans of the New England Patriots. The tale sees the group travel to Houston in order to see their hero, Tom Brady, play at Super Bowl LI. Since it hasn’t come out, we can’t judge the film just yet, but people are still voicing their honest thoughts on the story and more. One tweet had a very spicy reaction about the film’s release:

That’s a very honest response, to say the least. Comedies can definitely be hit or miss, especially those that see veteran strs as characters put in quirky situations. Poms is such a movie, which brought together Diane Keaton, Jacki Weaver, and Rhea Perlman, as a group that starts a cheerleading squad only to endure. Sadly, the movie became the worst box office flop of 2019. As for Brady, nother Twitter user had a very negative reaction to the upcoming movie.

This probably isn’t the first movie that one would think of for the Golden Globe and Oscar winners. They done just about everything at this point, from comedy to drama. 80 for Brady may not reach the heights of Steel Magnolias or 9 to 5 but, I guess, at the very least,  it features Guy Fieri and football madness, right? And there are some who would like to check out the movie and support its stars, as this mixed-review tweet suggests:

80 FOR BRADY puts me in a very challenging position because I absolutely hate Tom Brady but love Actresses over 70 with multiple awards pic.twitter.com/UAgElZYKTZJanuary 21, 2023

Football ties certainly run deep and, because of that, there are plenty of people who opt to root against Tom Brady, both on and off the field. But of course, for many, any opposition they have towards the famed quarterback may be overshadowed by their love of the actresses involved. Though one social media user seems to have made their position quite clear:

Tell us how you really feel. A common thread amongst these comments is that some are thinking up their own ideas for alternate storylines One Twitter post had another thought on how these high-profile actresses can be on screen together, and it involves Jimmy Kimmel Live!:

Why isn’t this the movie instead of the glorified Tom Brady Super Bowl ad? https://t.co/sHTg8yX06KJanuary 21, 2023

Well, at the very least, the Super Bowl-winning quarterback did have the love and respect of his co-stars while filming. Jane Fonda admitted that she “got weak” in the knees Brady. Still, it’s quite clear that the movie is just going to have its share of critics. One more Twitter response was particularly brutal toward its poster:

OK so the premise of “80 for Brady” is that the protagonists are fucking oldTheir age is in the title of the fucking movieTo which I ask: why must the studio still insist on photoshopping them to the shithouse pic.twitter.com/nXgkU7XmkxJanuary 18, 2023

While they say a woman should never reveal her age, the comedy film’s title sure took care of the job. With so many people already down about this movie before its premiere, it looks like these veteran actresses and an NFL star won’t be enough to make bank at the box office. It could end up flopping as Poms did. We won’t have to wait too long to find out as the 2023 movie release is coming to theaters on February 3rd.