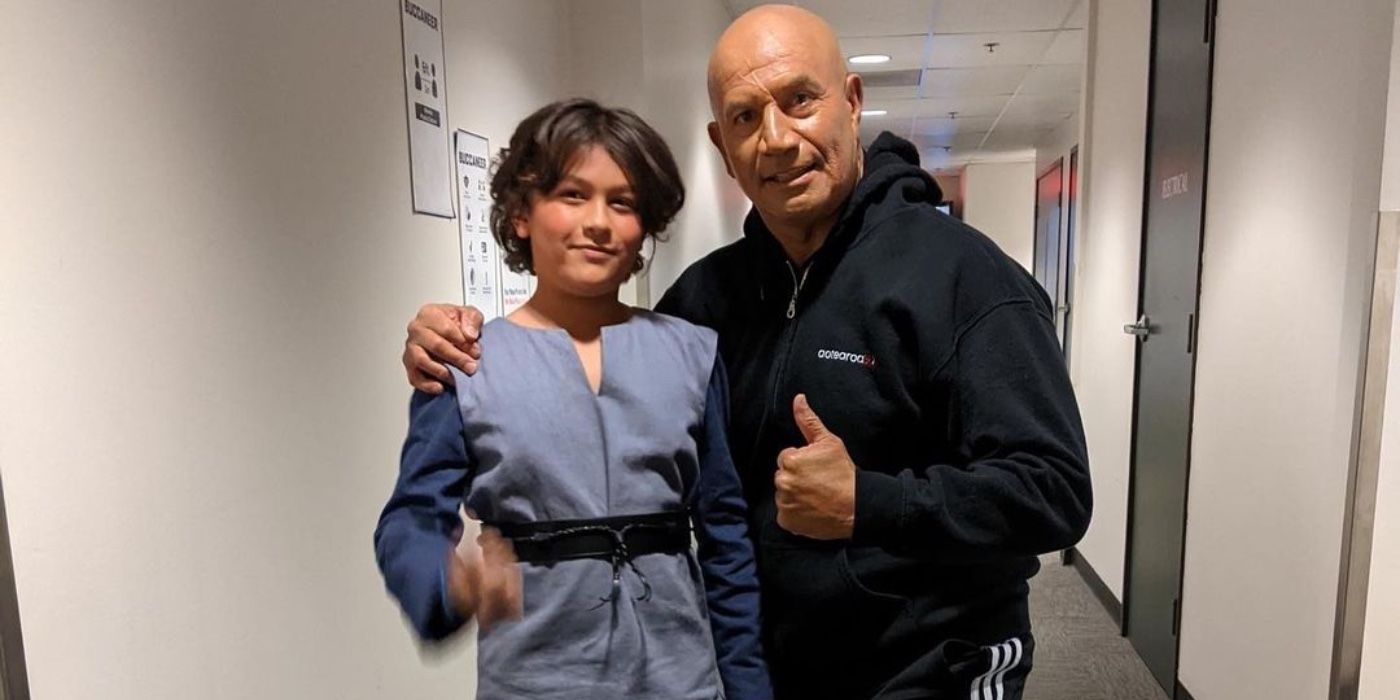 A set photo from The Book of Boba Fett reveals the new actor, Finnegan Garay, playing a younger version of the titular character. Last month, the latest entry into the live-action Star Wars universe premiered on Disney+. Created and written by Jon Favreau, Book of Boba Fett serves as a spin-off of his previous series, The Mandalorian, which revealed the legendary bounty hunter was still alive after his famous fall into the Sarlacc Pit during the events of 1983’s Return of the Jedi.

Temuera Morrison and Ming-Na Wen return to lead the cast of the new show as Boba Fett and Fennec Shand, which also includes appearances from high-profile co-stars like David Pasquesi, Jennifer Beals, Stephen Root, Sophie Thatcher, and Danny Trejo. Book of Boba Fett picks up where The Mandalorian season 2’s post-credits stinger left off as Boba and Fennec kill Bib Fortuna and take his throne while also flashing back to the bounty hunter’s time with the Tusken Raiders. Over the years, many different actors have portrayed Boba Fett in various media, but now thanks to the new Disney+ show, another actor has joined those ranks.

The new young Boba Fett actor recently opened up about his involvement in the Star Wars show. On Instagram, Finnegan Garay posted a photo from the set alongside the current Boba Fett actor, Temuera Morrison. In the caption, Garay expressed his gratitude for being a part of the franchise in a small way. Check out the photo below:

Book of Boba Fett is three episodes into its run on Disney+, and there have already been a few flash flashbacks to Geonosis and the titular character’s childhood on the aquatic planet of Kamino. Daniel Logan previously played this role in the 2002 prequel movie, Attack of the Clones. Since he is a bit too old for the role now, Garay was used as a body double to create new shots of young Boba, who is now the fourth actor to portray the character in live-action after Jeremy Bulloch, Logan, and Morrison.

Garay is credited for the first three episodes as the body double for young Boba, while Logan is still credited for playing the young version of the character, which means they are likely using both actors to render a CGI version as they previously did with Luke Skywalker in The Mandalorian. How the young version of the bounty hunter will factor into the remaining episodes of The Book of Boba Fett remains to be seen.

Next: Star Wars Has Already Setup Boba Fett’s Best Replacement (For When He Dies)

Adam Bentz is a movie and TV news writer for Screen Rant. From a young age, Adam has been interested in a wide range of movies and television, but it was talented auteurs like Quentin Tarantino, Paul Thomas Anderson, and Aaron Sorkin who ultimately sparked his interest in the craft. Motivated by his love for the screen, Adam studied creative writing with a concentration in screenwriting at Southern New Hampshire University.

After graduating, Adam interned as a writer with The Borgen Project, a nonprofit organization working to end extreme poverty. Other than writing for Screen Rant, Adam reviews films on his website adambentz.wordpress.com