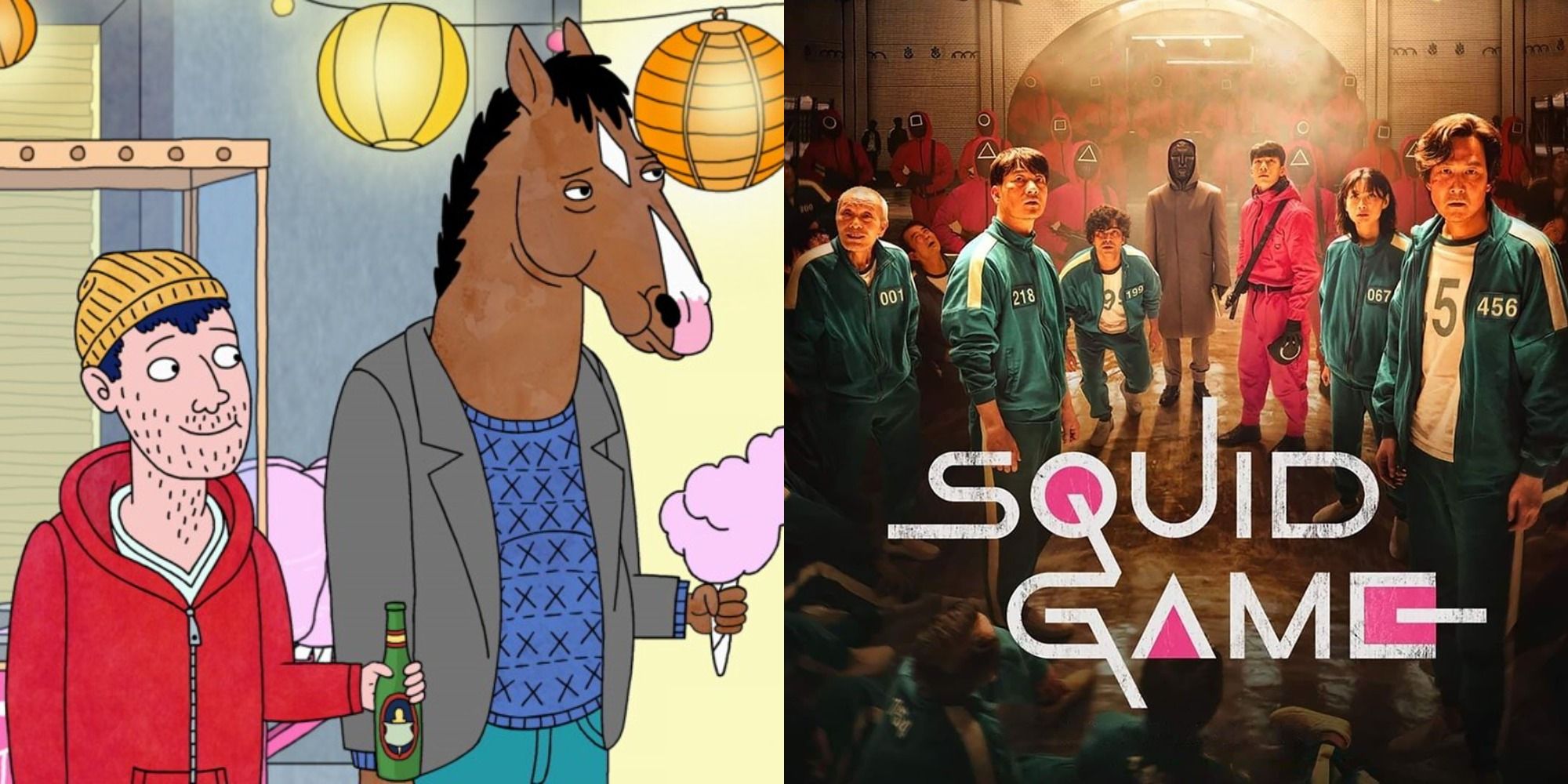 The characters in Bojack Horseman often struggle with confronting and dealing with their real-life problems due to their trauma, deteriorating mental health, or simply the pressures of the “Hollywoo” lifestyle.

Related: 5 Characters In Bojack Horseman We’d Love To Be Friends With (& 5 We’d Rather Avoid)

At first glance, it may be assumed that this would mean it is difficult or even impossible for these characters to compete in the brutal Squid Game. However, each of their character traits and coping mechanisms -both quirky and off-putting- may just give one or two of these characters an advantageous edge (or perhaps a debilitating shortcoming) in the games. So which of these features would mean failure, and which victory?

Many of Mr. Peanutbutter’s traits would lose him the winning spot in Squid Game. His naïve, people-pleasing nature, especially towards the extremely selfish Bojack, who shows open annoyance towards Mr. Peanutbutter, would make him an easy target to manipulate.

The lovable labrador also displays a dim-wittedness as he often misses the subtext of situations, and misuses and misunderstands various idioms and expressions. This indicates he wouldn’t be sharp enough to sus out alliances or the nature of each game in time to make strategic decisions. Combined with his impulsive, excitable nature, Mr. Peanutbutter wouldn’t last long in disciplined, patience-based games like Red Light, Green Light.

Coming in a very close second to last in Squid Game is Pickles Aplently. Pickles is very similar to her love interest, Mr. Peanutbutter. Like her romantic counterpart, forgetful Pickles isn’t the brightest and shows herself to be easily distracted, extroverted and excitable.

However, Pickles seems to care much less about appearances impressing others as she openly tells Mr. Peanutbutter she hates the show he stars in during its premiere. Despite the lack of self-awareness in this comment, this indicates that she is not as predisposed to people-pleasing and would not be as easy to manipulate in the games.

Diane is an intellectual who can separate emotion from logical self-centric decisions, a trait necessary to last in Squid Game. For example, she portrays Bojack in an unflattering light in the book that she writes about him despite him feeling hurt and betrayed by this. When he confronts him for this, she harshly publishes a few chapters online in a calculated move to drum up hype for the book, despite her now being close with Bojack.

However, Diane eventually apologizes for this book and despite this occasional cold business decision, Diane frequently shows a great deal of compassion is one of the only characters that is empathetic with Bojack. Diane could not rank higher than this spot as empathy is a liability in Squid Game.

Hollyhock shows a considerable amount of resilience in season 4 of Bojack Horseman as she travels across the country alone at a very young age just to reach out to Bojack, in hopes of getting in touch with this potential biological relative.

Related: 5 Of The Best Relatives In The BoJack Horseman Series (& 5 Of The Worst)

What’s more, she even knocks out both Todd and Bojack with chloroform just to get access to Bojack’s house and get some of his DNA, raids his belongings, and lets Todd take charge of the cleaning jobs that she is supposed to do. Pretty ruthless behavior, necessary for any Squid Game survivor. However, Hollyhock’s sweetness and very young age as a teen would also likely make her an easy target for manipulation in Squid Game. The laziness that she shares with Bojack would also be a disadvantage in the physical trials.

Gina’s jaded personality through years of trying to make it as an actor may make her cynical and determined enough to make it through a few rounds of Squid Game, especially when her resolve does not even shake after being assaulted on-set by her co-star mid-shoot.

Instead of risking the incident overshadowing her talents, as she sees that she is finally being recognized for acting, Gina continues the pursuit of her dream. Gina is however liable to the occasional agitated outburst, which may make the patience-focused rounds such as the honeycomb game or glass panels game a challenge for her.

The troubled former child star’s fearlessness would take Sarah Lynn quite far in Squid Game. Being brought up with the pressures of expected stardom would also give her a competitive edge. However, Sarah Lynn is very much at the mercy of the characters surrounding her, similar to Squid Game‘s Han Mi-nyeo who often relies on the resources of others throughout the games until she uses similar fearlessness to eliminate both herself and Jang Deok-su -who betrayed her.

Sarah Lynn is left surrounded by terrible influences especially the selfish mentor-figure, Bojack, who lets her down, again and again, and is largely responsible for her overdose. As a vulnerable young woman that has a history of being exploited, Sarah Lynn would be betrayed in the games by the likes of a figure like Bojack.

Not only does Bojack have the selfishness and cynicism necessary to ruthlessly plow ahead in the game, but he also frequently displays the intelligence required to figure out each game and plot his strategy. What would hold Bojack back would be his poor physique caused by his laziness and addictions.

With no real long-term connections to come home to and no need for the copious prize money, often even expressing that he doesn’t want to be alive and taking part in reckless life-endangering behavior like drug abuse, once even getting himself into a car accident deliberately to gain access to prescription opioids. Bojack’s lack of motivation or drive to win Squid Game combined with his lack of concern over his own life would mean that he wouldn’t make it out alive of the survival game.

Judah is ruthlessly efficient and organized. His meticulous planning, attention to detail, and outright devotion to Princess Carolyn’s career and schedule demonstrate the discipline and attentiveness that would serve well in Squid Game. With the only thing able to break his calculated demeanor being Princess Carolyn herself, Judah would have no issue tirelessly fighting his way back to the feline he loves.

Related: One Quote From Each Main Character In Bojack Horseman That Perfectly Sums Up Their Personality

His only barrier in Squid Game would be if he was forced to play against Princess Carolyn in the game as Judah displays a sacrificial level of love for Princess Carolyn. His selfless attention to his partner’s needs often means prioritizing them over his own, like giving up his own 15% partner salary to save Princess Carolyn’s business. This loyalty would force him to withdraw from the game or sacrifice himself for her benefit.

Princess Carolyn is easily the hardest worker in Bojack Horseman. While she occasionally claims to desire a simple life, she never backs down from a challenge and never falters even when she struggles with the toughest obstacles. At every turn, she proves herself capable, witty, and intelligent.

While she frequently acts organizes and takes care of other characters, Princess Carolyn can be cold and single-minded especially after enough after years of dealing with Bojack’s inconsiderate nature and her own tragic experiences from youth to harden her resolve. She would be able to separate herself from her emotional ties when needed to in Squid Game. The only thing that could outdo this unmatched work ethic is sheer dumb luck.

The top spot may seem an odd choice for the laid-back slacker. But what makes Todd a winner is how lucky and well-liked he is. Through this luck alone, Todd lands himself multiple impressive jobs, including two CEO positions, and the adoration of Kelsey Jannings – the cold, hard-to-please director. Todd’s luck is also emphasized his relationship with his stepdad, Jorge. Jorge wants Todd to be the diligent intellectual equipped to survive the harshness of life that he always had to be. But, Jorge learns Todd has the luxury of being successful in his happy-go-lucky disposition due to white privilege that Jorge was never afforded.

Squid Game demonstrates that it is not effort, resilience, strength, or brains that wins the game, but the average Seong Gi-Hun. This reflects Squid Game’s thesis: Within the brutality of a capitalist system, merit does not equal success.

Next: The Office Characters and their BoJack Horseman Counterparts


Next
Every Bond Girl, Ranked Worst To Best

Eleanor Othieno is a Script Editor in training and joint honors graduate of English, Journalism, and Creative Writing. She currently writes for Screen Rant, Old Time Review, and No White Saviors. On an average day, you can find Eleanor pouring over scripts, books, or painting.