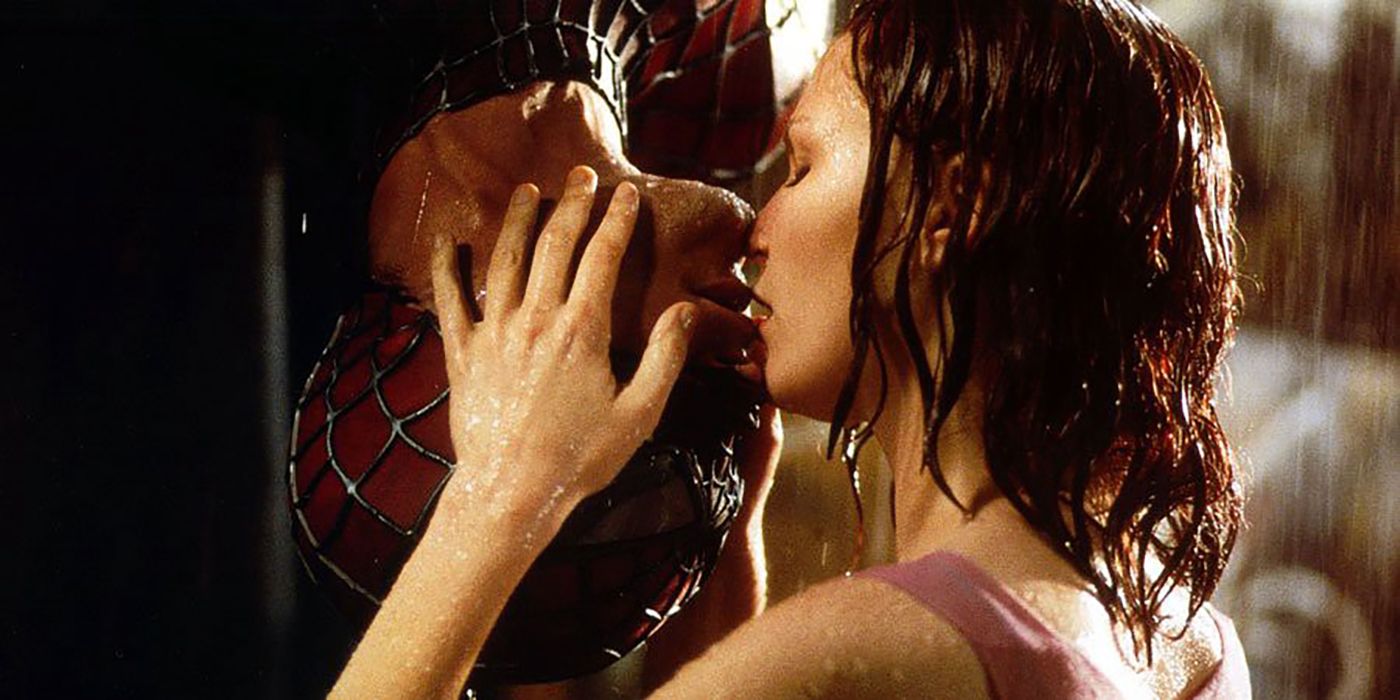 Kristen Dunst says she’s proud of her iconic upside-down kiss with Tobey Maguire in director Sam Raimi’s Spider-Man. Dunst played Peter Parker’s love interest, Mary Jane, in all three installments of Raimi’s Spider-Man trilogy from 2002 to 2007. Since Spider-Man 3, Sony has rebooted the live-action franchise twice. The first reboot saw Andrew Garfield’s webslinger fall in love with Emma Stone’s Gwen Stacey in 2012’s The Amazing Spider-Man and the second had Tom Holland befriend Zendaya’s MJ. While the latter two relationships have rivaled that of Maguire and Dunst’s characters, no moment will likely ever come close to the first film’s famous smooch.

The original Spider-Man is full of memorable moments, but the upside-down kiss is easily its most iconic for reasons including the fact that Maguire nearly drowned filming it. In the scene, Dunst’s MJ pulls down the mask of Maguire’s Spider-Man and kisses him in the ran as he hangs upside down after saving her from a group of muggers. Now, Spider-Man’s kiss ranks among the best onscreen make-out sessions of all time. It has become so irrevocably tied to Spider-Man, superhero cinema, and pop culture that it’s been referenced in everything from to The O.C. to Spider-Man: Into the Spider-Verse. Holland has even said the kiss is the one past Spider-Man scene he’d like to recreate.

Related: What Kirsten Dunst Has Done Since Playing MJ In Spider-Man

In a recent interview with W Magazine, Dunst spoke about the legacy of her 20-year-old kissing scene with Maguire in Spider-Man. The actress revealed that she did not feel like it was a famous nighttime kiss while filming it, especially considering water kept getting up Maguire’s nose, making it hard to breathe. Still, in retrospect, she’s proud to have been a part of it. Read what Dunst had to say below:

“But the way it was presented to me, [Sam Raimi] gave me this book of famous kisses, so that made me realize how romantic and special Sam wanted this to be … Even though it wasn’t necessarily feeling that way with Tobey hanging upside down … I’m proud to be a part of that. It looked like a great kiss.”

Dunst went on to talk about how the decision to be a part of Raimi’s first Marvel film was “not at all” a big one, saying she “just knew that Sam was going to do something special” — from his indie/cult classic background to casting Maguire and Willem Dafoe. There’s no denying the influence Raimi’s Spider-Man trilogy has had on the Marvel Cinematic Universe. Regarding Spidey cinema, the recent release of Spider-Man: No Way Home marks on high-point for the franchise. The film connected three generations of Spider-Man movies by featuring returning Sony characters like Dafoe’s Green Goblin, Alfred Molina’s Doc Ock, Jamie Foxx’s Electro and, of course, Maguire and Garfield’s Spider-Men.

The suspected inclusion of past Spideys led to rampant speculation that their respective love interests, MJ and Gwen, would join them in the latest Spider-Man film. While this may have been considered by the writers early on, it turned out to not be the case. However, Spider-Man: No Way Home has more than renewed interest in past Spider-Man films, and Dunst has said she’d be up to reprise her legacy role in a future film. As for Raimi, the director is making his MCU debut with the upcoming Doctor Strange in the Multiverse of Madness. If that film lives up to its title, anything can happen. So, why not a subtle (or not so subtle) reference to the upside-down kiss that started it all?

Josh Plainse is a writer, movie, and television fanatic based out of Wisconsin. Josh works for Screen Rant covering the latest in entertainment while simultaneously pursuing the never-ending dream of becoming an established novelist, screenwriter, and/or decent human being. Josh would accredit characters such as Goku, Han Solo, Simba, and Maximus Decimus Meridius for instilling within him an affinity for storytelling. It is this incessant obsession which has propelled him to seek opportunities that inform, entertain, and inspire others.