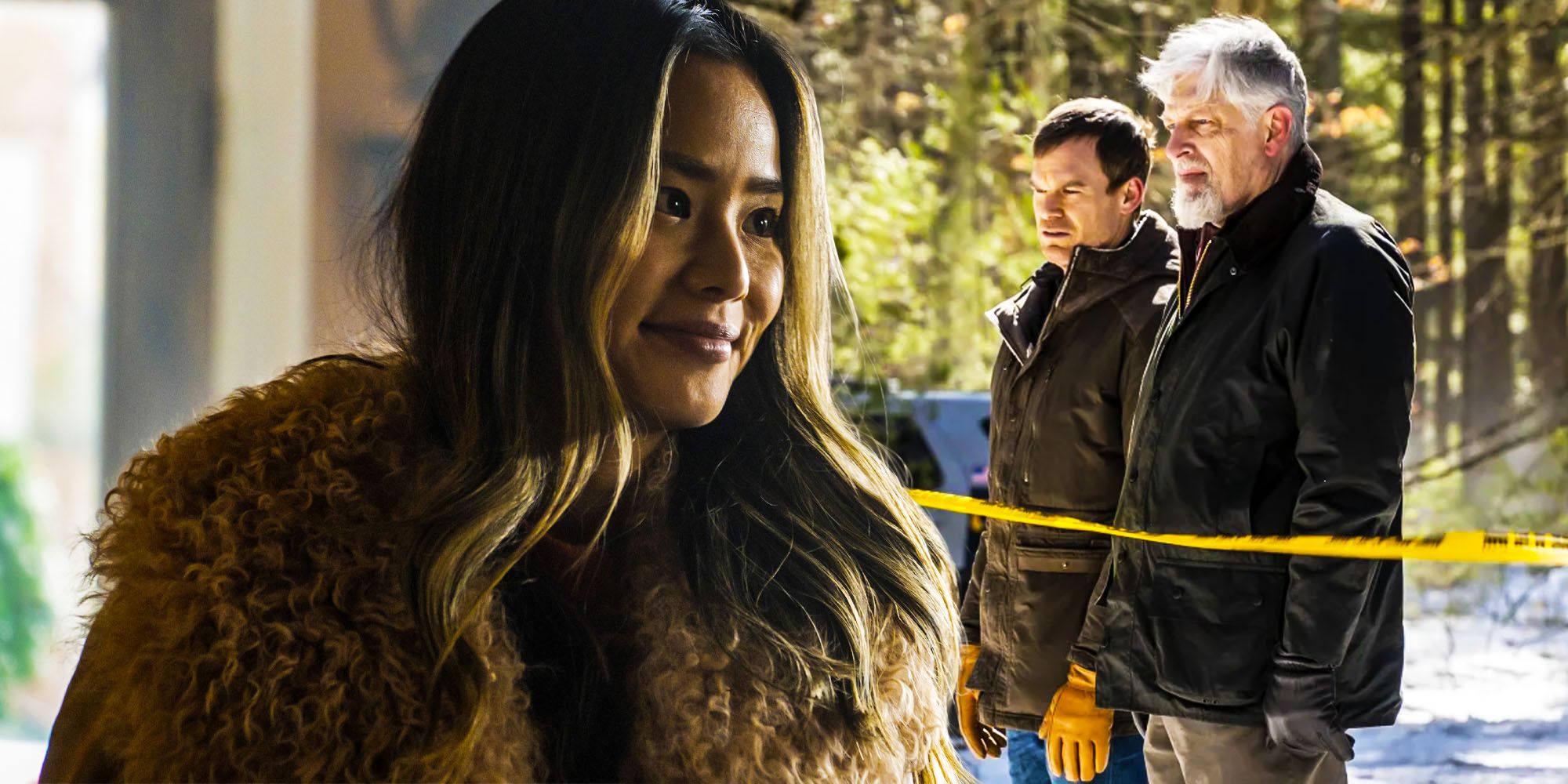 In Dexter: New Blood, episode 3 “Smoke Signals,” the show gives the audience the first shots of the serial killer in action and hints at vital clues to the killer’s identity. The first two episodes of Dexter: New Blood focused on establishing the town of Iron Lake, making Dexter kill again, and showing Harrison’s return. While episode 3 continues to deal with these issues it also begins to move the focus on to the question of who the series’ antagonist is.

In Dexter: New Blood, episode 1 “Cold Snap,” the audience meets Lily (Kimmy Anne Dunn) and a pattern of young women disappearing is teased. In episode 3 the serial killer is shown to have Lily held captive and under surveillance. After seeming to come to a decision, the killer dons hunting gear, puts on some music, and releases Lily. As she runs away from the building and out across the snow, the killer guns her down and later washes her body and drains it of blood.

While the serial killer’s face is never shown, either through careful camera angles or because it is covered in a balaclava, the scene gives many hints to his identity. It is traditional for Dexter to have part of the series be about the mystery of who the antagonist is and part of it be about how Dexter kills them and gets away with it and it seems that Dexter: New Blood will follow that same trajectory. Here is all the evidence that episode 3 gives to the identity of the serial killer.

Although Dexter: New Blood episode 3 is careful not to show the audience too much of the serial killer’s body, even through hunting gear certain elements can be discerned. The killer appears to be a fairly well-built man based on his torso, and his hands show that he is relatively old. His voice as he sings along to the song that he is playing on the turntable supports this as he sounds relatively gruff.

Dexter: New Blood doesn’t shy away from showing the audience the serial killer’s eyes in detail through the balaclava. The skin around the killer’s eyes supports the previous assessment of an older man as the skin is wrinkled and folded. The eyes themselves are blue. Assuming that the killer is one of the characters that has already been introduced then this description fits two individuals: Kurt Caldwell (Clancy Brown) and Edward Olsen (Fredric Lehne).

The Serial Killer Is A Hunter

The serial killer’s MO suggests a lot about the type of person that the killer is in Dexter: New Blood. He is clearly a hunter by nature as he puts on full hunting gear for his kill and releases Lily so she can be hunted rather than entering her room to simply kill her. This leans into a trope of rich hunters becoming bored with traditional game and wanting to hunt humans and the critique of the super-rich could still easily apply to either Caldwell or Olsen.

Related to this is the fact that the serial killer also drains the blood of his victims and saves it in buckets. This provides an echo of the original Dexter season 1 antagonist, the Ice Truck Killer, who saved the blood to create a harrowing scene for Dexter. Given the hunting allusions in the Dexter: New Blood scene, it could be thought that the killer is draining the bodies to the butcher and eating them. However, he is seen injecting them with the preservative formaldehyde suggesting that he is either burying the bodies or else has some other plan that he needs them to remain intact for.

The Serial Killer In New Blood Has A Remote Cabin

When the serial killer guns down Lily after a myriad of clues have already been teased about their identity, some more clues are given to the serial killer’s location. Lily has been kept in the basement of a remote hunting cabin that is next to a wide expanse of open snow and is far enough from Iron Lake that Dexter can hear the shot when he is in the woods out near the Native American land and the highway. While this is clearly not the mansions of Caldwell or Olsen, either one of them could easily afford a second location and potentially have their names kept off the property listings. Caldwell was seen shortly before the murder took place drinking in his own home while on the phone with Angela. It is possible that this implies he is not the killer, but it could just as easily be intended to represent the catalyst for him deciding to finally kill Lily.

While all of the previous clues can easily point to either Kurt Caldwell or Edward Olsen, the music that plays throughout Dexter: New Blood‘s killer episode 3 highly suggests that Olsen is the man behind the mask. While the Dexter: New Blood soundtrack is extensive, three songs in the episode are distinctive for all being from the late-1950s to early-1960s. The first of these is played on a 7” vinyl by the killer as he prepares to kill Lily. The second plays as the killer cleans and drains her body. The third and final song can be heard faintly playing from Olsen’s car when he stops and offers Audrey Bishop (Johnny Sequoyah) help. If this motif was purely intended as a red herring then it is ultimately an odd choice.

As well as pointing the blame for the Dexter: New Blood killings at Edward Olsen, the music also suggests his intention and motive. The song that he listens to when he is preparing to kill Lily, Del Shannon’s “Runaway” from 1961 tells the story of a man whose girlfriend has left him. Based on the age of the song and the focus on young women, it is likely that the killer is targeting people that are similar to the love that left him in his youth. When combined with the formaldehyde, there is a possibility that the killer is preserving the bodies of the women to fill in for his long-absent girlfriend. A gruesome idea that draws on Hitchcock’s Psycho, but on par with previous plotlines that Dexter has explored.

Next: Every Song In Dexter: New Blood (So Far)

Welcome To Plathville: Why Some Fans Have Doubts About Max Kallschmidt
Related Topics

Faefyx Collington (They/Them) is a freelance features writer for Screen Rant. They’re a British writer of both fiction and non-fiction, focussing on science fiction, fantasy, and mystery for the former and on culture, gender, and current affairs for the latter.
Never content to settle to one thing, Faefyx is also a co-host and producer of the podcast and video series “Unramblings,” and can occasionally be found making music around the internet as well.
Having acquired degrees on both sides of the Atlantic, Fyx has settled (for the moment) in the southern United States where they live with their spouse and an entirely appropriate number of cats.

Zendaya Reveals “Big Sister” Bond With Hunter Schafer as Actresses Reflect on Euphoria Season 2
Book Riot’s Deals of the Day for December 3, 2021
Kaley Cuoco Reflects on Difficult Birthday 3 Months After Karl Cook Split
‘Scream’ Featurette Reminds Us That Anyone Can Be Under Ghostface’s Mask; Character Posters Profile the Suspects! [Video]
15 Secrets About Mean Girls That Are Totally Grool