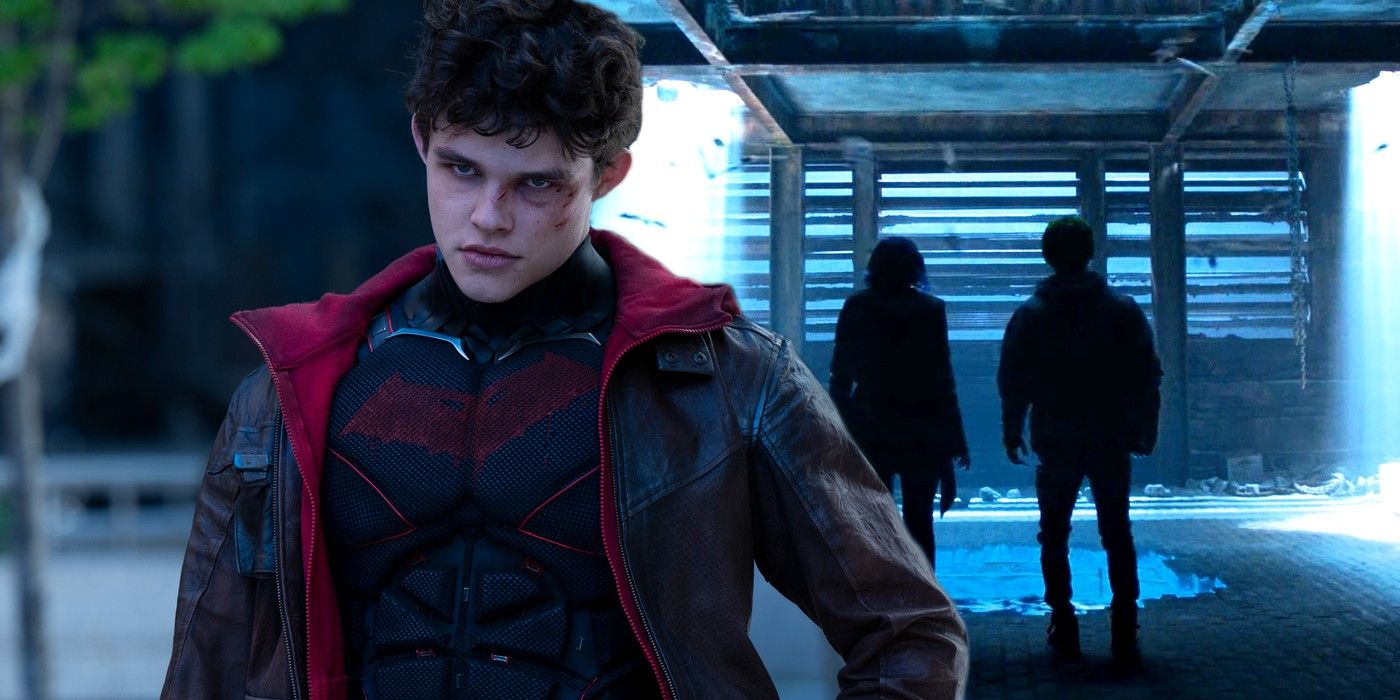 Titans season 3 just revealed the true reason Jason Todd broke bad and made the switch from Robin to Red Hood. With Blackfire, Scarecrow, Lady Vic, and even Gizmo, Titans season 3 boasts many a vicious villain, but none are more thrilling than Red Hood. Adapting DC’s “Death in the Family” comic arc, Jason is brutally killed at the hands of Joker, only to resurrect under the more violent Red Hood moniker. Unlike the source material, however, Titans‘ Red Hood has been portrayed as an outright villain. He killed Hank, all but destroyed the Titans, and has terrorized the good citizens of Gotham with devilish explosive implants.

Jason’s journey to the dark side seemed like the result of multiple influences coming together. Bruce Wayne’s second Robin was still suffering intense trauma following his brush with Deathstroke in Titans season 2, and Batman worsened things by abruptly relieving Jason of his sidekick duties. Scarecrow then took advantage of Jason’s vulnerable mindset by filling his father-figure void and pumping the struggling Robin with anti-fear drugs. Watching Titans season 3 up until episode 12, Scarecrow appears to be the driving factor in Jason Todd’s Red Hood transformation. The season’s penultimate episode, “Prodigal,” proves otherwise.

Thanks to Nightwing’s untimely demise, Titans season 3’s “Prodigal” finally reveals what happens to someone when they’re tossed into a Lazarus pit. Before he can resurrect, Dick Grayson faces nightmarish visions of his worst fears – an apparition of Jonathan Crane (arrogance intact), himself as Joker beating up Jason Todd, and memories from his extensive catalog of past failures. If that’s the kind of hellish revival someone as mentally balanced (for Titans) as Dick Grayson goes through, Jason Todd’s Lazarus pit experience must’ve been significantly worse. At the time Jason died, he was racked with self-doubt, disturbing dreams, hate-filled impulses, and a lack of identity. Titans hasn’t revealed precisely what Jason Todd witnessed during his Lazarus bath, but the harrowing hallucinations could’ve easily tipped him toward donning the Red Hood mask.

In hindsight, the Lazarus pit causing Jason Todd’s Red Hood transformation makes far more sense than Scarecrow’s psychological manipulation or Bruce Wayne’s fatherly failings. Before getting himself murdered by Joker, Jason was certainly on the road to villainy, but hadn’t done anything truly irredeemable. He’d liaised with Scarecrow in Arkham and started cooking drugs, but the violence against civilians and despicable antics only began after Jason’s dip in the Lazarus pit. Dick Grayson all but confirms it was dying and coming back to life that turned Robin rotten when they reunite in the final act of Titans season 3‘s “Prodigal.” Jason asks his predecessor why they’re working together, and Dick replies, “because now I know what it’s like to die.”

Blaming Jason’s villainy on the unpleasant process of death and resurrection makes his Titans redemption much easier. Had Red Hood simply been a product of Jason’s anger and ego, molded by a Gotham City supervillain that he approached first, Titans would have a tough time reforming Jason Todd into anything resembling a hero. Because only those who have endured the full Lazarus pit experience can appreciate Jason’s torment, however, audiences should take more kindly to Red Hood becoming an antihero of the Titans universe.

Craig first began contributing to Screen Rant in 2016, several years after graduating college, and has been ranting ever since, mostly to himself in a darkened room. Having previously written for various sports and music outlets, Craig’s interest soon turned to TV and film, where a steady upbringing of science fiction and comic books finally came into its own.
Craig has previously been published on sites such as Den of Geek, and after many coffee-drenched hours hunched over a laptop, part-time evening work eventually turned into a full-time career covering everything from the zombie apocalypse to the Starship Enterprise via the TARDIS.

Since joining the Screen Rant fold, Craig has been involved in breaking news stories and mildly controversial ranking lists, but now works predominantly as a features writer.
Jim Carrey is Craig’s top acting pick and favorite topics include superheroes, anime and the unrecognized genius of the High School Musical trilogy.

Book Riot’s Deals of the Day for October 21, 2021
Breaking Down Each Episode of Gwyneth Paltrow’s Sex, Love and goop
Get the First Look at the Skims x Fendi Collection (A.K.A. the Collaboration of the Decade)
Sadiq Khan urged to remove Pride in London’s entire board and start inquiry into racism claims
10 Hidden Gems in Spanx’s Sale Section