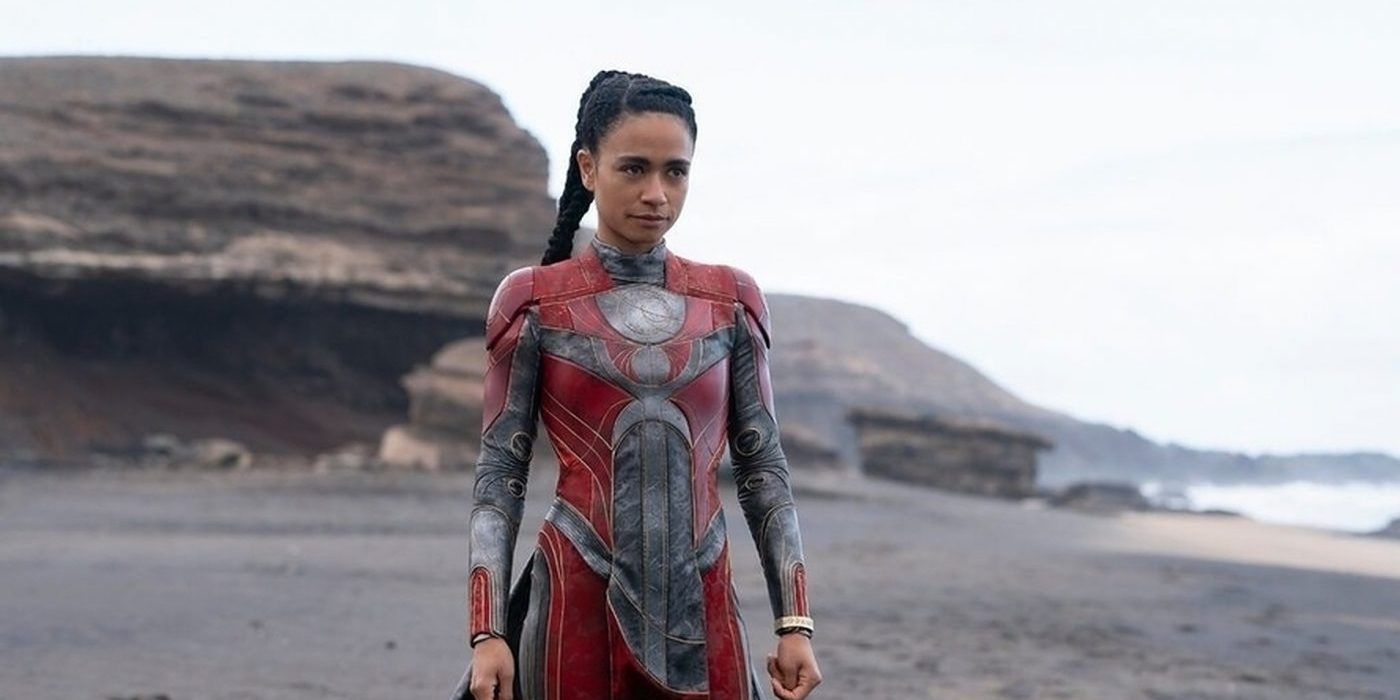 Lauren Ridloff recently recalled how Angelina Jolie helped her film difficult scenes for director Chloé Zhao’s Eternals. Marvel Studios is making major strides towards improving representation within the Marvel Cinematic Universe. This year saw founding female Avenger Natasha Romanoff finally get her own solo film, Black Widow, and brought audiences their first Asian superhero in Shang-Chi and the Legend of the Ten Rings. Now, The Walking Dead’s Ridloff is gearing up to debut as the franchise’s first deaf hero in Eternals—which is set to release exclusively in theaters on November 5.

Eternals follows its titular group of immortals who were created by the Celestials and sent to Earth thousands of years ago to protect humanity from their evil counterparts, Deviants, and only Deviants. The Eternals are instructed to not interfere in any other conflicts, including Thanos (although this is subject to change). Ridloff plays Makkari, the fastest Eternal whose abilities were briefly put on display in the trailers. In addition to Ridloff, Eternals features a star-studded cast including Gemma Chan, Kumail Nanjiani, Richard Madden, Don Lee, Barry Keoghan, Lia McHugh, Brian Tyree Henry, Salma Hayek, Kit Harrington, and Angelina Jolie.

Related: The Most Powerful Avengers 5 Lineup Possible (Based On Phase 4)

In an interview with The New York Times (via Uproxx), Ridloff expressed her excitement for Eternals and opened up about her experience playing Makkari in the upcoming MCU film, sharing a story about how Jolie helped her film some of her most difficult scenes. The actress also shared how she initially felt she had to apologize for her needs on set but soon realized that everyone has their own unique set of challenges. Therefore, she made a point to stop apologizing for being deaf. She went on to talk about how the industry and movie theaters can be more accessible to people who are deaf while recalling Jolie’s helpful suggestion for her tough scenes. Read what Ridloff had to say below:

“In some scenes, I had to face a wall. As a deaf person, how do you cue me? At one point, I was sharing my frustration with Angie — Angelina Jolie — at a holiday party after a day of shooting. And she immediately made a suggestion, ‘why don’t we use a laser pen that special effects can easily erase?’ It was an ‘Aha, wow’ moment. Whenever I’m looking at a wall, the interpreters would use a laser pen to make a circle on the wall — ‘rolling, rolling, rolling’ — and once it went away that meant, ‘Action!’”

Ridloff also spoke on how her MCU role paves the way for her two deaf sons to “grow up in a world where there are superheroes who are deaf, [allowing them to] dream a bit more wildly.” With comic book movies/television shows and, in turn, Marvel projects, dominating the pop culture lexicon, it’s important to include as many exciting and diverse characters as possible. Opportunities for better representation need to be taken advantage of. That being said, Eternals’ will also feature Brian Tyree Henry as the MCU first gay superhero, Phastos.

Ridloff won’t be the only one representing her community in the MCU. Alaqua Cox is also set to play the deaf superhero, Maya Lopez/Echo in Disney+’s Hawkeye, which will focus on Jeremy Renner’s Clint Barton as he passes his mantle to Kate Bishop (Haile Steinfeld). Both actresses have obviously overcome a plethora of obstacles to get where they are, and audiences are sure to see much more of them moving forward. Cox already has an Echo spin-off in development and Ridloff’s Makkari and the rest of the Eternals will likely play a major role in irrevocably changing what audiences think they know about the MCU.

Josh Plainse is an author, journalist, avid reader, movie and television fanatic based out of Wisconsin. After graduating from the University of Wisconsin Oshkosh with a BA in English, he embarked on a career as a freelance writer, providing content for a number of different websites, including Bookstr.com, Mandatory.com, and Comingsoon.net. Josh works for Screen Rant covering the latest in entertainment while simultaneously pursuing the never-ending dream of becoming an established novelist and screenwriter.

Josh would accredit characters such Goku, Han Solo, Simba, and Maximus Decimus Meridius for not only teaching him how to be a man but instilling within him an affinity for storytelling. It is this incessant obsession which has propelled him to seek opportunities that inform, entertain, and inspire others. Beyond that, he enjoys the occasional Spotted Cow (shout-out to New Glarus Brewing Company), doing push-ups, and wearing jean jackets on Tatooine.