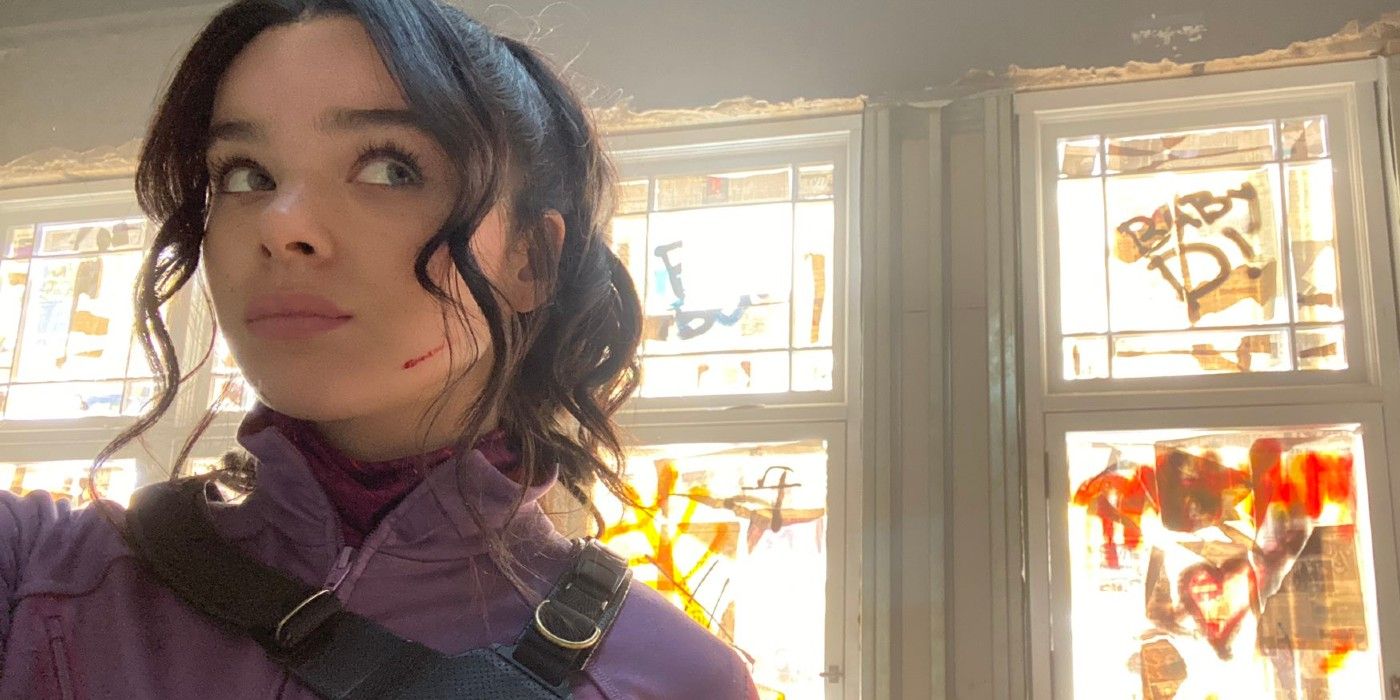 Hailee Steinfeld reveals a new BTS image of Kate Bishop from the Disney+ series Hawkeye. Steinfeld was the early fan favorite pick for the role of Kate Bishop, the Young Avenger from the comics who takes on the mantle of Hawkeye in the wake of Clint Barton’s death. Kate was confirmed to make her MCU debut in Hawkeye when it was officially announced in 2019, and though rumors about the status of Steinfeld’s casting shifted back and forth for some time, the start of production last year confirmed she is the MCU’s Kate.

Hawkeye will give Jeremy Renner’s Clint his first ever solo project. Picking up after the events of Avengers: Endgame, the series will explore his origins and see him meeting Kate, though the specifics of the plot get murky after that. Hawkeye will premiere in November and run for a total of 6 episodes; in addition to furthering Clint and Kate’s stories, it will pick up with the tease from the Black Widow end-credits scene, which saw Yelena Belova (Florence Pugh) accept a job to take out Clint.

Monday marks the premiere of the first Hawkeye trailer, and before it even arrived, its cast members were feeling excited. Steinfeld posted a new behind the scenes picture of her as Kate, offering one of the best peeks yet at her costume. Between the purple suit and the dash of blood on her face, Steinfeld definitely looks the part. Check it out below.

Steinfeld’s debut as Kate Bishop is perhaps the most buzzworthy part of Hawkeye, as many fans have been waiting a long time for her to arrive in the MCU. There was even a time when people speculated that she was in Avengers: Endgame, though the girl from the trailer they believed to be her was in fact Clint’s daughter Lila. Now that Kate’s MCU arrival is imminent, excitement is bound to reach a fever pitch. The new Hawkeye footage is only likely to increase anticipation even more.

Kate is all but guaranteed to return for future MCU projects beyond Hawkeye, but where she will go next remains to be seen. Unsurprisingly, Marvel is choosing to remain tight-lipped about her path forward, though the series itself could provide some major clues. All signs so far point to Marvel gearing up for a Young Avengers project, which would be a great showcase for Steinfeld’s Kate. Right now, everything is speculation, but fans should expect some updates in the coming months.

Rachel LaBonte is a news, feature, and movie review writer for Screen Rant with a deep passion for film and television. A graduate of Emerson College, she majored in Media Arts Production while specializing in screenwriting. She’s been a writer ever since high school when she realized she was rather good at it and joined as many entertainment news clubs as she could while in school. Most notably, she wrote for Emerson’s website Emertainment Monthly, and one of her film reviews won an Evvy (Emerson’s student awards) for Best Review. Her deep love of movies led to her working at a movie theater for five years, which she loved despite the angry customers. An avid reader who constantly buys books before reading the ones she already owns, Rachel is a huge fan of superheroes (especially of the Marvel variety) and wizards and will likely never be able to catch up on all the movies/TV shows she longs to watch.

It’s Getting Hot in Here! Prepare to Swoon Over Bridgerton and TV’s Steamiest Shows
6 Marvel Characters Ryan Gosling Would Be Perfect To Play
Buffy the Vampire star Nicholas Brendon suffering ‘paralysis in his genitals and legs’
What If Mid-Season Trailer Sets Up Guardians of the Multiverse
You Won’t “Disengage” With This Real Housewives of Salt Lake City Gift Guide