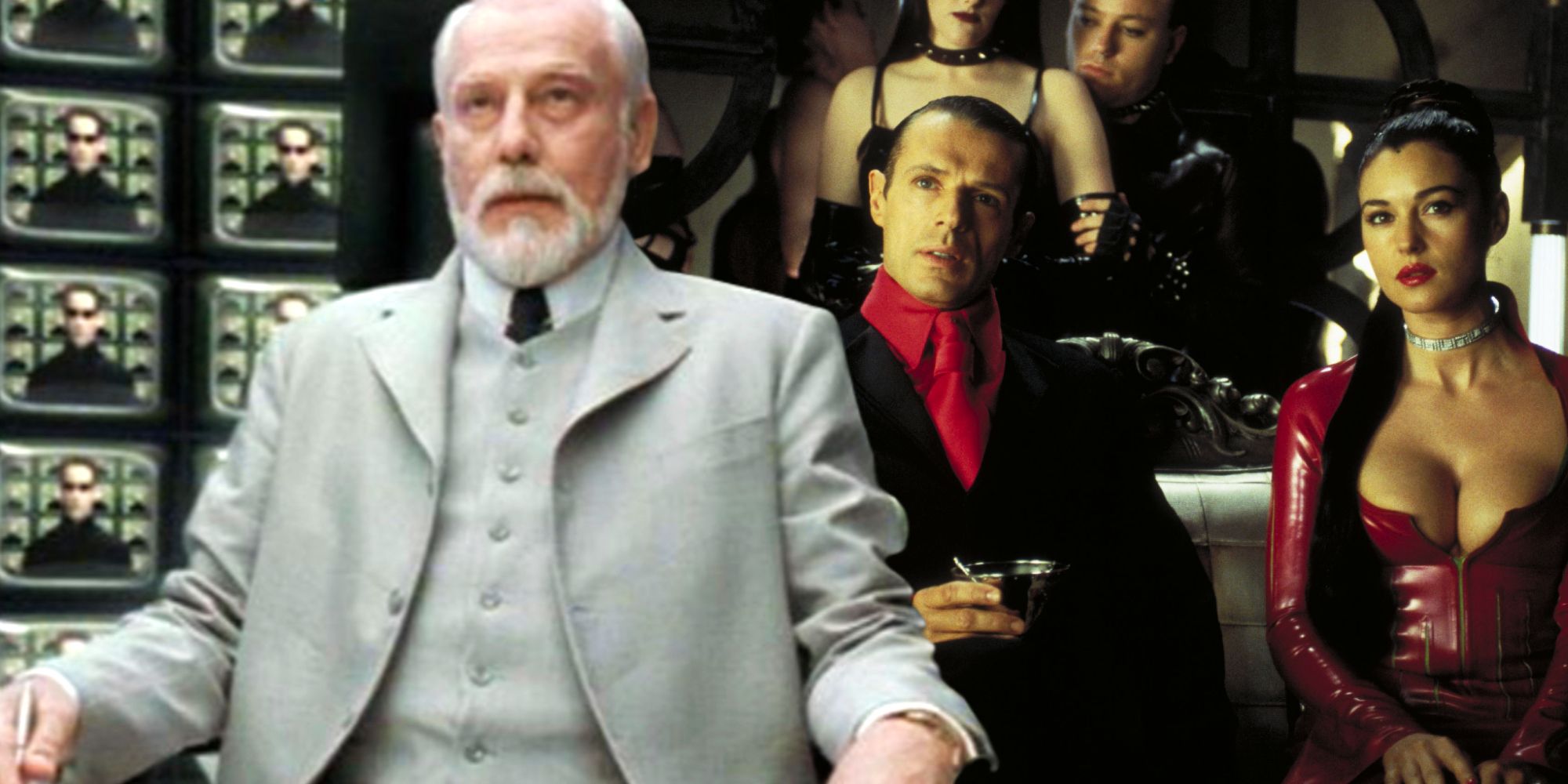 Every entry in The Matrix trilogy features programs, which can generally be understood as a precise sequence of instructions that enables a computer system to perform a set of functions. Programs in the world of the Matrix come in various forms, including artificial environments, such as the dojo in which Morpheus and Neo fought as a part of their sparring program. Programs can also function in the form of inanimate objects, while others can be sentient Machine entities who assume a human form.

It is interesting to note that a redpill like Neo is able to harness his abilities due to a unique bit of programming, as the prophecy of the One is essentially a system of control to ensure the stability of the Matrix. As with programs that are designed with sentience, some of them have the ability to experience emotions like humans, such as Sati, who can manipulate sunrises as a part of her abilities. On the other hand, there are programs like Agent Smith who can enter the real world by injecting their consciousness into a machine body.

Being a program within the simulated world of the Matrix can be a complex affair, as different programs are set to carry out divergent functions, which are often at loggerheads with one another. With the much-anticipated release of The Matrix 4 later this year, it will be interesting to witness the introduction of never-seen-before programs, and the role they will potentially play within the narrative. Here’s every sentient program seen in The Matrix movies so far.

The Oracle plays a seminal role in catalyzing the events of The Matrix movies, especially in terms of Neo’s journey in embracing the role of the One. The Oracle is an intuitive program with a keen insight into the nuances of human psychology, which essentially grants her the gift of clairvoyance. Initially created for interpreting key aspects of the human psyche and fashioning a stable version of the Matrix, the Oracle went into exile and aided the Resistance throughout the duration of the Machine War. With the aid of her prophecies, The Oracle, as with Neo and Morpheus, is able to align certain humans with their destinies. With her guidance, Morpheus and Neo essentially brought about the emancipation of humans together. The Oracle is portrayed by Gloria Foster in the first two films, and then by Mary Alice in Revolutions.

The Architect was designed as a highly specialized program of the Machine world, who essentially created the simulated reality of the Matrix. While the Architect is a singular entity, he appears more as a representation of the entire Machine mainframe and their covert machinations. During his attempt to better understand human nature, the Architect ended up crafting the first Matrix as a utopia, but this version was inevitably rejected by humanity due to its chaos-averse nature. Adopting a different approach, the Architect created the second Matrix along the lines of a nightmarish hellscape, but this version crashed due to an overwhelming lack of hope. Interestingly, in the movies, the Architect’s appearance is a possible homage to Sigmund Freud, and the scene in which he encounters Neo closely mirrors the Patriots contacting Raiden in Metal Gear Solid 2: Sons of Liberty. The Architect is played by Helmut Bakaitis in the movies.

Played by martial arts actor Collin Chou, Seraph is known to originate within the Matrix with the explicit function of working for the Merovingian. At some point, the Oracle approached him and asked him to protect her, which essentially was interpreted as an act of betrayal by the Merovingian. Seraph also functions as a gatekeeper of sorts, barring entry to high-priority programs such as the Oracle herself, as evidenced in the breathtaking fight sequence between him and Neo before the former is allowed to visit her. After Neo is released from Mobil Avenue, Seraph was asked to look after Sati, another sentient program, but both of them are ambushed by Agent Smith, who now functions as a virus within the Matrix. Although both programs are assimilated by Smith, they are set free after the peace treaty and the reloading of the Matrix.

Also referred to as The Frenchman, The Merovingian is an old, powerful program who is deemed as a “trafficker of information.” Functioning not unlike the leader of an organized crime syndicate, The Merovingian, along with his wife, Persephone, operate a smuggling ring that functions as a safe house for exiled programs within the Matrix. While not much is known about The Merovingian’s origins, it is known that he prefers to speak in French and live out an opulent existence, whilst harboring the ambition to replace the function of the Oracle. While the Merovingian is known to navigate the constantly shifting alliances in the Machine world, it has been heavily implied that he has frequently encountered and fought various versions of the One before meeting Neo. In the films, this character is portrayed by Lambert Wilson, who is also set to return The Merovingian in The Matrix 4 as a potential antagonist.

Agents are sentient programs who can move in and out of any software hardwired to the system, making every potentially individual still in the Matrix an agent. Their primary function within the Matrix is to grant security and ensure the eradication of rogue elements within the simulation, who could potentially expose the true nature of the fabricated world. Agents often assume the role of hunting down specific individuals and eliminating them and are almost always functional in groups of three. As opposed to the humans inside the Matrix, Agents possess superhuman strength and agility, with most of them being masters at hand-to-hand combat and residual self-image (RSI) manipulation. The ability to override an individual’s RSI allowed agents to assume the shell of any human within the Matrix. Interestingly, agents are also able to directly communicate with the Sentinels.

Functioning as the primary antagonist in The Matrix trilogy, Agent Smith became an exile program after being initially destroyed by Neo. Manifesting later as a computer virus or anomaly, Agent Smith demonstrated the incredible ability to assimilate bluepills, redpills, and programs alike, which essentially destabilized the very fabric of both the Matrix and the real world. One of the primary reasons why Smith emerges as a formidable nemesis for Neo is the dialectical opposition of their respective characters, While Neo embodies the sheer unpredictability of human nature, enriched by emotions and the power of choice, Agent Smith is a being molded by concepts of finality, conformity, and single-minded inevitability. This is supported by the Oracle’s assessment of Smith as the sheer opposite of Neo, deeming him as his “negative.” Agent Smith is played by Hugo Weaving in the movies.

The Keymaker, played by Randall Duk Kim, was a program created to open up the door to the Source for The One. In the sixth rendition of the Matrix, the Keymaker was kept prisoner in the Chateau of the Merovingian, who was later freed by Morpheus and the others with the aid of Persephone. Unfortunately, he is shot just outside the door to the Source by the Smiths, but he made sure to point Neo in the right direction before his death. As per The Matrix lore, the death of the Keymaker triggered the possession of the keys by an exile program named Landlord, whose brother, Boxmaker, unleashed powerful exiles later into the Matrix, dubbed Pandora’s Box.

RELATED: The Matrix 4 Theory: Morpheus Returns As The Movie’s Villain

The Twins of The Matrix originated during the Machines’ second attempt at creating a stable Matrix, who later went on to become the Merovingian’s henchmen. While it is unclear as to why the Twins became exile programs, it is heavily hinted that they are severely disliked by the Agents in particular, who are seen attacking them viciously during the freeway chase in The Matrix Reloaded. The Twins are skilled martial artists with an innate ability to best anyone in close combat and are also able to wield a knife. They also have the ability to take a non-corporeal form, which allows them to pass through solid matter, avoid gunfire, and survive explosions. While it is unknown whether the Twins are two separate entities or copies of the same entity, they refer to themselves as “we” as opposed to their individual selves. The Twins were played by brothers Neil and Adrian Rayment in the films.

Played by Monica Bellucci, Persephone is the wife of the Merovingian, often seeking the company of the patrons at the Le Vrai restaurant. Coming into existence sometime during the creation of the first Matrix, Persephone evaded deletion and became an exile program along with the Merovingian. When Neo, Morpheus, and Trinity arrive at the restaurant for the Keymaker, Persephone betrays her husband and offers to help in exchange for a passionate kiss from Neo. Despite her betrayal, Persephone and the Merovingian are seen together in Club Hel, although what happened to her after Smith’s assimilation arc remains unknown.

Played by Bernard White, Rama Kandra is a program seen at Mobil Avenue Station in the world of The Matrix, wherein he encounters Neo. His wife, Kamala, played by Tharini Mudaliar, is a software program, and the two wish to protect their daughter, Sati. Neo is surprised by the sheer emotion displayed by Rama, whose parental instincts are akin to genuine human sentiments. Sati, as played by Tanveer K. Atwal, was offered protection by the Oracle, who believed that her presence would have an immense impact on both the Matrix and the real world.

NEXT: The Matrix: Every Known Potential (And Their Powers) Explained

Old: Every Disease The Characters Had (& How The Beach Affected Them)
Related Topics

Debopriyaa Dutta is a content curator, poet, and film critic based in India and a frequent contributor for High On Films. Apart from being a published author, Debopriyaa has been writing professionally since 2014, and holds a Master’s degree in English Literature and Theory from the University of Delhi. An ardent fan of cosmic horror and poetic cinema, she enjoys painting, along with reading literary works steeped in morbid nihilism.