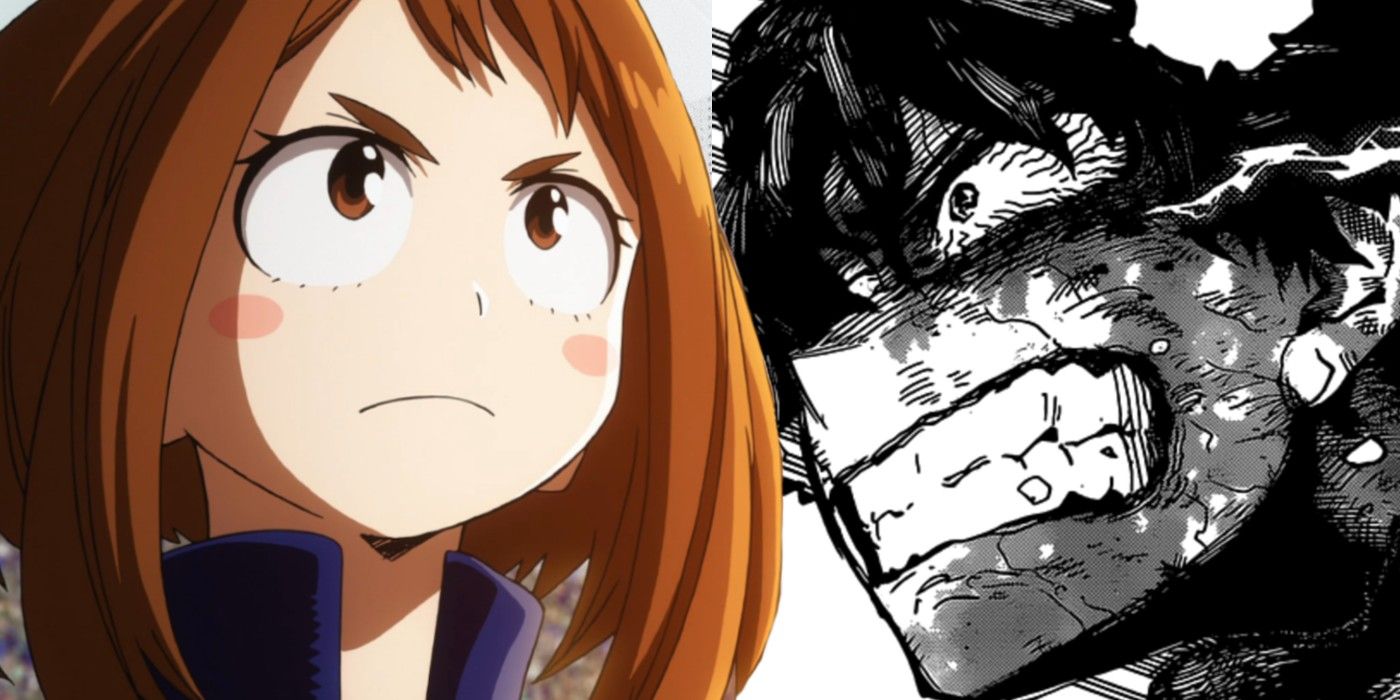 Warning! Spoilers ahead for My Hero Academia chapter 320!

Deku has been successfully taking on the entirety of class 1-A in My Hero Academia as they try to bring him home, but of all the students who can confront him, the classmate readers want to see the most is Ochaco Uraraka. She is without a doubt the best equipped of all her classmates to quell Deku’s anger, will, and drive to take on All For One by himself. And it’s not because of her Zero Gravity quirk.

After successfully convincing the number-one hero Endeavor that Deku needed help despite his assurances, the students of class 1-A learned where they could find their rogue classmate and arrived just in time to save him from the villain Dictator. But Deku still believed he needed to confront All For One alone. So they enacted the next stage of their strategy: Convince Deku to relent through sentimental pleas. And if that doesn’t work, physically restrain him. All of their attempts have failed thus far, including Bakugo Katsuki’s.

Related: My Hero Academia Is About To Expand In A Massive Way

Although there are some students who have yet to try, including Tsuyu Asui, they, too, should fail, leaving only one student left, the one classmate who should be their last hope, Ochaco Uraraka. Strictly speaking from a strategic standpoint, it’s imperative that Uraraka is given this important role just based on how flustered Deku can sometimes get around her. But for the sake of good storytelling, it’s because of how strongly he feels about her, and Uraraka clearly reciprocates these feelings as well. The two obviously share a special romantic connection, not to mention Deku and Uraraka have adorable chemistry. But since they have yet to kiss, it would be an utter travesty if the manga failed to take full advantage of this pivotal moment by making this be their first kiss. An effective and impactful scenario could involve Uraraka first imploring Deku to come back home (while attempting to subdue him with her quirk). And when all attempts inevitably fail, Uraraka could get caught in the moment and, in desperation, grab the rogue hero and kiss him for the very first time. Logically, this last-ditch effort should prove quite effective. Just based on how much her simply speaking to Deku can affect him, a kiss should throw him into a catatonic state.

But there’s an equal chance that this kiss could be devastating just as much as it could be utterly adorable. He could just outright reject her. The incredible burden that’s currently bearing down on Deku has already caused him to act in the most alarming and uncharacteristic way so nothing is out of the realm of possibility. Not too long ago, Deku proved that he could push All Might away even when the former number-one hero pleaded for him to stay. All Might was Deku’s childhood hero growing up and inspired the boy to act like a hero even when he didn’t possess a quirk. All Might inspired Deku to dream and is the reason why he’s a hero today. But all that wasn’t enough to stop him.

So if Deku is able to brush aside such a person who means so much to him, is it possible that he could do the same to Ochaco Uraraka? Hopefully not, but it would create a compelling source of conflict in future chapters of My Hero Academia if he did. But regardless of the devastating implications that this theoretical first kiss could bring, now is the perfect time for it to happen.

Next: My Hero Academia: How Deku Inherited The Quirk Black Whip

Mother whose kids were taken away because she’s queer wins long-overdue ruling
Andrew Garfield And Jessica Chastain Explain How Filming The Eyes Of Tammy Faye In The South Impacted Their Performances
Did Robyn Dixon And Juan Dixon Secretly Get Married? Their Home Deed Lists Her As “Married”
Black Adam’s Pierce Brosnan Hypes Up The Justice Society In Dwayne Johnson’s Movie
Ulta’s 21 Days Of Beauty: Get 50% Off First Aid Beauty, Keys Soulcare, Lorac, Peter Thomas Roth & More