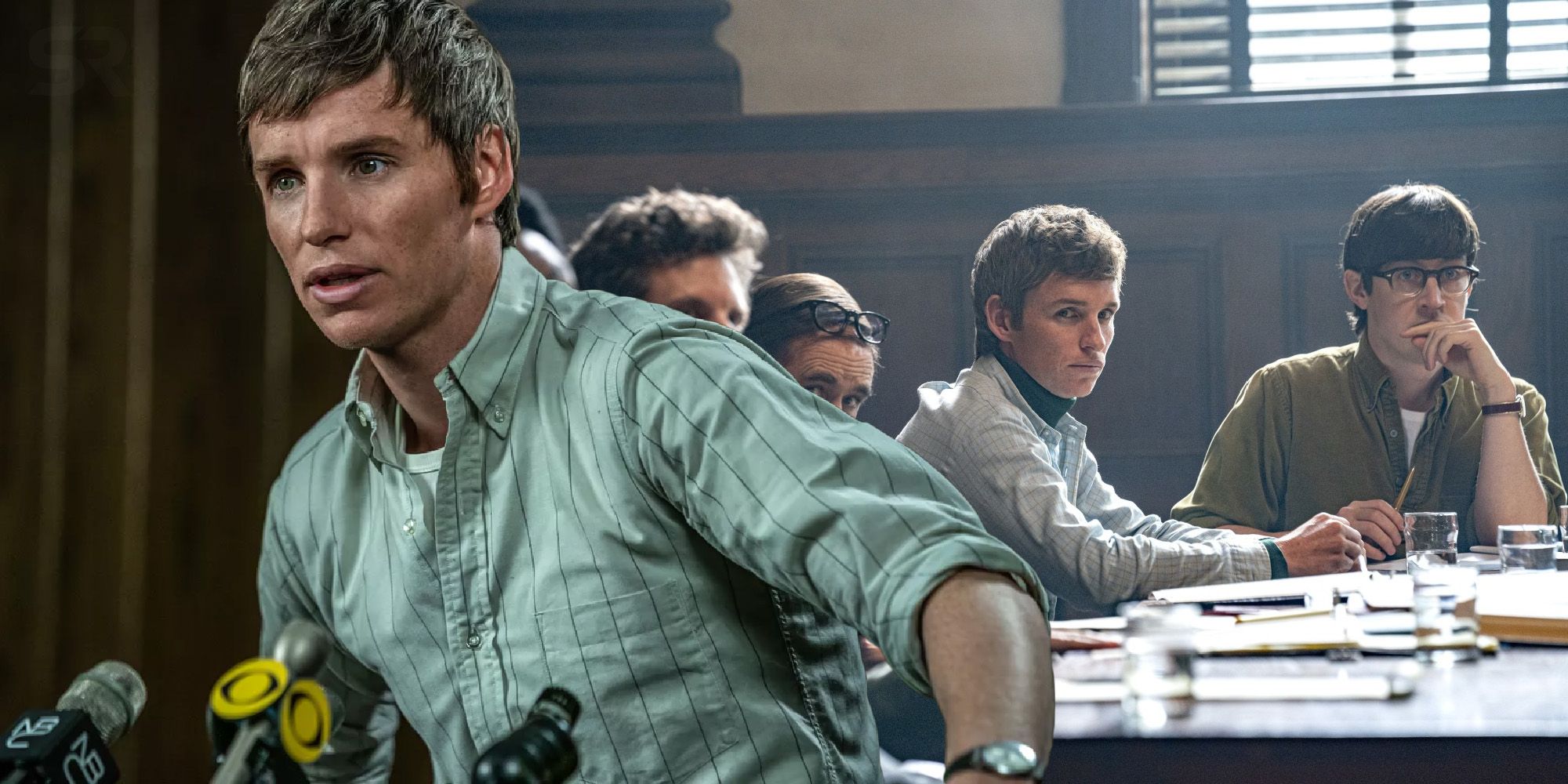 Aaron Sorkin’s The Trial of the Chicago 7 ends with what should be a stirring and triumphant speech, but instead it is the worst thing about the movie. Written and directed by Sorkin, the courtroom drama marks the second feature film from the famous screenwriter after 2017s Molly’s Game. The film depicts the chaotic true story of a group of anti-Vietnam War protest leaders who are charged with conspiracy and trying to incite riots in the streets of Chicago during the 1968 Democratic National Convention.

The titular trial begins about 20 minutes into the film, and the majority of The Trial of the Chicago 7 unfolds non-linearly as flashbacks are depicted on-screen during witness testimony, during stand-up routines from Abbie Hoffman (Sacha Baron Cohen) outside the courtroom, and during fiery exchanges between the defense attorneys and the defendants. Accompanying this approach to the story is Sorkin’s trademark razor-sharp and snappy dialog, which further heightens all these already tense conversations.

Related: The Trial of the Chicago 7: What Happened Next To Bobby Seale

Sorkin tackles the true story behind The Trial of the Chicago 7 with confidence and respect. Despite a few hiccups in stylistic choices (for example, Sorkin occasionally mistakes quick editing for kinetic storytelling), this is clearly a big step forward for Sorkin as a director, and it makes sense that he would feel more comfortable returning to the courtroom drama genre again. For the majority of the film, there is not much to quibble about in terms of craft or entertainment value. That is, until the ending, which unfortunately concludes this fascinating true story on an overwhelmingly passé note.

After a whirlwind of horrific flashbacks, tense cross-examinations, and an obnoxious number of contempt of court citations, The Trial of the Chicago 7 concludes with an eruption of applause that feels cheesy and false. At the end of the film, Judge Julius Hoffman (Frank Langella) allows only one defendant to make a closing statement. After all the histrionics and other disruptions that occurred during the trial, Judge Hoffman chooses Tom Hayden (Eddie Redmayne) to deliver the final remarks. Believing him to be the best behaved and least troublesome out of the 7 accused men, Judge Hoffman tells Hayden to deliver a speech that is respectful, remorseful, and brief.

Before Hayden begins speaking, Judge Hoffman clarifies that if Hayden delivers an appropriate speech, it will help in reducing their sentencing. Ignoring what the judge has told him and solidifying his position alongside his rebellious defendants, Hayden pulls out a notebook and begins listing off the names of the 4,752 U.S troops killed in the Vietnam War since the trial began.

When basing a film on such a famous historical event, it’s a gutsy move to create an ending that deviates strongly from real life. Furthermore, what may have worked for courtroom dramas in the 1990s now feels like a remnant of a bygone era. This type of anachronistic transplanting of something that would have worked wonders when Sorkin was writing A Few Good Men now comes across as corny. Couple that with the unnecessary departure from the true-life story and what is left is a hollow and disappointing ending.

And it’s not even as if the ending of The Trial of the Chicago 7 is entirely fictitious. It is true that during the trial, an attempt was made to read out the names of the fallen U.S troops in the Vietnam War. However, the speech came from David Dellinger (John Carroll Lynch) not Tom Hayden. Moreover, the names were read earlier in the trial, during the Moratorium to End the War in Vietnam on October 15, 1969, and it was put to a stop  very quickly. In a movie largely grounded in truth, the manipulation of rewriting history so that this speech causes the whole crowd to stand in applause while the judge bangs his gavel to no avail comes across as plain false.

Another issue with Sorkin’s The Trial of the Chicago 7 ending is that if he had just used the closing argument that William Kunstler (Mark Rylance) actually gave during the trial, he would still have concluded his film with some incredibly powerful words. The irony of this is that Kunstler’s real closing statements are arguably more relevant to today than the ending that Sorkin opted for. The director elected to go the path of melodrama, but in Kunstler’s final remarks, he raises issues like racism, poverty, and violence, all of which are still plaguing the United States today. In his words Kunstler says: [via UMKC]

“We are living in extremely troubled times, as Mr. Weinglass pointed out. An intolerable war abroad has divided and dismayed us all. Racism at home and poverty at home are both causes of despair and discouragement. In a so-called affluent society, we have people starving, and people who can’t even begin to approximate the decent life.”These are rough problems, terrible problems, and as has been said by everybody in this country, they are so enormous that they stagger the imagination. But they don’t go away by destroying their critics. They don’t vanish by sending men to jail. They never did and they never will.”

Outside the confines of the courtroom, it’s also possible to simply look at the actors at Sorkin’s disposal in The Trial of the Chicago 7‘s cast. Yes, both Eddie Redmayne and Mark Rylance are Academy Award winners, but the latter has proven his ability to serve as the empathetic core for movies such as Dunkirk or Bridge of Spies. Allowing such an accomplished and sensitive actor to read even a small excerpt from the impassioned speech given by Kunstler would have been a sure-fire slam-dunk ending for The Trial of the Chicago 7.

As Tom Hayden continues to read off the names of dead U.S soldiers, the music swells and the audience cheers, then text appears on-screen detailing the rest of the story. The information told is that five of the seven men charged were found guilty and sentenced to five years each in federal prison. However, the following line of text reveals the true happy ending of the story, where the Seventh Circuit Court of Appeals reversed that verdict.

Related: The Trial of the Chicago 7: What Happened To Each Character After The Ending

The film dramatization of the trial of the Chicago seven did not need a fake, melodramatic happy ending. A more-than suitable happy ending already existed in real life, but in the movie, it gets relegated to nothing more than text on the screen. If Sorkin’s version had ended showing the verdict from the Court of Appeals, the film would have concluded on a far more impactful note because it would have felt earnest and true. Instead, The Trial of the Chicago 7‘s ending trades in this earnestness for some unnecessary melodrama that cannot match the same emotional impact as real life.

Next: The 25 Best Films on Netflix Right Now

Friends: Every Character The Show Totally Forgot About
Related Topics

Sean Naughton is a writer currently residing in Evanston, Illinois. He will be graduating in the Spring from Northwestern University after studying Linguistics and Film. He enjoys all things film and has an eclectic taste ranging from the newest MCU film to 1960s Korean New Wave. His other hobbies include watching sports, losing in video games, and listening to 70s music and movie soundtracks.