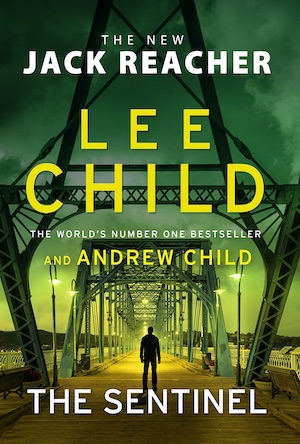 Although the sound of Santa’s sleigh is still well off in the distance, when November comes you can usually start to see how things will shape up in terms of the crime Christmas bookshelf. For example, Lee Child fans will be singing a jingle next week when the new Jack Reacher novel hits the shelves – it’ll make an ideal gift for crime fiction lovers everywhere. This week our new books column also features the first festive murder mystery, plus a serial killer thriller, a political thriller by former MP Tom Watson and something a bit different from the West Coast of Canada.

The Sentinel by Lee Child and Andrew Child

Back in January it was announced that the 25th Jack Reacher novel would be a collaboration between Lee Child and his younger brother, Andrew, who is already an established crime author under his birth name, Andrew Grant. The Sentinel is that novel, and in it ex-army man Jack Reacher gets off a bus in a small town near Nashville wanting a cup of coffee. He has no plans to stick around but while he’s there the town is crippled by a massive cyber attack. Reacher jumps in and teams up with local IT man Rusty Rutherford. Whoever’s behind the attack is after Rusty too, but with Reacher in town maybe they’ve bitten off more than they can chew… The Sentinel goes on sale 27 October.
Pre-order now on Amazon

Murder Most Festive by Ada Moncrieff

Now here’s a seasonal crime novel with a retro vibe that reaches right back to Christmas Eve, 1938. A party is in full swing, but the next morning – Christmas Day – the body of David Campbell-Scott is found in the snow. There’s a pistol next to him and, it seems, only his footprints leading up to the spot where he fell. ‘Why would a newly wealthy man just kill himself?’ wonders amateur sleuth Hugh Gaveston. He sets off to investigate, making for a wickedly cosy Christmas caper. Murder Most Festive is out on 5 November.
Pre-order now on Amazon

Thriller author Robert Bryndza has had huge success with his Erika Foster series, but Shadow Sands is the second to feature his new character, Kate Marshall. Following the case of the Nine Elms serial killer, Kate is back at work and finds the bloated body of a man in the Shadow Sands reservoir. Although the victim was a strong swimmer, he drowned, but what was he doing there in the middle of the night, anyway? Although the authorities want to label this death an accident, Kate soon suspects that another serial killer is operating – one who has been killing for decades and eluding capture. Shadow Sands lands on 3 November.
Pre-order now on Amazon

The House by Tom Watson and Imogen Robertson

Former minister and Labour deputy leader Tom Watson is trying his hand at crime fiction with – fittingly – a political thriller set in the halls of Westminster. Writing with Imogen Robertson, Watson puts Labour MP Owen McKenna at the centre of a scandal. He has been approached by a shadowy lobbyist who wants a favour, and promises to destroy McKenna’s reputation if he doesn’t comply. It all goes back to McKenna’s younger days when he was friends with Philip Bickford, now a Conservative minister and bitter rival. Years ago, something happened to their housemate, Jay, and McKenna and Bickford must team up or face a reckoning. It’s out now.
Buy now on Amazon

The Weight of Blood by DB Carew

Here we have some new Canadian crime fiction, care of DB Carew and the Pacific Coast indie publisher NeWest. Chris Ryder is a psychiatric social worker in Vancouver who finds himself involved in a murder case when a man with extreme autism is found covered in blood, standing by the corpse of an ice cream truck driver. Chris needs to use his skills to find out who the man is and whether or not he can tell the police anything about what happened. But the trauma of the case isn’t all he has to deal with. Chris’s half-brother Ray is stirring up a wasps’ nest of family issues and media enquiries into the case complicate matters even further for Chris. The Weight of Blood is out now as a paperback and on 1 November for Kindle.
Buy now on Amazon