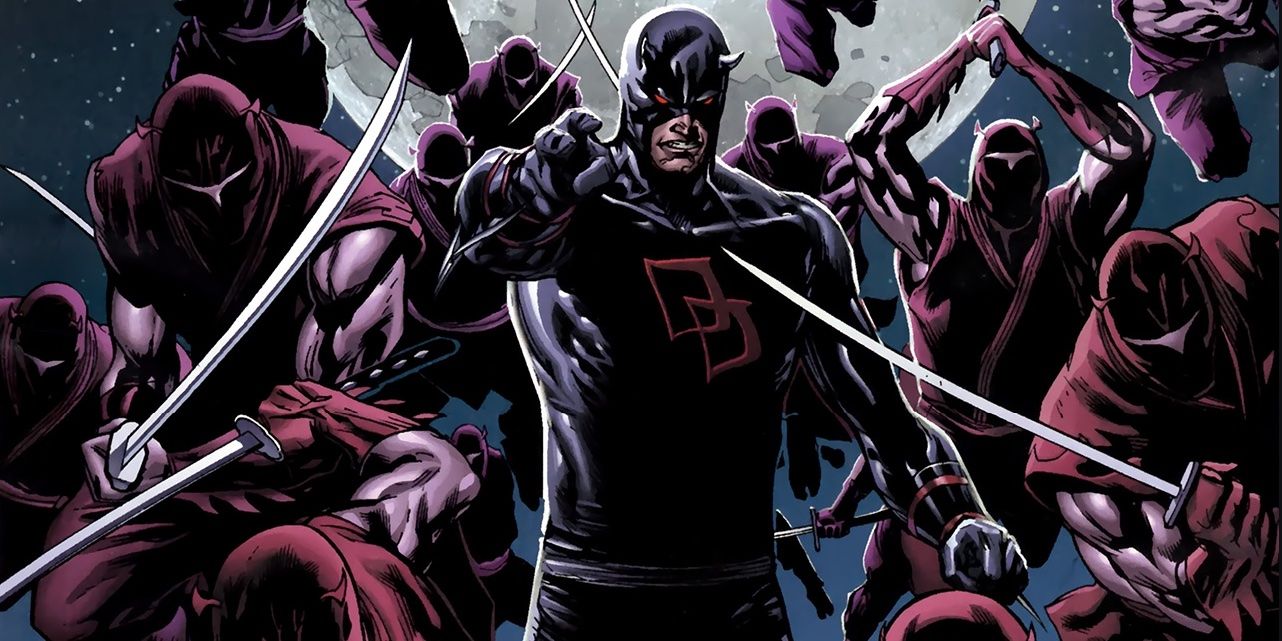 How big is the Hand, the premier ninja criminal organization of the Marvel Universe? In comparison to frequent enemies Daredevil and Elektra, the reach of the Hand seems limitless, using their global connections to move their forces in the shadows, striking as they see fit, doing all they can to eventually claim the world as their own. However, is the Hand a massive criminal empire on par with other Marvel groups such as Hydra or AIM, or are they simply posing as one, hiding their true and more spiritual goals just below the surface as a much smaller and more concentrated death cult?

The Hand was created by Frank Miller in 1982 during his run on Daredevil, formed to serve as the longtime rivals of the Chaste, a heroic group led by Daredevil mentor, Stick. While based in Japan, the Hand has enterprises and agents all over the world. Originally formed to be a group of samurai nationalists in the 16th century, the Hand was eventually coopted and corrupted by the ninja clan known as Snakeroot, who practice dark magic and serve a demon master they refer to as the Beast. The Hand eventually became mercenaries and assassins all over the world, expanding their influence and gaining power, gathering more and more agents and followers for their demon lord.

Any uncertainty around how big the Hand truly is comes from their practice of resurrection. When an agent of the Hand dies (or someone is killed by the Hand) they are able to be resurrected as the undead to continue serving the Beast. Therefore, it makes sense to ask whether the Hand is truly a massive criminal organization, or whether they’re a small group of leaders who essentially have a mindless army of undead warriors at their disposal. The latter may indeed be the case, seeing as how they are constantly seeking strong leadership from the likes of Elektra, who they resurrected for such a purpose. They even asked Daredevil to lead them, and he surprisingly accepted, hoping to turn them into a force for good in the Shadowland crossover event.

Daredevil is not the Hand’s only superhero enemy in the Marvel Universe. They have frequently clashed with the X-Man Wolverine, as seen in comics such as Enemy of the State, where HYDRA and the Hand teamed up to capture and resurrect Wolverine as their brainwashed weapon (until he broke their control and went on a revenge quest against them). Even more recently in “X of Swords”, Wolverine fought with the Hand in order to get his sword for the coming tournament, needing a blade forged by the immortal Muramasa, who the Hand had captured and taken to Hell itself to serve them and the Beast.

It’s more than likely that the Hand merely acts like a criminal empire, when in reality they’re just a small death cult of a few living members who happen to command an undead army. The leadership shown in Enemy of the State is closer to the board of a large company, and they don’t seem to consider their undead soldiers to be real people – Marvel’s heroes certainly don’t, with even the less deadly superheroes happy to mow them down in ways that would be fatal to living enemies. Little middle-management has been suggested, so if the Hand’s ninjas aren’t truly alive, the Hand is actually only as large as a regular super-villain team like the Masters of Evil, and nowhere near as big as operations like Hydra and AIM, which have extensive infrastructure. But despite this fact, the size of their living and free-thinking membership is irrelevant to their power so long as they have the resources and manpower to back up their control. It’s unlikely Marvel Comics will set a firm number on the Hand anytime soon, but Wolverine did once pledge to wipe the organization off the face of the Earth – a goal which seems a lot more achievable if he’s prepared to focus on the leadership over the foot soldiers

More: How Many Vampires Exist in The Marvel Universe?

Kevin Erdmann is one of Screen Rant’s staff writers. With a major in Cinema Studies and a minor in Comics and Cartoon Studies from the UofO, Kevin is pretty sure he’s writing for the right site. While Kevin is a huge Marvel fan, he also loves Batman because he’s Batman and is a firm believer that Han shot first. Disney also shares a big part of his fan patronage. Previously, Kevin was a writer for ComicsVerse.com. Kevin lives in Oregon with his wonderful wife and sinister cat who is no doubt currently plotting his demise.