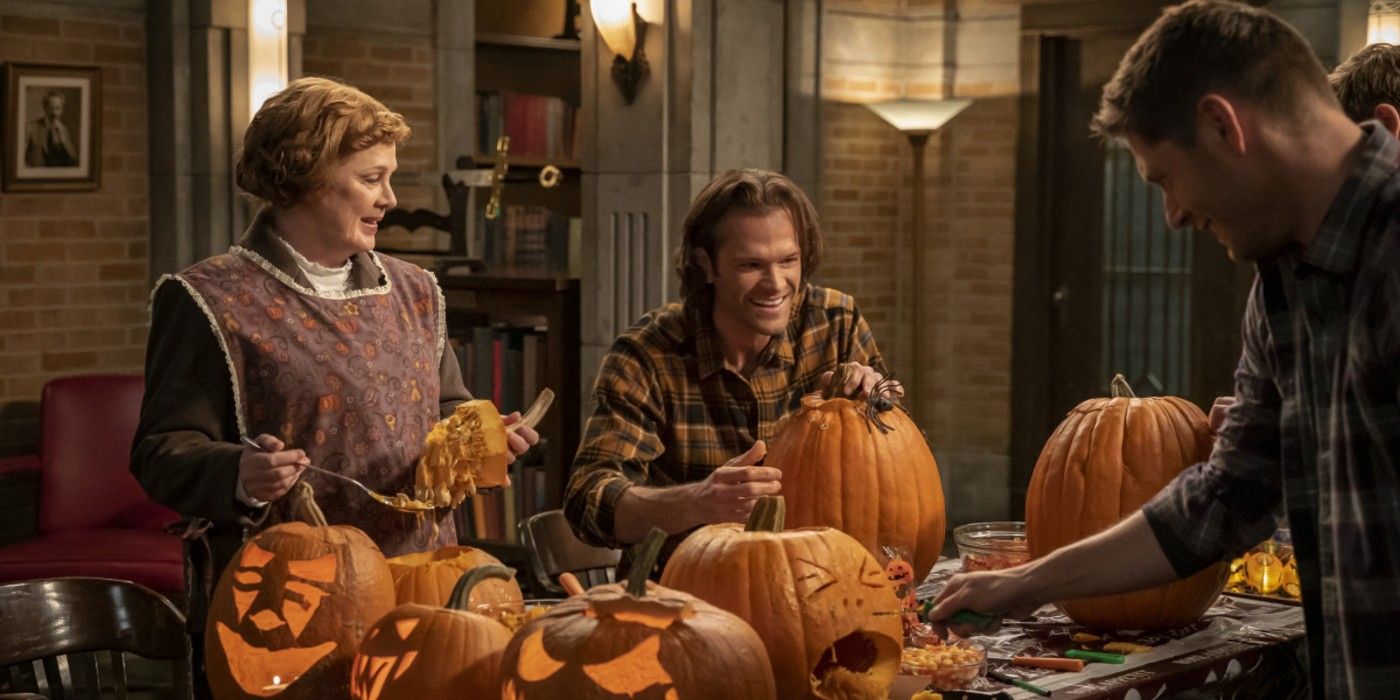 Supernatural creators recently gave fans a first look at the Winchesters’ return in season 15 with a set of promotional photos that show Sam and Dean carving pumpkins in the upcoming episode “Last Holiday”. Supernatural went on hiatus earlier this year when filming was stopped due to the coronavirus, but is coming back strong for its last episodes, which are scheduled to air weekly starting on October 8th. With the finale set for release on November 19th, 2020, Supernatural has a lot to do before it brings an end to fifteen years of the Winchesters’ adventures.

Supernatural was one of the first shows to return to production in Vancouver, and just a few days ago, stars Jared Padalecki and Jensen Ackles posted emotional farewells on Instagram after filming the show’s last episode. Supernatural only has seven episodes left, but the characters are stuck in a difficult position as season 15 has so far seen the Winchesters, Castiel, and Jack prepare to face up against God, who was planning on destroying the universe.

As season 15 is resuming next month, the CW has been posting many promotional features to generate more hype for the last seven episodes of the show. Recently, the first collection of new still images (hat tip CBR) taken from the remainder of Supernatural’s season 15, which show Dean in purple pajamas and the Winchesters carving pumpkins and sharing a Thanksgiving dinner. Take a look at the photos below:

These still images seem to suggest an optimistic atmosphere in the upcoming episode “Last Holiday”, which would somewhat deviate from the show’s usual dark and gory themes, though the show has grown more humorous in recent seasons. The photos also introduce a new character, who, judging by the episode’s synopsis, is likely a wood nymph living in the Winchesters’ bunker that doesn’t look overly threatening. Furthermore, viewers can notice that Castiel is absent from the images, meaning that he may be off handling a dangerous task while Sam, Dean, and Jack stayed behind.

Supernatural is known for its frightening monsters and tragic storylines in which fan favorite characters often meet violent demises, so perhaps a lighthearted episode about the Winchesters celebrating the holidays is much needed for the fans and characters alike. The last season of Supernatural will likely feature many unexpected twists and touching moments, especially as many viewers have been theorizing that the show will probably end with Sam and Dean finally dying off for good. Despite what happens in the remainder of season 15, fans should look forward to seven more thrilling and powerful episodes when Supernatural returns on October 8th.

Annie Yin is a third year student at Tufts University studying Film and Media Studies and International Relations, currently on a gap semester and writing for Screen Rant. She has previously worked at China Central Television (CCTV), Hifu Services Communications, and SECA Worldwide Sports Media as a Journalist. Annie has lived in Boston, Singapore, Shanghai, and Beijing, and loves writing, traveling, watching movies and binging TV shows, and taking walks with her French bulldog Louie. You can find her on Instagram @annieyin_.