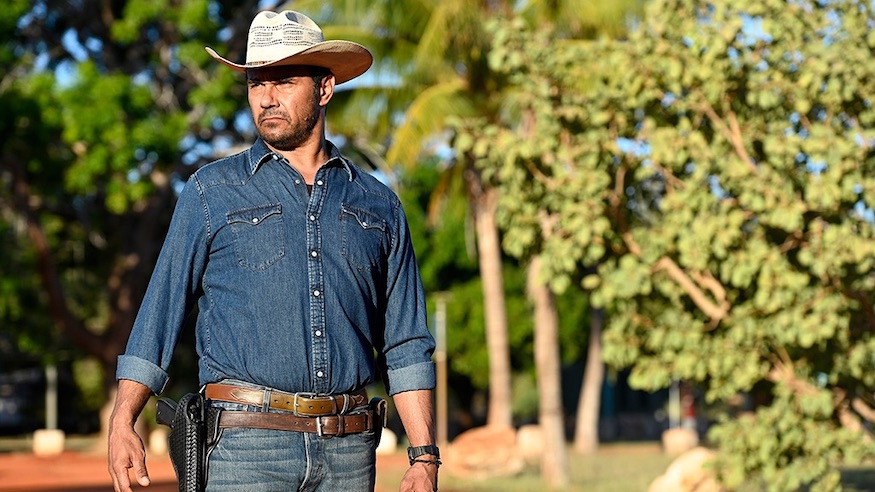 Saturday 19 September is a date UK crime fiction lovers simply must put in their diaries. At 9pm, BBC Four will be airing the first episode of Mystery Road season 2. The gripping, atmospheric and socially aware Australian crime show is back, and once again it has a storyline that looks like it packs a punch.

Following its run, you’ll also be able to grab it on DVD from 5 October care of Acorn Media International. A season 1 and 2 box set will also be available.

The star once again is Aaron Pedersen, playing Jay Swan, a detective with Aboriginal blood in his veins who always tries to do the right thing but occasionally battles with alcohol addiction. He’s called out after the discovery of a headless body in the coastal mangroves by the remote town of Gideon in the Outback – where the flaming desert meets the cold ocean. His colleague Fran (Jada Alberts) helps him investigate but the case is at the centre of local conflict.

At first the killing seems drugs related. However, Indigenous people are being evacuated, protests are erupting, and pretty soon another body turns up. The land is sacred to the local people, but is being excavated for minerals, and Swan and the law are seen by many as being on the side of the white invaders. It’s a case mirroring recent news stories such as Rio Tinto’s destruction of two caves important to Aboriginal people. Are the murders linked to the excavation?

An exciting inclusion in the cast is Sofia Helin, famous for her role in all four seasons of the Scandi noir hit The Bridge. She plays Claire Sims, an archaeologist carrying out research on Aboriginal heritage in the area. Could her skills help Swan solve the mystery?

Then there is the detective’s personal life. His ex-wife Mary (Tasma Walton) returns following the strife between them, and their daughter, in the first series.

The Mystery Road TV productions follow on from Ivan Sven’s 2013 film of the same title. Season two aired in Australia in April 2020, and consists of six episodes.