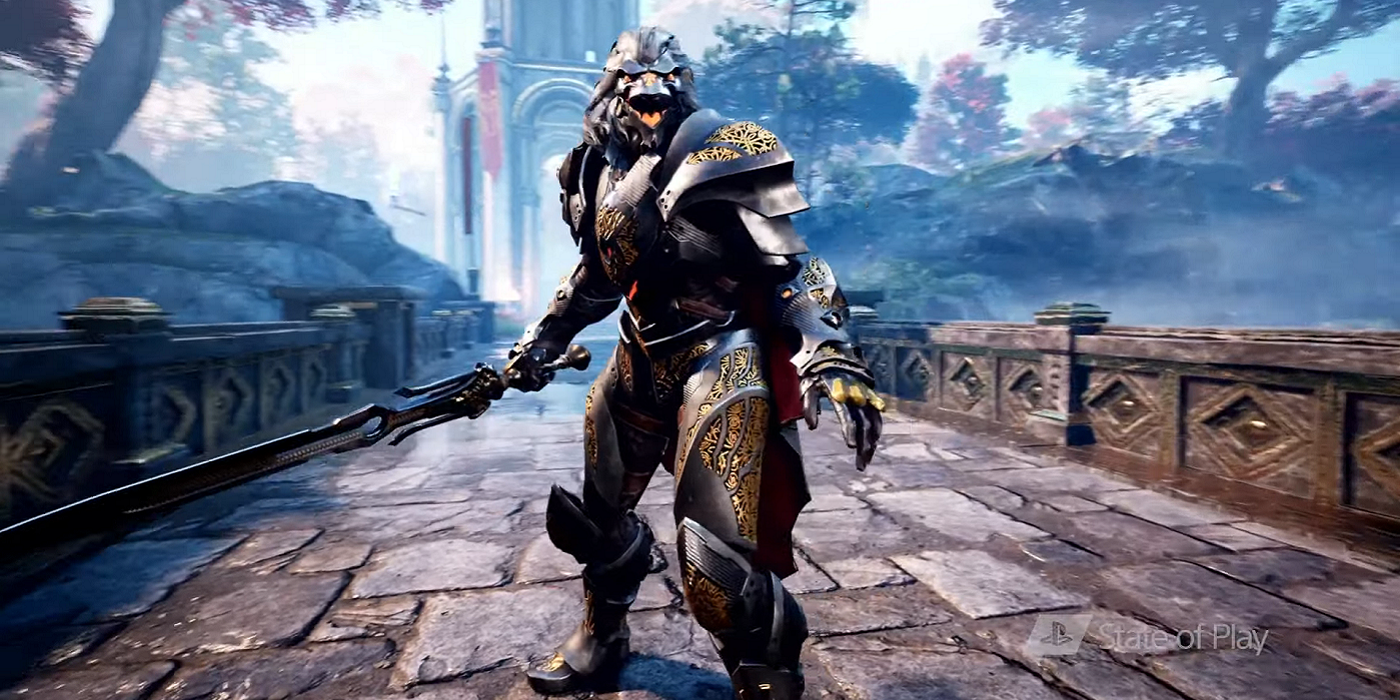 During the most recent State of Play for Sony PlayStation, a new trailer dropped that detailed all new information about Godfall, the “looter slasher” developed by Counterplay Games. With a fresh take on the looter genre, Godfall hopes to bring the moment-to-moment combat of hack and slash games with the popular loot grind of games like Destiny 2 and Borderlands 3. During this new trailer, Game Director Kieth Lee outlined many new facets of gameplay, including a deeper dive into the different weapon types Godfall offers. Here is everything we know about Godfall’s weapons and what makes each of them unique.

Players will take control of characters called Valorian Knights. These knights are some of the few capable of wielding suits called Valorplates. Like Warframe, these Valorplates determine player abilities and character features, but not the weapons they wield. The five different weapon classes available include Long Swords, Dual Blades, Polearms, Two-Handed Warhammers, and Two-Handed Greatswords. Counterplay has made it clear that all gear will be available to players via gameplay with no microtransactions. During this preview, players learned a great deal specifically about the Dual Blades, the Long Sword, and the Shield that they can use alongside these powerful weapons.

Related: Everything We Know About Godfall

The Dual Blades are the fastest weapon type in Godfall. Focused on speed, mobility, and fluidity, the Dual Blades are meant to be a quick way of dispersing squishy, unarmored targets en masse. Players should avoid using Dual Blades against the larger tank units since they are unlikely to stagger in the face of the quicker, but softer hits.

Dual Blades also have their own specialized move set. If players execute four light attacks in a row, this can be followed up with a heavy Cyclone finisher attack that does high area of effect damage. According to Lee, Godfall’s Dual Blades also build up a charge while in use and this charge can be expended by using Inner Focus to deal massive damage to a single target. Finally, the Dual Blades have access to Mortal Coil, which launches a chain at an enemy and yanks them towards the player. This kind of space-closer is extremely useful against ranged enemies trying to keep their distance.

The second weapon described during Godfall’s presentation is the Long Sword. A balanced weapon that is described as having “crisp damage and simple cooldowns,” it is likely that Long Swords will have wide appeal for players new to the genre. Like the Dual Blades, the Long Sword has a four-hit light attack combo that can be followed with a heavy attack finisher.

Both of the Long Sword’s unique abilities are damage-driven. The Spectral Flurry attack is an uninterruptible series of attacks that allow the Valor Knight to dash around the battle without fear of a blocked attack. Next is the Spiral Technique where wielders of the Long Sword dash forward dealing massive damage to all enemies in a straight line. Precise timing and aim will lead to devastating effects in Godfall.

Finally, there is the Shield. While not technically a weapon class on its own, Godfall’s Shield will play a pivotal role in player survivability and damage output. Well-timed blocks with the Shield allow players to follow up with a brutal counter-attack. The Shield can also be thrown Captain America-style to damage multiple enemies at a distance. If players time a button press precisely when they catch the returning Shield, a damaging wave will burst out around them. Players can also stun nearby enemies opening them up for attack and finish down enemies with a decisive smash.

Lee finished this preview by teasing a future trailer that will outline the other weapon classes in more detail as well as how weapon progression works. It will be interesting to see how the slower, two-handed weapons can be used compared to the quicker, sharper weapons discussed here. There is currently no release date for Godfall as it is likely tied to the yet unannounced release of the PlayStation 5. Godfall will release on both next-gen PlayStation as well as on PC exclusively through the Epic Games Store.

Next: How Godfall’s Combat Works (& What PS5 Gameplay Looks Like)

Selling Sunset: How Did Cast Members React To Chrishell’s Divorce?
Related Topics
About The Author

Tyler starting writing on his own personal blog focused on gaming supplements. With a background in Biology and Kinesiology, he went on to write for larger publications such as Bodybuilding.com, and PCGamer.com. When it comes to gaming, Tyler is a man who lives for the grind. Too many nights over the years have been spent looting, shooting, and general “shenaniganizing” in games like Destiny, The Division, Borderlands, and more. Yes, he enjoyed Anthem, and yes he would love to hear your reasons about why he’s wrong.

Trump minion Mike Pompeo set to use UN general assembly to roll out his global assault on LGBT+ rights
Rob Zombie Pays Tribute to Sid Haig One Year After His Passing
Shop Fall Essentials From Uniqlo U’s New Arrivals
Halloween Costumes Inspired by Emmy Nominated Shows
I Went Back To A Movie Theater For The First Time Since March, And It Was Weird