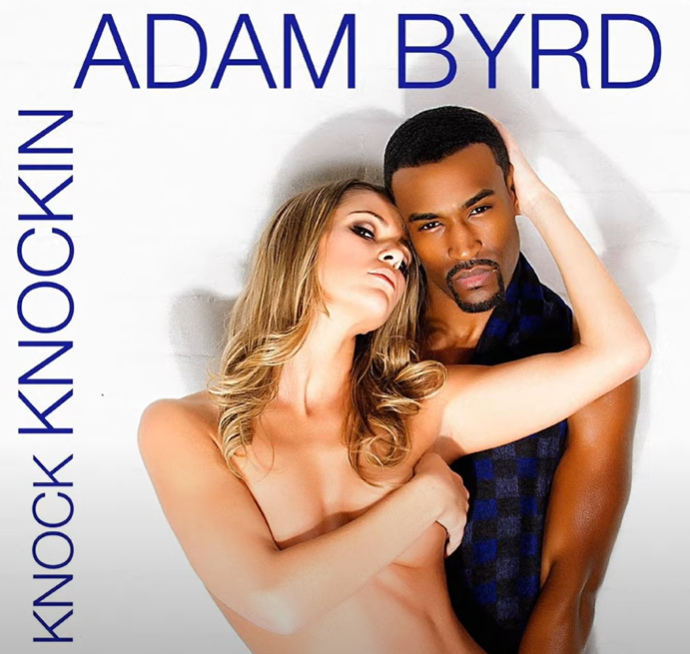 In Adam Byrd’s debut single, “Knock Knockin,” the R&B singer/songwriter isn’t pulling out any props or fluff in hopes of dazzling us with the sort of frills that a lot of his rivals would just as soon rely on for such an endeavor. Instead, Byrd is delivering a harmony-based recording that fuses elements of a post-new jack swing R&B with sophisticated, atmospheric melodies that have been mostly relegated to the realm of trip-hop, lo-fi and indie rock. “Knock Knockin” has the stylization of a big budget single with the conceptualism of a truly independent release, and though it’s coming up against a lot of competition in the underground this summer, it’s one of the more memorable tracks I’ve come across lately without question.

The rhythm is indulgent, decadent and impossibly rich in spots, but it’s precisely what these lyrics needed to feel complete and intimate. There’s a lot of passion to Byrd’s delivery, but by choosing to utilize every element within the backdrop as a means of advancing his narrative further, it’s incredibly difficult to walk away from “Knock Knockin” without feeling something. The percussion spots some physicality, as does the bassline, but I would stop short of saying that they dominate the mix with their sheer muscularity. For all of the brawn in the beats here, the melodies up front always remain the main focus, which, when you think about it, isn’t always the case with tracks of this style. Adam Byrd might be a new face to critics and listeners, but he’s not acting like a wide-eyed rookie here at all.

From the moment that we make contact with his vocal for the first time forward, there’s never an instance in which this singer sounds anything but swaggering in his performance. None of the greenhorn inconsistencies that I’ve grown used to hearing in material recorded by up and comers in Byrd’s peer group is present in “Knock Knockin;” in its place, there’s a sense of pride and ease behind the microphone that a lot of this player’s contemporaries could stand to learn a thing or two from. He’s got the skills to turn the lights out with his melodic attack, but his disciplined approach circumvents a lot of the negative excesses that typically plague a venture as ambitious as this one is.

At a little over three minutes in total length, it’s probably sage to say that “Knock Knockin” won’t be the longest R&B single you listen to before the summer of 2020 has come to a conclusion, but if one thing is for sure, it’s that this song is undeniably one of the more rhythmically robust numbers to debut in the last month. Adam Byrd packs one heck of a strong punch here, and if it’s indicative of the kind of play he’s going to bring to the game from this moment on, I will be following his future output for sure. I like where he’s going with the cerebral harmonies in this virgin outing, and with any luck, he’ll experiment with them again in his follow-up.

Joan Baez to Receive Kennedy Center Honor
“Kamala” from Darrell Kelley
Mike Pence’s home state could be the next to finally ban traumatising conversion therapy
Ranking All of the Unforgettable Sex and the City Relationships, From Skipper to Mr. Big
Braunwyn Windham-Burke Regrets Hitting Her Husband Sean Burke, But She’s Upset Over Being “Constantly Judged And Criticized”