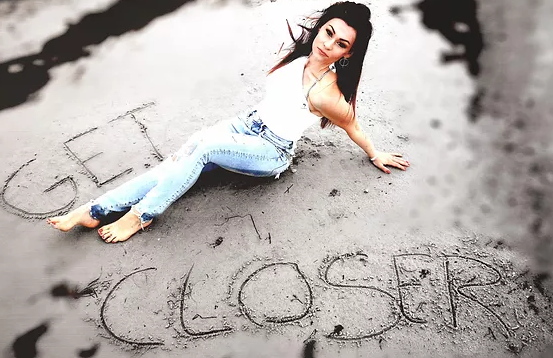 Soft but profoundly brooding, the vocal that Arina Mai lays down in her new single “Get Closer” is perhaps the brightest star in this incredible track, but don’t get me wrong – it’s hardly the only reason why I would implore pop connoisseurs to get out and give it a listen this summer. As anyone who follows the genre’s storied underground is more than aware by now, pop’s more experimental characters have been making some big waves in the last few years, particularly on the European side of the Atlantic, and this Danish singer and songwriter is definitely arriving at the right moment in history. While her sound isn’t the most avant-garde you’ll hear in 2020, it’s undeniably a step outside the mainstream model, which is something most listeners – myself included – are craving this season more than anything else.

The rhythm here develops an urgency that only swells as we get deeper into the song, but no matter what the pace or energy of the instrumentation is, there’s scarcely an instance in which Arina Mai sounds anything but calm, cool, collected and in complete control of where the song is taking us. Her focus is something to be marveled at all by itself, and considering the fact that this is one of the first songs she’s recorded to make it over to American shores, there’s not a doubt in my mind that her powerful performance in “Get Closer” will go a long way towards establishing herself as a premier player on the international level.

In utilizing a conservative approach to the percussive arrangement in this track, there’s an argument to be made that Arina Mai was able to leave a lot more room in the mix to get virtuosic with her singing (which she does rather seamlessly here). There’s not a lot of color to the actual beat, but when she starts to croon, it’s as if every part of “Get Closer” – both melodic and mechanically required alike – feels like a different intricate part in a rainbow of emotionality and evocative tones. It’s a bit more complicated a formula than it needed to be given that Mai is already such an amazing singer without any additional help, but at any rate, it’s giving her one heck of a cinematic introduction to American audiences this season.

If Arina Mai continues to produce on the same level she is in this single, I think she’s going to be finding superstardom a lot sooner than later. She’s got all the right chops to deliver a thunderously melodic performance – that much is clear even at a distance when listening to “Get Closer” – and with a little more time and space to develop her sound even more than she already has here, I believe she (and her professional momentum) could be unstoppable. I’ll be following her progress from here on out, and I would strongly recommend that fans of the emerging pop genre of 2020 think about doing the same.