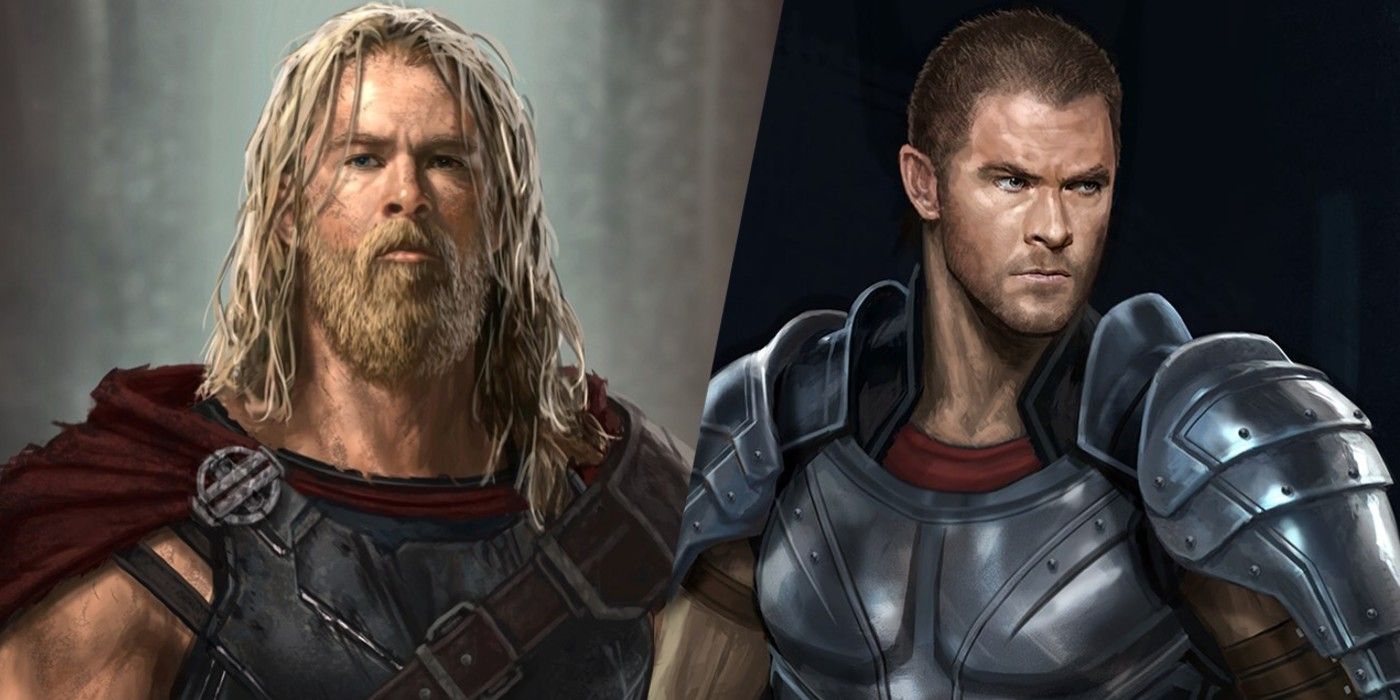 New Thor: Ragnarok concept art reveals two very different makeovers for the God of Thunder. After a rocky start, the MCU sub-franchise found new life under director Taika Waititi. Unlike the character’s first two solo films, gone was the dark and gloomy palette and in its place were the trippy backgrounds that perfectly complemented the hero’s newfound humor. To match his overhauled personality, Thor also got a fresh look which stuck around until the events of Avengers: Infinity War and the beginning of Avengers: Endgame.

Marvel Studios’ gamble to significantly change one of their most prominent heroes paid off. Ragnarok was a success both critically and at the box office, officially becoming the best out of Thor’s own trilogy. It also paved the way for his journey facing Thanos (Josh Brolin) in the succeeding Avengers movies. Had things turned out differently, however, the God of Thunder would’ve sported very different looks in the Waititi-directed film as evidenced by newly released images.

Shared by Marvel’s director of visual development Andy Park are a couple of concept art pieces he made for Ragnarok, both depicting how Thor was going to look in the film. In the first image, he explains that Waititi was looking to see the headlining character be gruffer, with longer facial hair at the beginning of the movie. The second illustration, on the other hand, depicts what he would’ve looked like after Stan Lee gave him his hair cut in Sakaar. Check them out below:

Both of these looks obviously didn’t make it on the big screen, but it’s an indication of how open Marvel Studios was open to changing things up for the God of Thunder in Ragnarok. This is particularly interesting considering that the movie was already Thor’s third standalone outing, and by their previous standards, should’ve been his final solo movie. Drastically changing every aspect of the character didn’t really have any bearing for his future since it was supposed to finish his trilogy of movies. However, the success of the movie – as well as his growing popularity following his personal story in Infinity War and Endgame - altered Thor’s perceived MCU fate. Now, he’s up for a fourth solo project with Thor: Love and Thunder which would reunite him with director Waititi. Tessa Thompson’s Valkyrie will also return after debuting in Ragnarok, as well as Natalie Portman as Jane Foster, not seen in the franchise since Thor: The Dark World.

In hindsight, Thor: Ragnarok was a turning point for the God of Thunder. Who knows how his fate would’ve panned out in Endgame had it not been for people’s renewed interest in the character? After another physical transformation in the Joe and Anthony Russo-directed movie – becoming Fat Thor - it’s curious if the character is up for another one when he returns on the big screen for Love and Thunder. In any case, fans are eager to see him back in the MCU.

More: Endgame’s Return To Battle of New York Showed How Each Avenger Changed

Love Is Blind’s Jessica Batten Debuts New Boyfriend on Fourth of July
Splash Mountain: 6 Princess And The Frog Elements The Ride’s Disneyland And Disney World Redo Needs To Include
Amanda Kloots Addresses “Negativity” on Her Instagram Amid Nick Cordero’s COVID Recovery
‘I Still Know What You Did Last Summer’ Is a Slice of Silly Slasher Cheese [We Love ’90s Horror]
Summer 2020’s Best Perfumes