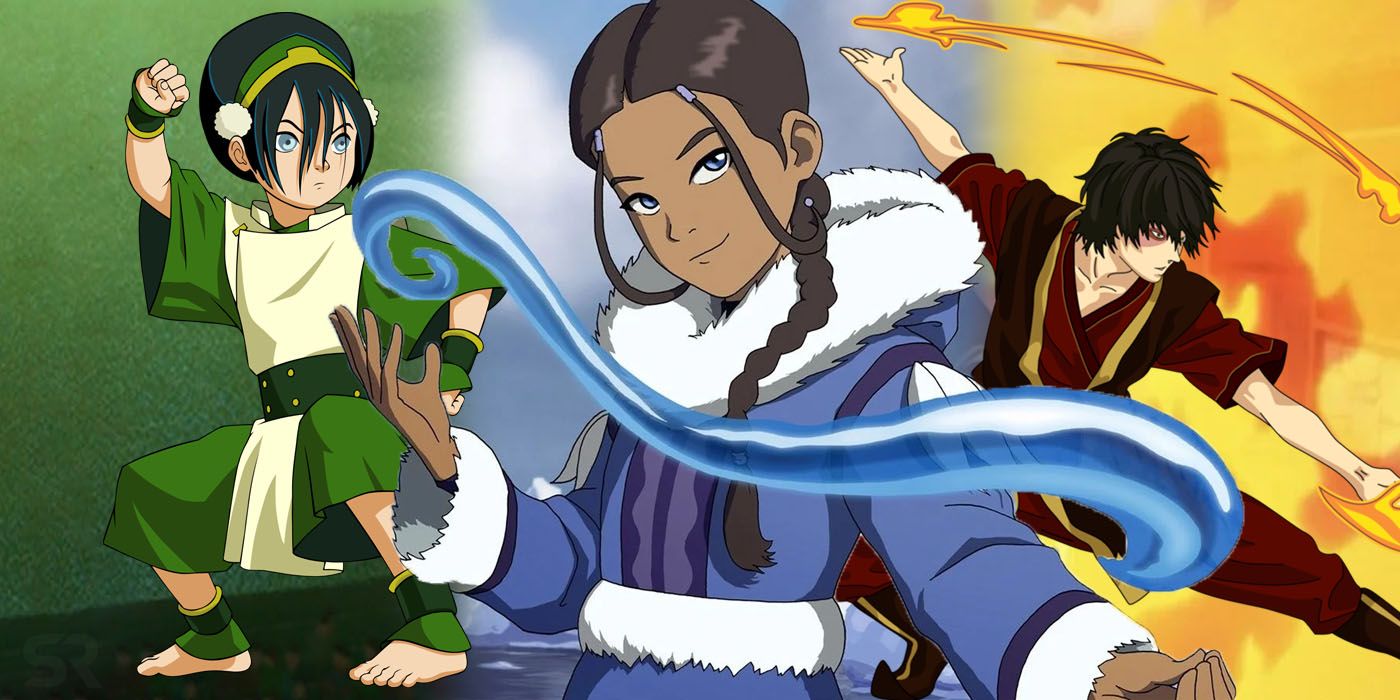 Avatar: The Last Airbender features four main types of bending: fire, earth, water, and air – but each of them have their own unique specialities as well. Avatar: The Last Airbender, which aired on Cartoon Network from 2005-2008, is one of the most beloved animated shows of all time, and is now finding new fans after being added to Netflix. The show takes place in a world where some people are born with the ability to “bend,” or manipulate one of four elements.

The show’s protagonist, Aang, is a uniquely gifted being called the Avatar, who is only born once in a generation and has the ability to control all four elements, not just the one of the nation they were born in. Together with Water Tribe siblings Katara and Sokka, blind Earth Kingdom prodigy Toph, and (in season 3) troubled Fire Nation Prince Zuko, Aang embarks on a quest to bring peace to the four nations.

Related: Iroh vs. Ozai: Which Avatar Firebender Is More Powerful

Bending is one of the core elements of the show, but there are more than just the four basic types of bending. Each type – fire, earth, water, and air – has its own unique subset of bending-related abilities that help both in and out of combat, including everything from lightning generation to healing. Here’s the complete list of each type of bending ability featured on Avatar: The Last Airbender.

The first category of bending is airbending, the power set belonging to the Air Nomads. We find out via flashback that prior to the events of Avatar: The Last Airbender, the Air Nomads were all but wiped out of existence by the fire nation, who were looking to kill the Avatar – Aang. However, unbeknownst to them, Aang survived, and audiences got their first taste of what powers belonged to the Air Nomads.

The main ability of the Air Nomads is, of course, airbending: the ability to control and manipulate air. This is most often visualized in the form of wind: airbenders can create strong gusts, propel themselves, and create balls of compressed air to use as projectiles. Other than classic airbending, some airbenders can also manipulate clouds, because they’re composed of mostly air. Advanced airbenders (like Aang) can also harness their abilities to spiritually project – send their consciousness outside their physical form – although this ability is strongly tied to their spirituality as opposed to their bending.

One of the rarest forms of bending featured on the show is Aang’s energybending – a unique power that gives the user the ability to bend another person’s life energy. Aang uses this ability to defeat Phoneix King Ozai in Avatar: The Last Airbender‘s finale. This ability technically predates all other forms of bending, and Aang is apparently the first human to use it (thanks to being taught by the lion turtle). In that sense it’s separate from all the other elements of bending, rather than being a discipline of airbending.

The second type of bending featured on the show is waterbending: the ability belonging to the Water Tribe. In The Last Airbender, waterbending is most prominently displayed through Katara, Aang’s loyal friend and one of the show’s protagonists. Just as it sounds, waterbending is the ability to control water: users can manipulate existing bodies of water like lakes and rivers while also drawing water to fight with, from things like plants or (in some cases) condensation in the air.

The most controversial type of waterbending is bloodbending: the ability to control the liquid in a person’s body to manipulate them physically. It’s a skill frowned upon by many waterbenders, and Katara learns it from Hama, who was cast out of her tribe because of her bending. During the events of Avatar, the only way bloodbending can be successfully performed is with the aid of a full moon, which enhances the natural abilities of most waterbenders.

The third type of bending (and often most frequently associated with evil) is firebending. Firebending is the ability to create and manipulate fire, and is the trademark of the Fire Nation, who serve as the primary antagonists of The Last Airbender. Firebending is the most aggressive and unpredictable form of bending, which is reflected in the temperament of its users. Azula and Zuko are two of the most prominent examples of firebenders, and both of them have short tempers.

Related: Avatar: What Happened To Zuko’s Mother In The Last Airbender

Other than the manipulation of fire, firebending also includes lightning bending, as most frequently demonstrated by Azula. Combustionbending (as demonstrated by the assassin Combustion Man) is the ability to create fires and explosions with one’s mind as opposed to arm motions, and is a rare and often dangerous ability derived from a tattoo on the bender’s forehead. Another rare firebending ability is energy reading – the ability to sense chi paths and spiritual energy – which is similar to waterbender’s healing.

The fourth and final form of bending is earthbending: the primary ability of the Earth Kingdom. In The Last Airbender, the primary earthbender featured is Toph Beifong, one of Aang’s traveling companions. Earthbending at the base level consists of the manipulation of earth and rock, and unlike other abilities, it does not involve the summoning of an element like fire or air – earthbending is performed purely through contact with an existing element.

Earthbenders have the ability to bend sand (known as sandbending) as well as mudbend, when aided by a waterbender. One significant ability specific to earthbenders is lavabending, which operates similarly to how waterbenders bend ice – earthbenders can solidify and resolidify lava at will. The most advanced type of earthbending is metalbending: an ability discovered by Toph herself, which is based on the principle that metals are formed from ore mined from the earth. Another ability specific to Toph is seismic sense – the ability to gauge her surroundings by feeling the vibrations in the earth through her bending, which she developed as a substitute for sight.

More: Avatar: Will The Last Airbender Season 4 Ever Happen?


Suicide Squad 2: Why Will Smith’s Deadshot Isn’t Returning For The Sequel
Related Topics
advertising
About The Author

Lauren Coates is a features writer for Screen Rant with a special interest in Star Trek, and has been writing for Screen Rant since 2019. In addition to Screen Rant, she has written for The Mary Sue and the official Star Trek website, and also writes film & tv reviews for Culturess.
Lauren is currently a student at DePaul University, majoring in Film & Television and minoring in Journalism. At DePaul, she is also a contributing writer for the student-run newspaper, The DePaulia. In addition to writing, Lauren is passionate about Disney World, junk food, musical theatre. You can find Lauren on Twitter and Instagram under @laurenjcoates

Book Riot’s Deals of the Day for May 30, 2020
Why Caelynn Miller-Keyes Was “Hurt” After Hannah Brown Became The Bachelorette
Bachelor Nation’s Madison Prewett: Inside My Self-Care Routine
Lady Gaga says she had her $30 million diamond necklace confiscated on a Taco Bell trip after ‘barrelling through champagne’ and partying with Madonna
YNW Melly Associate YNW Bortlen Granted Release on Bond