It looks like Miley Cyrus is enjoying the single life again, and so is newly single Kaitlynn Carter.

On Saturday evening, E! News confirmed that the 26-year-old singer and Liam Hemsworth decided to call it quits, after being married for nearly eight months. Her rep said in a statement, “Liam and Miley have agreed to separate at this time. Ever-evolving, changing as partners and individuals, they have decided this is what’s best while they both focus on themselves and careers. They still remain dedicated parents to all of their animals they share while lovingly taking this time apart. Please respect their process and privacy.”

Hours before news of the breakup was announced, the “Wrecking Ball” singer was seen kissing Carter, whose own split from partner Brody Jenner was recently made public as well.

The two were photographed during their girls’ trip to Lake Como, Italy, where they were also joined by Miley’s sister Brandi Cyrus and friends, and they were certainly packing on the PDA. From the snaps, posted by ET, Cyrus and Carter were spotted making out, cuddling and soaking up the sun by the water in itty-bitty bikinis.

The PDA comes months after Miley told ELLE a few months ago, “I’m in a hetero relationship, but I still am very sexually attracted to women.”

The singer, Kaitlynn, and Brandi have been sharing behind-the-scenes moments of their Italian getaway on social media.

“Girls Trip,” Brandi wrote on Instagram on Friday, alongside a selfie with her gal pals on a boat.

“The only kinda trip,” The Hills: New Beginnings star responded. 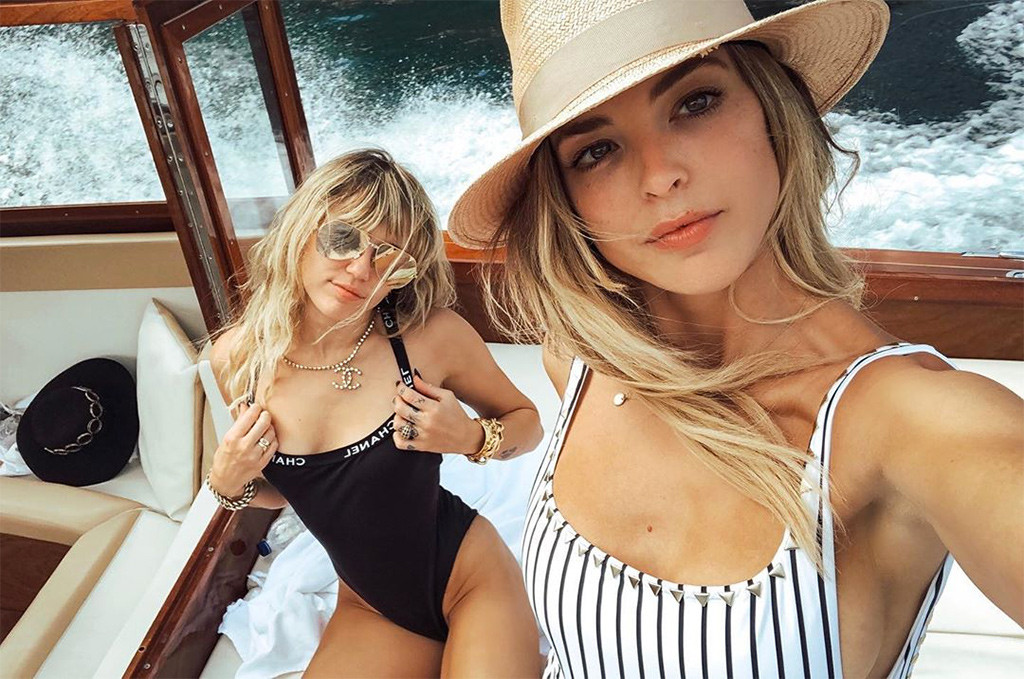 Additionally, the reality TV personality snapped a sultry selfie of her and Miley enjoying a boat ride.

The photo was so on point, Kaitlynn’s ex and Hills co-star Brody commented. “Hot girl summer,” he quipped.

Miley is not wearing her engagement or wedding ring in the photo—which had at the time sparked speculation of trouble in paradise with Liam.

A separate source told E! News the two have been “drifting apart.”

“They have been trying to make it work for months now but haven’t felt they were connecting on the level they were feeling when they got married last year,” the insider explained. “It’s been a rough year.”

It seems the longtime couple was in different places, too. According to the source, the Hunger Games actor is “focused on a more simplified lifestyle while Miley has been preparing for a new wave of her music career.”

The insider added, “She has been ready to put out music and be back in the game touring and performing. They really grew apart,” the source dished. “Miley and Liam have still been communicating and it wasn’t a messy split but they have decided they are at different points in their lives currently.”

Brody and Kaitlynn’s split was announced earlier this month. Reps for the two confirmed the breakup to E! News. “Brody Jenner & Kaitlynn Carter have decided to amicably separate,” the statement read. “They love and respect one another, and know that this is the best decision for their relationship moving forward.”

While the two got married in Indonesia last June, a source told E! News they were never legally married.